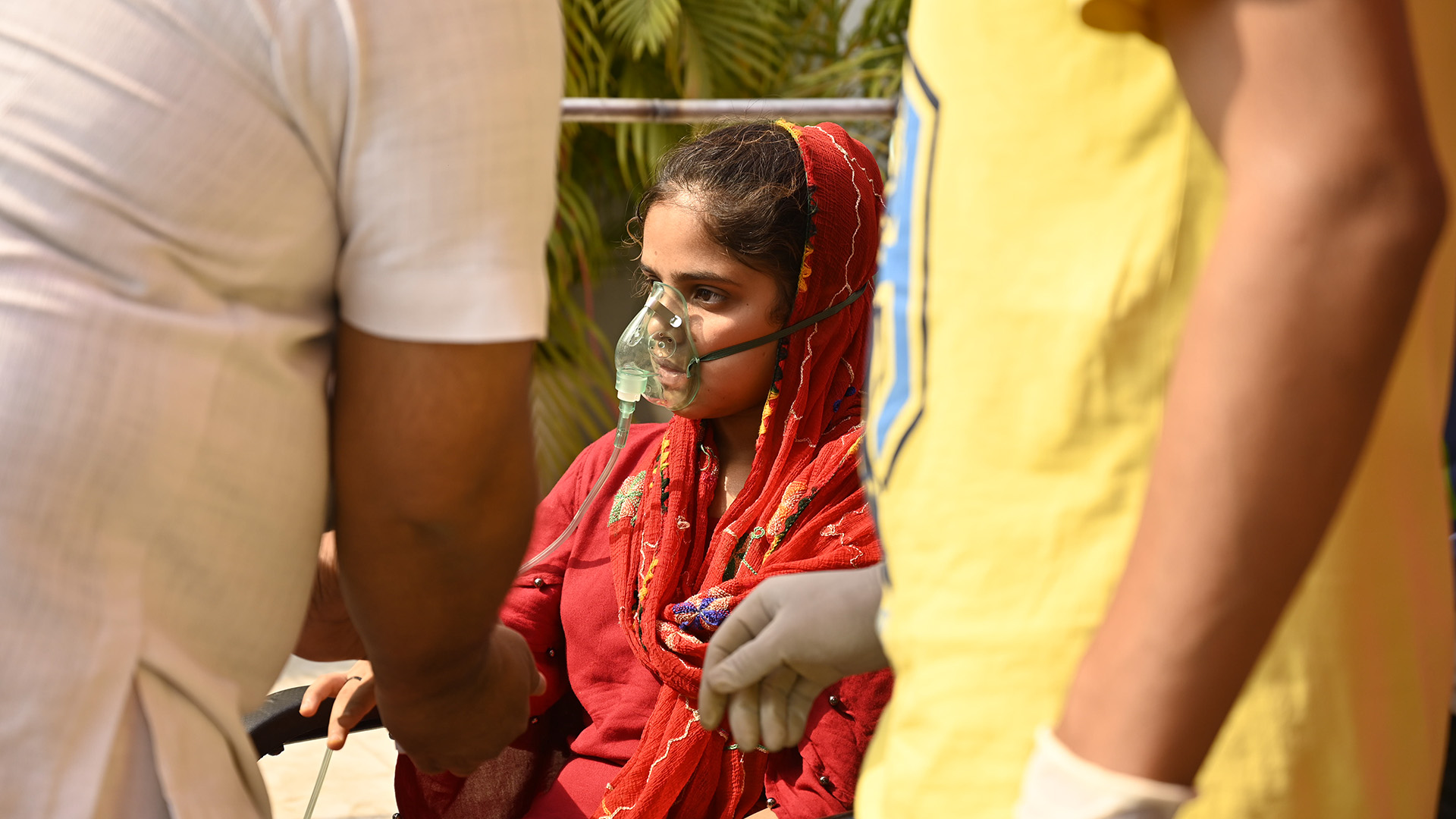 A lady with an oxygen mask at a facility providing oxygen in Indirapuram, Uttar Pradesh. (Anish Ganguli)

NEW DELHI — Swati had been searching for a hospital bed in or around India’s capital Delhi for three days, somehow managing to keep her husband, who was infected with Covid-19, breathing.

“After searching endlessly for three days, I got to know about a Sikh group providing free [medical] oxygen in Indirapuram [a satellite town near Delhi],” Swati told Zenger News.

“I was refused oxygen everywhere in Delhi and had to come here out of desperation.” Her husband got the oxygen, but the delay proved to be too costly as he died shortly after.

Many like Swati have been turning to ‘oxygen langars’ — a free-for-all oxygen supply and delivery system set up by Sikh human rights organizations such as Khalsa Help International and Hemkunt Foundation in India’s national capital.

People are dying in bulk as some hospitals have run out of oxygen supply.

The latest such incident happened in the southern state of Karnataka, where 24 patients, including some Covid-19 positive ones, died on May 3 at a district hospital in Chamarajanagar. District officials, however, denied all deaths were related to the oxygen crisis.

Hospitals have been unable to save their doctors. R.K. Himthani, the head of the gastroenterology unit at New Delhi’s Batra Hospital, died with 11 others due to a shortage of oxygen at the facility on May 1.

“This news is extremely saddening,” tweeted New Delhi’s Chief Minister Arvind Kejriwal. “His life could have been saved — by giving him oxygen on time. Delhi should be given its quota of oxygen. Delhi needs 976 tons of oxygen but was given only 312 tons. How will Delhi breathe in such short supply?”

In a television interview days after the incident, Batra Hospital’s medical director S.C.L. Gupta said: “To treat Covid-19, you need oxygen, drugs, and vaccination. Nothing is available. The government says there is a lot of oxygen, but patients are dying. I don’t know who is running this country.”

Another prominent hospital in Delhi, Sir Ganga Ram Hospital, reported 25 deaths due to a shortage of oxygen. The exact number of people lost their lives on April 24 at the capital’s Jaipur Golden Hospital for the same reason.

A hospital chain, Max Healthcare, had to tweet out an SOS on April 24 to secure some emergency oxygen. “Less than two hours’ oxygen supplies at Max Hospital Gurugram and attached dedicated Covid center. Over 70 Covid patients admitted across,” the tweet read.

The Delhi High Court has been holding regular hearings to take stock of the oxygen shortage.

“Water has gone above the head. You [Indian government] have to arrange everything now,” ordered the Delhi High Court on May 1. “You have made the allocations. You have to fulfill it.”

Citizens step in to breathe life

After few initial days of chaos, many citizens and humanitarian aid organizations have come together to help in their limited capacity.

“Even after medical bills worth hundreds of thousands, they [some hospitals] are not able to provide oxygen,” Gurpreet Singh, president, Sri Guru Singh Sabha Gurdwara and organizer of Khalsa Help International Oxygen Langar, told Zenger News.

“But at this gurdwara [a Sikh worship place] in Indirapuram, we are offering free ‘Oxygen Langar’ and have helped save 4,000 lives in about nine days.”

Gurpreet looks like a man on a mission. Aided with an N95 mask and gloves, he, with his team of young local volunteers, are working round the clock to help debilitated patients, some of who are driving there themselves.

“We have to save people,” he said. “We can’t wear PPE [personal protective equipment] kits four times a day [like doctors in big hospitals]. By the time we finish doing so, patients will die.”

“We don’t give medicines or treatment. We stabilize oxygen levels and refer patients to hospitals. After we give them oxygen, the patient gets five-seven hours to travel 200-300 kilometers (125-186 miles), even out of Delhi [in search of hospitals],” he said.

Hemkunt Foundation, a Gurugram-based humanitarian aid organization, has also stepped up to cater to those hunting for oxygen.

“This is a place we have established where till the time you find a bed or a hospital or any assistance, we can maintain your oxygen levels,” Ishaan Singh, project manager, Hemkunt Foundation, told Zenger News.

“But we are facing problems because we are getting a lot of patients whose SpO2 [oxygen saturation in blood] levels are 40, which is a horrible condition.”

“We have nothing but oxygen. No injections, no medicines. We are not doctors, and we are not authorized to do that,” Ishaan said, overlooking the temporary shelters lined with oxygen cylinders, cots, fans, and sanitizers.

Several netizens have also come together to use platforms such as Facebook and Instagram and messaging applications such as WhatsApp to aggregate information on contact lists of hospitals, oxygen suppliers, and plasma donors.

“We have social media groups where we get forwards of contacts,” Nabeel Khalid Siddiqui, a Pune-based customer management executive, told Zenger News. “We then verify each one of them.”

Nabeel, and his group of friends from New Delhi’s Jamia Millia Islamia University, work in shifts to verify leads and provide contacts. However, he says the conversion rates of these leads are less as they get exhausted quickly due to the high demand.

The New Zealand High Commission in New Delhi landed in a controversy when they asked the youth wing of the Indian National Congress, India’s principal Opposition, to provide them with oxygen cylinders.

They tweeted their request but later deleted it. “We are trying all sources to arrange for oxygen cylinders urgently, and our appeal has unfortunately been misinterpreted, for which we are sorry,” they said in a follow-up tweet.

However, the youth wing delivered the cylinders to the High Commission, which they accepted.

There were reports of the Philippines Embassy seeking and getting oxygen cylinders, too.

This invited sharp criticism from the ministry of external affairs.

“Giving away cylinders like this when there are people in desperate need of oxygen is simply appalling,” he said.

Given the pandemic situation, all are urged not to hoard essential supplies, including oxygen, the ministry later asked all embassies.

The government has been criticized for its delayed and muted response to the crisis, whether for providing vaccines, supplying adequate oxygen, providing ICU beds, or managing the dead.

Various state high courts and the Supreme Court of India have asked the federal and state governments to explain the dire circumstances.

“Centre shall ensure that the deficit in the supply of oxygen to the government of the National Capital Territory of Delhi is rectified before the midnight of May 3,” the Supreme Court said.

It increased the availability by 3,300 million tons per day with contributions from private and public steel plants, industries, and oxygen manufacturers. It prohibited oxygen supply for non-essential industries.

Countries like the U.S., France, Saudi Arabia, and New Zealand have promised aid to India. The Indian Air Force has airlifted oxygen containers from Singapore, France, and even China. The government has also given the army emergency financial powers to set up quarantine facilities.

But the help is too little, too late. “This government is useless,” said a bereaving Anuj Kumar, who recently lost his nephew. His wife was battling for her life at the Indirapuram Oxygen Langar.

“So many people are dying every day. We are back to square one. The disease has spread so much. Bodies are piling up. Two crematoriums refused to let us cremate my nephew.”

Kumar believes a lockdown in the current scenario will mean more deaths.