US Boosts Philippines Fight Against IEDs 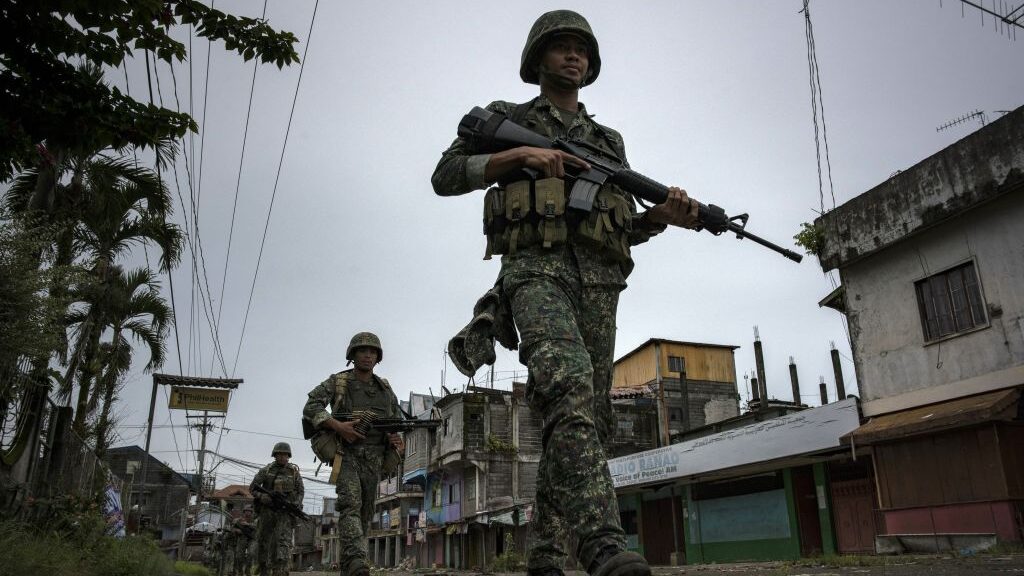 Across the Philippines, scores of improvised explosive devices (IEDs) sit silently, waiting to kill, as communist and jihadist insurgents use large numbers of these crude weapons to harm Philippine soldiers and civilians.

In recent months, the United States has launched initiatives to help its former colony and oldest Asian ally increase its defense capabilities in the interest of border security and counter-terrorism efforts. The Philippines remains the largest recipient of U.S. defense aid in Asia despite tensions in recent years centered on allegations of human-rights violations by the regime of President Rodrigo Duterte.

When U.S. Secretary of Defense Lloyd J. Austin III spoke earlier this year with Philippines Secretary of National Defense Delfin Lorenzana, he “proposed several measures to deepen defense cooperation between the United States and the Philippines” a readout of the call says.

The two leaders also affirmed the value of the U.S.-Philippines Visiting Forces Agreement.

The call appeared to quash a rift between Washington and Manila over the treaty.  Duterte earlier this year demanded more military aid from the U.S. in exchange for keeping the pact intact.

“The modernization of the AFP [Armed Forces of the Philippines] will ultimately allow us to respond more effectively to both traditional and nontraditional security threats to our maritime nation,” Lorenzana said in December as a new program to transfer defense equipment to the Philippines was announced.

The Philippine government received $29 million worth of defense gear, including sniper rifles and anti-IED equipment from the United States during a visit from a senior U.S. defense official in December.

“Considering [that] the Philippines have limited resources for the modernization projects, transfer/grant of this kind of equipment is of great support to the country in combating IED threats,” the Philippines’ Department of Defense said in a press-statement to Zenger News.

“Moreover, this will pave the way to a more efficient, effective and economical way of responding to any explosive threats. Its impact to the Philippines means strong bilateral cooperation and readiness in combined operations in the future in terms of new and improved capabilities brought by these transfer/grant to the Philippines.”

The transferred material is destined for units in both the Philippine Army and Philippine Marine Corps. For both forces, improvised explosive devices remain a serious threat. The Philippine military announced in April that it had recovered some 48 IEDs built by the Maoist-inspired New Peoples’ Army in recent months. In the past year, the Philippine military has discovered two IED factories used by rebels, including the discovery in April of one such facility in a tunnel near Ormoc City.

“The equipment will be utilized by explosive ordnance disposal teams deployed in different Marine Brigades particularly in the Southern part of the country and in Palawan area thus, it will enhance the capability of the EOD teams in guarding the borders by preventing unauthorized explosives to penetrate the Philippine soil,” said the Philippines Department of Defense.

Crude landmines are often the weapon of choice for such insurgents and pose a threat to more than just Filipino soldiers. Two civilians, including a child, were injured in April when they accidentally triggered an explosive device that had been targeted at soldiers.

“The program has focused on items like small arms and PPE, which is part of the overall counter-terrorism capability enablement which [was] underway even before the Battle of Marawi,” said Philippines defense analyst Armando Heredia.

The 2017 Battle of Marawi was the longest sustained urban battle in Southeast Asia since the Tet Offensive in 1968. The 1st Special Forces Group, U.S. Navy SEALs and U.S. Navy SWCC provided assistance to Filipino forces during the five-month struggle against ISIL terrorists who seized the city.

The fighting cost some 1,000 lives, including about 100 civilians. With over 1.1 million people displaced due the siege of the city, many were eager to return home, but the defeated insurgents left behind a destroyed city littered with improvised explosive devices. Some 53 known devices were had still not been disarmed as late as April 2018, according to local media, and demolitions experts had to sweep the city.

“Indeed, the donation of anti-IEDs and sniper equipment from the United States is certainly needed to ensure the border is well protected against new threats like smuggling and encroachment from China as well as the continued threat communist insurgents and radical extremists,” said Joshua Espeña, a research fellow with the International Development and Security Cooperation, a think-tank in the Philippines.

The transfer comes on the heels of other recent U.S. defense transfers to the Philippines, including some $18 million worth of precision-guided munitions.  In February, the Philippines received two C-130H Hercules aircraft under a transfer scheme from the U.S. military. Government plans to acquire five of the transport aircraft have been scaled back due to COVID-19 related budget constraints.

Despite protests from some in the Democratic Party and others in Washington over human rights concerns in the Philippines, the Biden administration clarified in February that there are no restrictions on potential U.S. defense transfers to the Philippines.