Russia's government is trying to silence its critics, but "the Kremlin has problems it hasn't been able to solve in years."
By Troy Albert Schulz May 4, 2021
Facebook
Twitter
Linkedin
Email 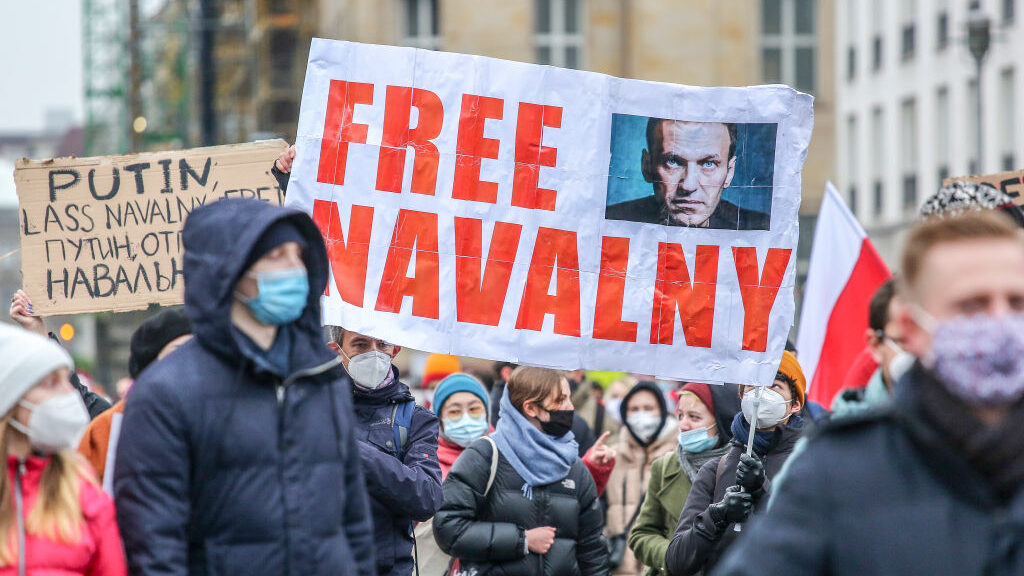 About 2,500 supporters of Russian opposition politician Alexei Navalny march in Berlin to protest to demand his release from prison in Moscow on January 23. (Omer Messinger/Getty Images)

The opposition in Russia has been the target of a widespread crackdown by authorities in the wake of the high-profile sentencing of dissident Alexey Navalny in February.

Navalny, who barely escaped an assassination attempt in August 2020, when he was poisoned with a Novichok nerve agent, spent five months in hospital in Germany. He was arrested on Jan. 17, 2021, after returning to Russia following his recovery, and placed on house arrest. On Feb. 2, he was sentenced to three-and-a-half years in a penal colony for violating terms of his probation.

Navalny made a public appearance in an April 29 court hearing via teleconference, shortly after completing a 24-day hunger strike.

Despite his gaunt appearance, he remained defiant, calling Vladimir Putin a “naked king” and accused prosecutors of being “traitors implementing a plan to seize Russia.”

His Anti-Corruption Foundation (FBK), which investigates and exposes corruption among Russian government officials, was designated an “extremist” group by Russian authorities in April. It falls under the collective term “non-systemic opposition.”

The “extremist” designation of the FBK came as part of a larger crackdown on groups and individuals opposed to Putin’s regime and the ruling United Russia party ahead of legislative elections on or before Sept. 19. Those targeted include the Russian-based independent news website Meduza, published out of Latvia since 2014. In April, Russia declared Meduza to be a “foreign agent.”

Across Russia, more than 1,700 protesters demanding Navlny’s released were arrested in mid-April, according to media reports.

“United Russia is less popular than it’s ever been, which is why they’re resorting to so much more blatant electoral manipulation,” said Frye.

The FBK, which has produced a series of videos and documentaries exposing alleged corruption, in late April was ordered by the Moscow prosecutor’s office to suspend activities.

A court began hearings into designating the organization as “extremist.”

Such a ruling, under criminal liability, would prevent the FBK from posting materials online, holding rallies, accessing bank accounts and participating in the electoral process.

The Federal Service for Financial Monitoring in Russia added Navalny’s campaign offices to a list of suspected extremist and terrorist groups.

“[Navalny] did what no other opposition in the country has done, in creating a series of regional offices across the country that helped opposition parties coordinate for the upcoming election,” said Frye. “For a long time, the regime thought it was best to keep [Navalny] out on the fringes, but that’s failed, so they’ve cracked down hard on him.”

Leonid Volkov, Navalny’s chief of staff, announced on YouTube on April 29 that the FBK network “in its current form” would be suspending operations, but that individual offices would continue to operate as independent entities.

“Navalny is a singular person in the opposition movement, there’s no one else quite like him,” said Frye. “But destroying him won’t solve the problems that created him or his movement.”

The largest opposition parties in the legislature are the far-left Communist Party and the far-right Liberal Democratic Party.

“There’s are constraints on how much [Putin] can manipulate an election in his favor without seeming like outright theft and sparking a backlash, like in 2011,” said Frye.

“The more they manipulate, the weaker they look.”

During the so-called 2011-2013 Snow Revolution of which Navalny was a part, there were widespread protests targeting Putin and United Russia, alleging corruption in an electoral process meant to consolidate the president’s power.

“The fundamental problem is the Kremlin has problems it hasn’t been able to solve in years, and more and more, that’s becoming difficult to control,” said Frye.

The FBK did not respond to requests for comment.