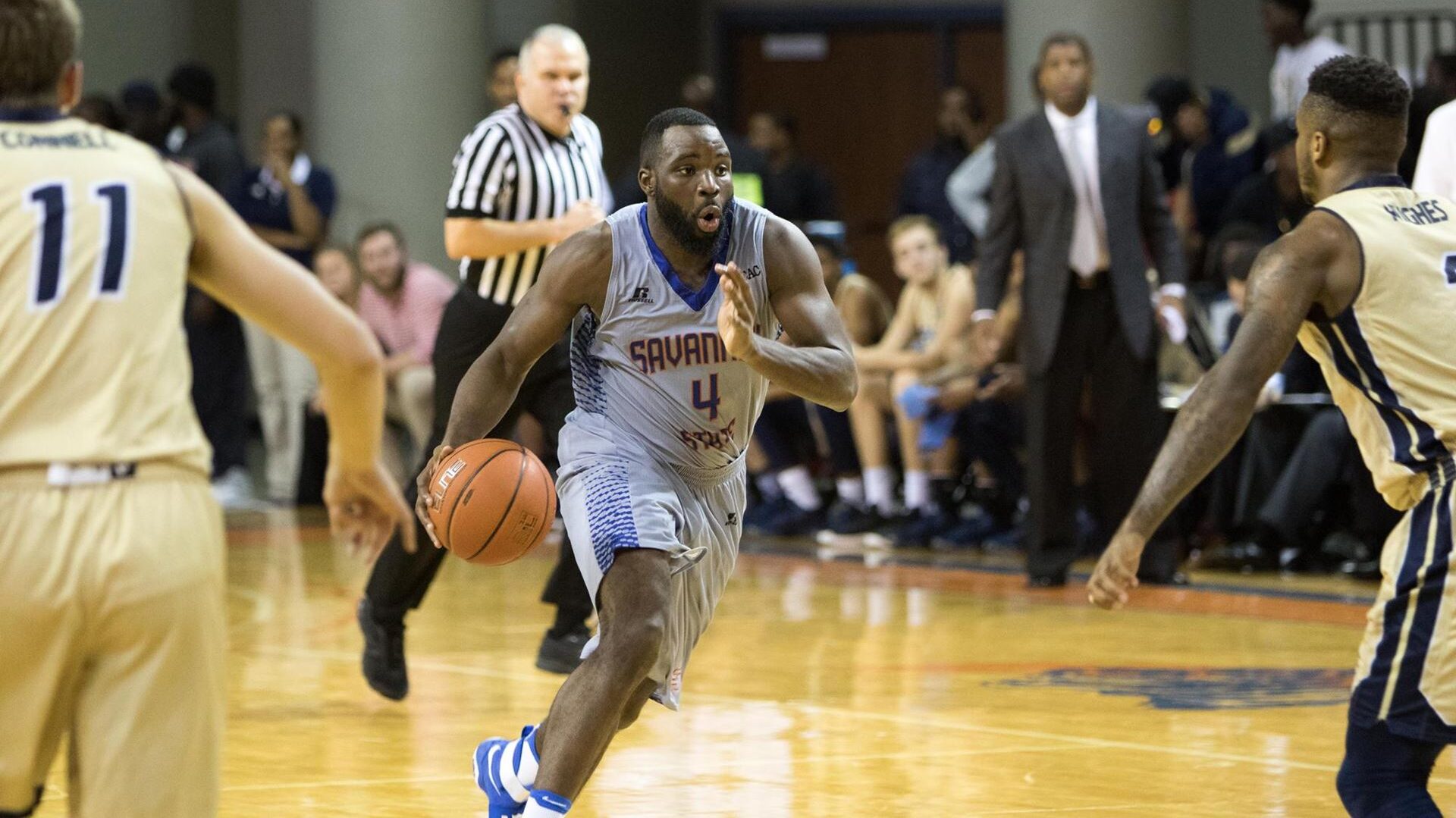 Troyce Manassa and two other athletes from historically black colleges and universities, or HBCUs, are suing the NCAA. (ssuathletics.com)

Troyce Manassa was a highly recruited basketball prospect during his junior college days, but he wanted and got the HBCU experience. However, his dream turned into a nightmare after playing under probation and missing the postseason for what he believes are racially biased NCAA rules infractions that he alleges were misrepresented by Savannah State University, the school he enrolled in several years back.

Manassa, his teammate Austin Dasent, and Howard University women’s lacrosse player J’Ta Freeman are suing the NCAA in federal court and trying to level the playing field for student-athletes at historically black colleges and universities, or HBCUs, whose resources don’t allow them to properly staff positions that oversee the academic progress rate [APR]. That has derailed the dreams of many student athletes who were placed in the awkward circumstance of choosing between transferring or remaining loyal to the school that was first to heavily recruit and make a scholarship offer to them a chance to play Division I sports.

“The depth of this discrimination that HBCU student athletes have encountered is so unbelievable,” said Washington D.C.- based attorney LaRuby May, of May, Lightfoot, LLC, one of the lead attorneys arguing the case. “When many of the freshmen didn’t have the same amount of practice time as they did when they were in high school they just accepted it as that just how it is. They didn’t realize it was that they were on probation for things that happened years before they got there.”

The APR rule states that institutions are accountable for the academic progress of their student-athletes through a team-based metric that accounts for the eligibility and retention of each student-athlete for each academic term.

Through a complex formula teams must score 930 points in order to avoid probation. The NCAA claims the APR is supposed to provide incentives for academic achievement by student-athletes.

However, the lawsuit said the organization has also acknowledged that historically black colleges are at a significant disadvantage. The guidelines for compliance place a burden on understaffed programs to comply with rules that force these already financially strapped to maintain the benchmarks for eligibility.

Penalties include reductions to athletically related activities such as reduced practice time and playing seasons without the opportunity to compete for championships. Currently, 12 of the 15 teams serving APR probation who won’t compete during the postseason during the 2020–2021  academic year are historically black colleges.  These sanctions are based on APR rates for student athletes who were enrolled between 2015–16 and 2018–19.

Bans on postseason cost athletic departments a chance to subsidize themselves by losing money from conference championship or NCAA Tournament games, which in many cases are nationally televised.

In his lawsuit Manassa and the other plaintiffs allege that APR rules discriminate against African American student athletes because “an HBCU team is 43 times more likely to receive a postseason ban” than their PWI (predominately white institution) counterparts. It also states that 72 percent of the schools who earned academic probation since 2010 are historically black colleges. The argument is the NCAA is representing a pattern or practice of “intentional racism towards athletes at HBCUs on the basis of race.”

Attempts to reach representatives from both the NCAA and Savannah State for this story were unsuccessful.

“We haven’t heard a lot from the organization,” said Je Yon Jung, the other counsel representing the plaintiffs in this case. “In 2020 people thought discrimination only happens with racial slurs, bad hearts and malicious intent but that’s not the case. Systemic racism happens through generations and decades like we are today, where you still have these systems in place that have just repeated themselves.”

However, the lawsuit contends that well-documented research proves a pattern of inherent bias against historically black colleges.  Over the last decade, the NCAA has acknowledged how the flaws in their system have worked to penalize HBCU athletic programs. In 2011, NCAA President Mark Emmert told insidehighered.com:  “We want to help [HBCUs] develop plans for improvement… we have a special obligation to work with HBCUs.”

“[HBCUs] don’t have the resources that bigger schools have to travel with academic advisors on the road like major colleges do,” Manassa said. “Sometimes an 18–19 year old kid needs someone to push him and keep him focused. Larger programs have advisors dedicated to one team where at HBCUs you’ve got an advisor handling three or four sports.”

As a player Manassa couldn’t have done more for a team that was ineligible for the reward of postseason competition.  He was a second team all-MEAC performer who averaged 16.9 points per game in his first season after transferring from Wallace Community College following the 2016–2017 season. Manassa was also projected as a player of the year candidate in 2017–2018.  However, when the NCAA’s tilted hand of justice went against the Savannah St. basketball program Manassa fell off the scale and dramatically altered his life’s plan that adversely impacted his mental health.

“It was tough being put in the position to make a choice between a school with more exposure and resources and the school who was the first to recruit you and offer you a scholarship,” Manassa said. “I’m a loyal person, but when you’re playing in a season where there’s nothing to play for it’s tough. You try not to let it bother you, but it does affect the morale of the team.”

After arriving at Savannah with grand dreams of playing the NBA, Manassa is currently working on getting his master’s degree in business. He did play as a basketball pro in leagues in Mongolia and Australia before hanging his sneakers up in 2018.

The lawsuit is still in its discovery phase and will not be heard by the U.S. District Court in Southern Indiana before 2022, due to a backlog of cases caused by the COVID-19 pandemic.