India hasn't responded to the offers officially, but some help from China has been flowing in.
By Umair Jamal May 4, 2021
Facebook
Twitter
Linkedin
Email 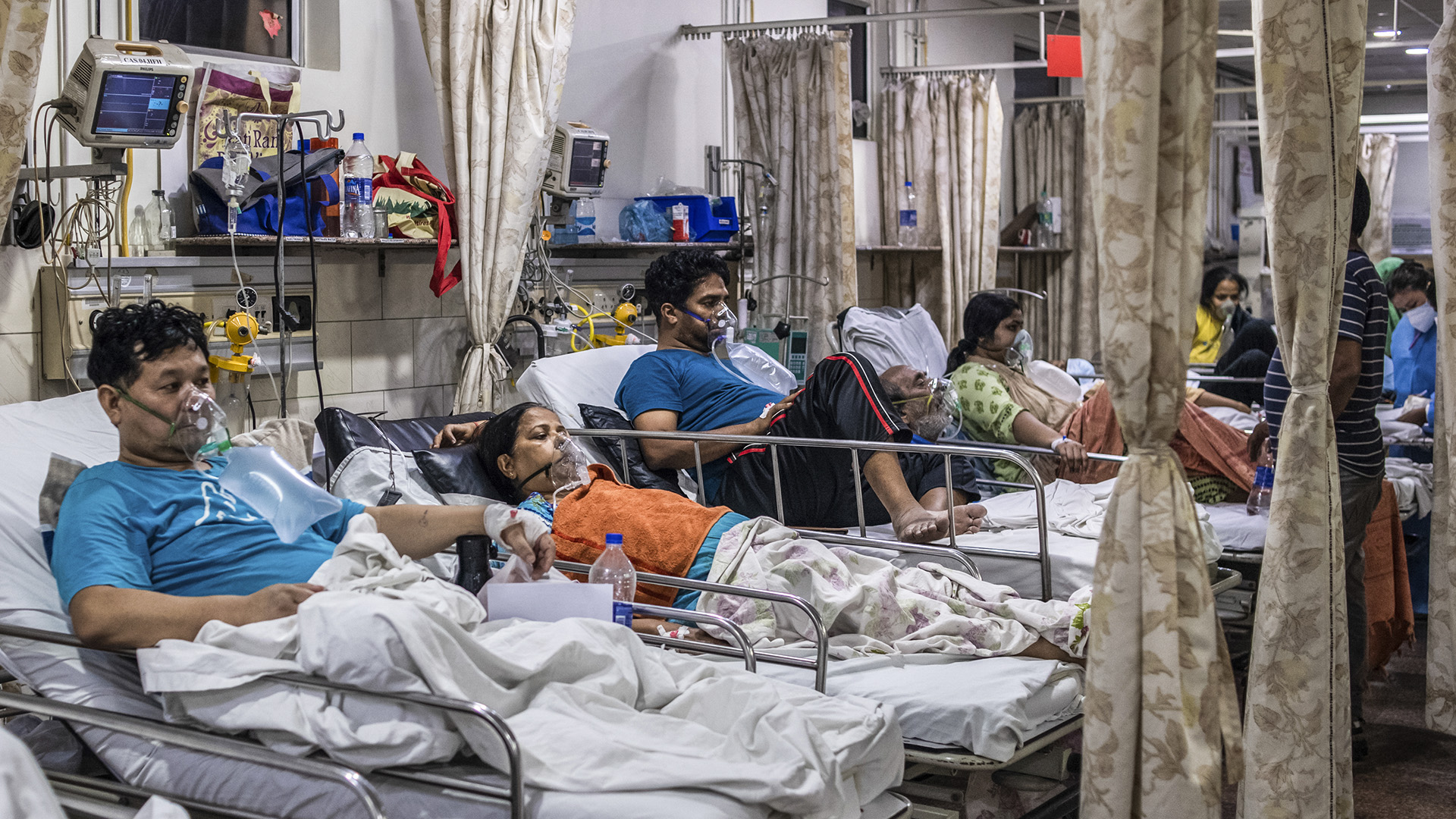 Patients who contracted the coronavirus lie in beds while connected to oxygen supplies inside the emergency ward of a Covid-19 hospital New Delhi, India. (Rebecca Conway/Getty Images)

LAHORE, Pakistan — India’s rival neighbors Pakistan and China have offered help to the South Asian nation in tackling the raging second wave of Covid-19. India is yet to respond.

The cooperation comes even as a U.S.-based think tank has projected a war between India and Pakistan in the next five years.

“India and Pakistan may stumble into a large-scale war neither side wants,” states the report, titled “Global Trends 2040”, published by the U.S. National Intelligence Council in April.

India is going through one of the worst coronavirus situations globally. The country has been reporting over 350,000 daily cases for the past week. Cases topped 400,000 on April 30.

India’s hospital system is on the verge of collapse. Shortages of oxygen, intensive care beds, and other medical support have been reported.

“I want to express our solidarity with the people of India as they battle a dangerous wave of Covid-19,” tweeted Pakistan’s Prime Minister Imran Khan.

“Prayers for a speedy recovery go to all those suffering from the pandemic in our neighborhood. We must fight this global challenge confronting humanity together.”

“As a gesture of solidarity with the people of India, Pakistan has offered to provide relief support to India,” notes the statement. It states the authorities concerned could work out modalities “for quick delivery of the relief items”.

China, in a border conflict with India, also pledged its support.

“China is ready to provide support and help according to India’s needs and is in communication with the Indian side.”

“People should see Pakistan’s offer to send medical hardware to India in the context of the slow improvement in the bilateral relations,” Claude Rakisits, a professor of international relations at the Australian National University, Canberra, told Zenger News.

“Imran Khan is doing this not only because he cares about Indian lives.”

“He also wants to send a message to [Indian] Prime Minister Narendra Modi that this emergency is an opportunity for the nations to reset their relationship on a more productive footing.”

However, some analysts opine that India is not likely to accept any material support from Pakistan.

“Narendra Modi would not want to be seen as a weak leader. One that while not being able to manage this crisis, relies on its principal foe.”

Rakisits also believes it will be “challenging” for Modi to accept help from Khan.

Analysts have similar views about India’s assessment of China’s offer.

“Most of the world, including India, holds China responsible for the pandemic,” Joy Mitra, a non-resident fellow at the EastWest Institute in Washington D.C., told Zenger News.

“Beijing is virtually sitting on the Indian territory [in the northern Sikkim border region], making it very difficult for New Delhi to accept Beijing’s offer.”

“India and China have been engaged in a vaccine diplomacy competition. Both have shipped homemade vaccines globally,” Mitra said. “It would be bad optics for Modi to accept China’s offer in such a case.”

Nonetheless, India seems to have initiated cooperation with China in some capacity, though not through official channels.

“Chinese medical suppliers are working overtime on orders from India,” China’s Ambassador to India Sun Weidong tweeted on April 28. This indicates that many organizations are using private channels to extend help to India.

“At least 25,000 orders for oxygen concentrators in recent days. Cargo planes are under the plan for medical supplies. Chinese customs will facilitate relevant processes.”

“800 oxygen concentrators have been airlifted from Hong Kong to New Delhi; 1,000 more in a week. China is keeping in touch with India for urgent needs,” China’s embassy in Sri Lanka tweeted.

U.S. steps in after an initial delay

The U.S. recently invoked the Defense Production Act to boost local vaccine production and limit the export of raw materials to other countries. U.S. State Department spokesperson Ned Price also said Washington had a “special responsibility to the American people”.

But President Joseph R. Biden has pledged emergency assistance after a conversation with Modi. A White House statement released on April 26 stated that the U.S. “is [now] providing a range of emergency assistance, including oxygen-related supplies, vaccine materials, and therapeutics”.

So far, more than 20 countries have offered to help India in different capacities.

“Many nations are sending material support to India now. Domestic capacity and logistics are also being supplemented,” Mitra said.

“I don’t think India would directly take China’s offer right now. Not unless other sources do not address the gap between demand and supply.”