One in 20 actors in American movies is Hispanic and help drive ticket sales and streaming services. 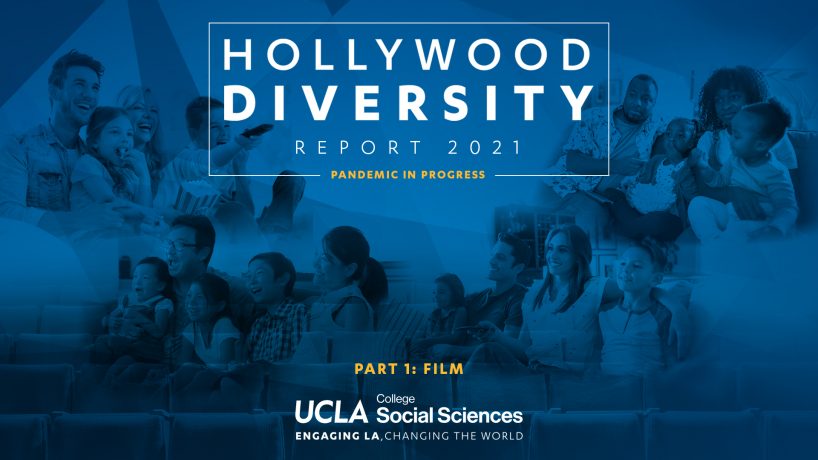 The “Hollywood Diversity Report” prepared by UCLA offers a ten-year analysis of the film industry. (UCLA)

Latinos made considerable gains in films last year, but remain significantly underrepresented in the industry, according to a new study. UCLA’s “Hollywood Diversity Report 2021” indicates a growing interest in films with diverse casts.

It also confirms Latinos continue to be a significant driver of movie ticket sales and streaming services subscriptions.

In studying the top 200 films released theatrically and online in the U.S. and Canada, the report found people of color and women made substantial progress in four key job categories: lead actors, total cast, writers and director. There are more Latinos in all categories than in the previous two years, but their numbers are still disproportionately low.

Latinos are the nation’s largest minority group, according to the U.S. Census. But their numbers are dismal in the report’s four key film employment categories. Latinos accounted for only 5.4 percent of all actors leading a feature and 5.7 percent of all movie roles. That means that while nearly four out of every 20 Americans are Hispanic, there is only one Latino out of every 20 protagonists in films. Just one of every 20 actors in movies is Latino.

The case is worse in other categories.

Latinos are just 3.2 percent of all writers and even less of all directors: only 2.7 percent. Still, those numbers represent a notable improvement from just two years earlier, when Latinos accounted for just 0.7 percent of both writers and directors.

Yet, Hispanics are potent consumers of films. As in previous years, minorities were critical drivers of movie theater ticket sales and streaming subscriptions, notes the UCLA study.

On opening weekends, people of color made up most domestic ticket purchases for six of the top 10 theatrical releases last year. And Latinos stand out among those going to the movies.

“It’s worth noting that Latinx persons, about 19 percent of the U.S/Canada population, were significantly overrepresented among moviegoers in 2020, accounting for 29 percent of the tickets sold,” states the report. Six racial and ethnic groups are included in the survey: Asian, Black, Latinos, Middle Eastern, North African, White and multiracial.

Latinos also watch films on the internet in significant numbers. “Latinx and Black adults were both overrepresented among online content subscribers and electronic sell-through/video-on-demand, daily viewers,” the report says.

In the pandemic and five years after the hashtag #OscarSoWhite challenged Hollywood, films with diversity have proved popular among audiences in general and minorities in particular.

Eight of the top 10 theatrical releases featured casts that were greater than 30 percent minority. The top 10 films were “Bad Boys for Life,” Tenet, “Sonic the Hedgehog,” “Doolittle,” “Birds of Prey,” “The Invisible Man,” “Onward,” “Wonder Woman 1984,” “The Croods: A New Age” and “The Call of the Wild.”

“We’ve been systematically looking at these key job categories and comparing the representation of women and people of color to the all-important bottom line for eight years. It’s encouraging to see skyrocketing numbers this year in front of the camera,” said Darnell Hunt, dean of the UCLA College division of social sciences and the report’s co-author.

“This was a very interesting year to track the nimbleness of industry efforts to deliver content to audiences, who grow increasingly racially diverse each year, and who, it’s clear, were eager to enjoy films in new ways, despite disruptions caused by the pandemic.”

TV industry data, part two of the now-biannual report, will be released in September 2021.

UCLA’s “Hollywood Diversity Report” incorporates analysis of how top films perform among different racial groups, comparing the diversity of casts, directors and writers with the diversity of American audiences.