The concept has made inroads over the past five to ten years mainly in Sindh. 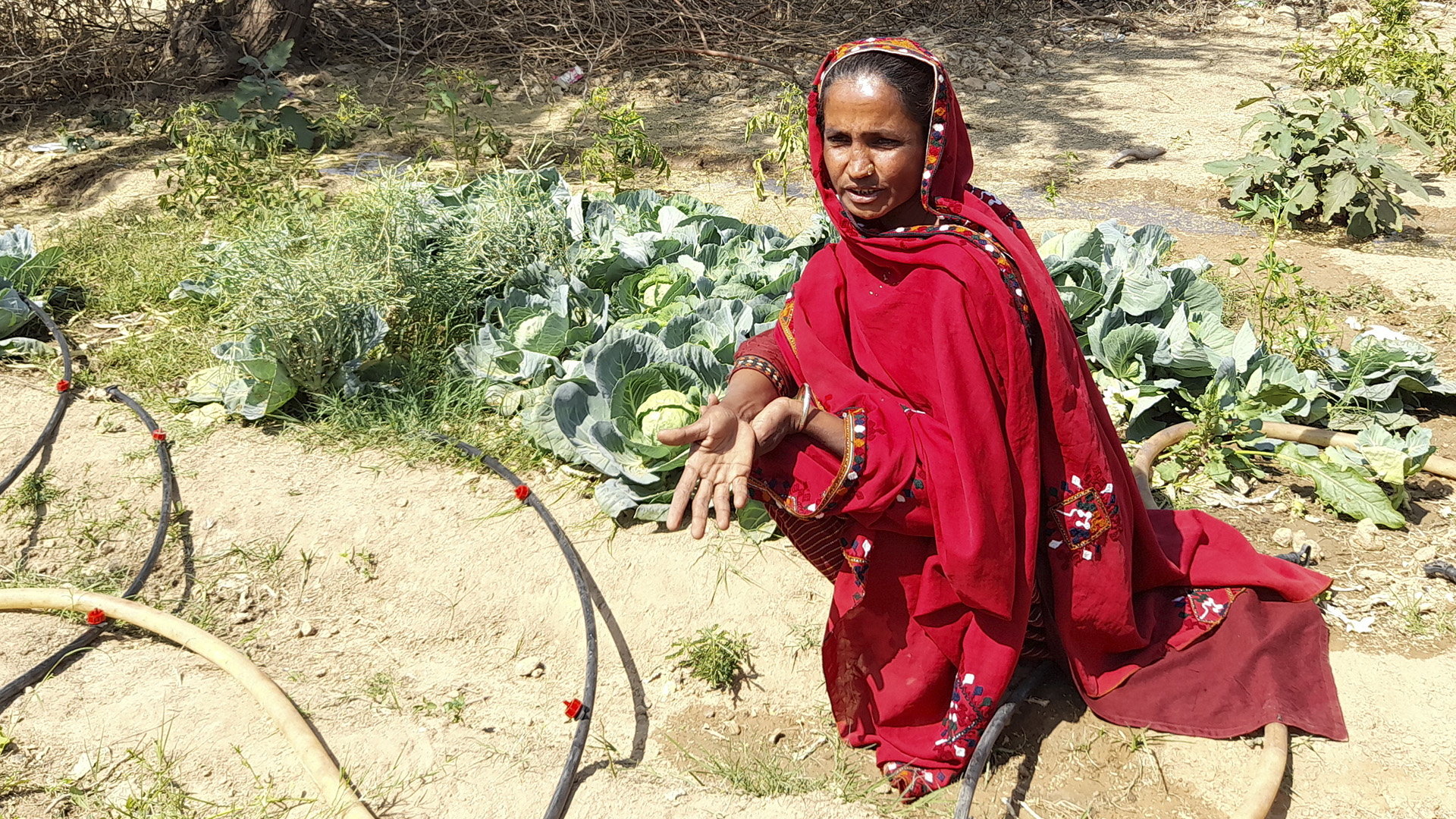 Zulekha Tunio, a mother of five children in her mid-30s, shows her kitchen garden and the drip irrigation method she uses. (Asifa Idrees)

KARACHI, Pakistan — “My five children often slept hungry when my husband did not get work,” Khadija Bibi, a 37-year-old from Thatta in Sindh province of Pakistan, told Zenger News.

“He is a mason helper and earns PKR 7,000 ($45.35) a month when he is lucky to get work,” she said while working a small kitchen garden. “Not everyone gets lucky. Unemployment is high. The city is far. At times, he didn’t have the money to buy a bus ticket to go there in search of work.”

“A gradual increase in prices of daily food items made things worse. Shopkeepers stopped selling us vegetables on credit. We went through horrible times.

“Long spells of my husband’s unemployment forced me to look for options to earn to keep my family going. But all I knew was toiling on fields.”

She recalls a meeting with a non-governmental organization team, visiting her far-flung village three years ago, was her life’s “turning point”. 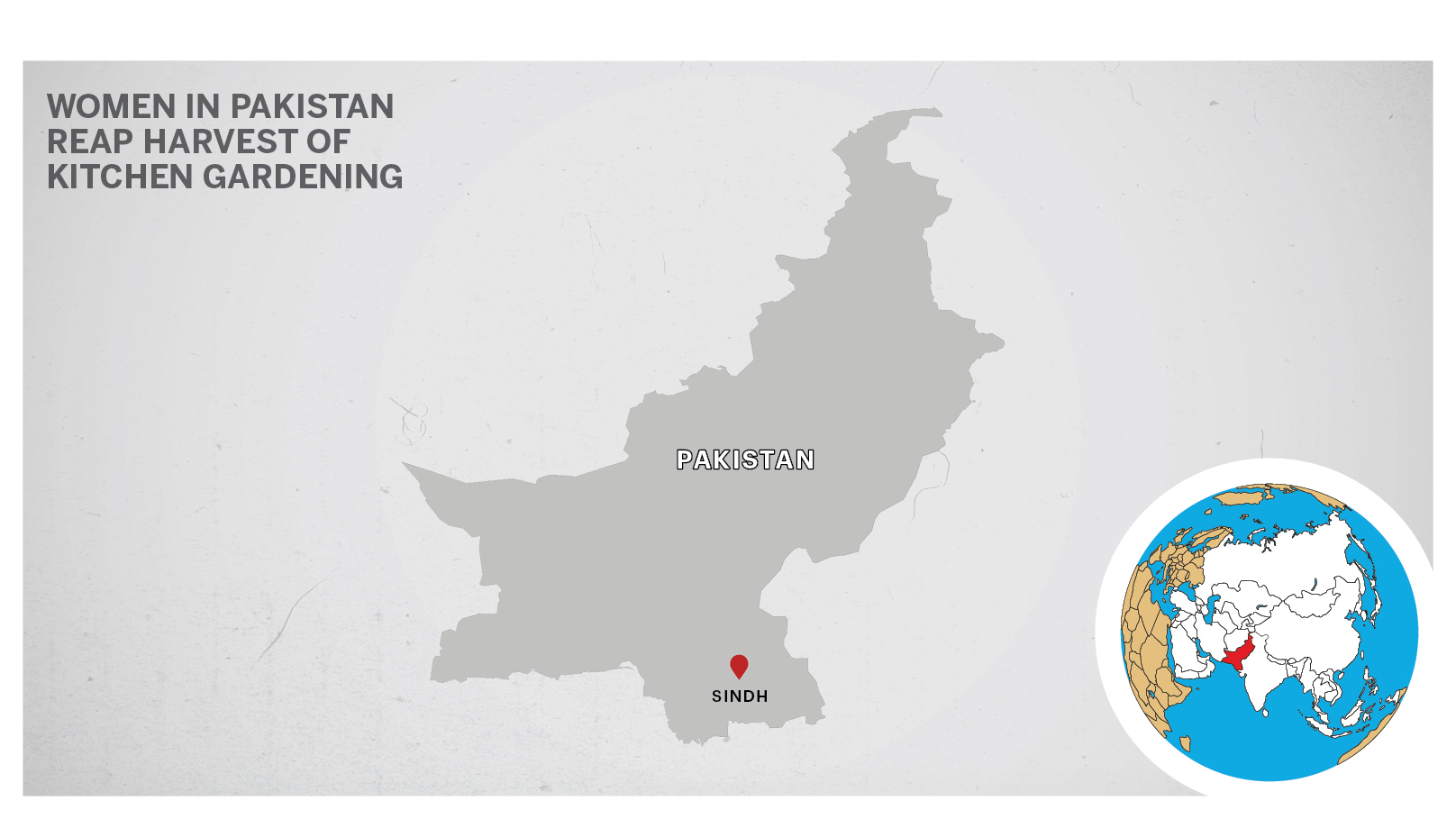 “I attended the kitchen garden training sessions organized by Programme for Improved Nutrition in Sindh. They provided us with seeds and basic tools for free for two years. Now, we not only grow vegetables enough for our family but also sell them. We also give them to neighbors who cannot pay,” she said.

The Program for Improved Nutrition in Sindh is supported by the European Union and contributes to the provincial government’s ongoing project to reduce stunting and malnutrition.

She has turned half a portion of the courtyard of her small house into a kitchen garden.

“I never thought growing own food would be this simple,” Bibi said, with a smile on her face. She says a friend, who had trained from a farmer field school, had advised her to meet the non-governmental organization team three years ago.

Bibi is one of the thousands across Pakistan to reap kitchen gardening advantages, including cheap food and financial gains.

Soaring prices of food items and shrinking agricultural areas have forced people to spend extra on food. An average Pakistani household spends 50.8 percent of monthly income on food, according to the UN’s World Food Program. It also says that 36.9 percent of the population faces food insecurity.

The cost of food in Pakistan increased 6.70 percent in January 2021 over the same month in the previous year. Small kisans (farmers) have been selling fertile lands to developers as rising input prices and low subsidies make agriculture unprofitable.

“We analyzed data from 335 farming households from the second-largest agricultural producing province in the country, Sindh,” a research paper published by Switzerland’s Multidisciplinary Digital Publishing Institute in 2020 states. “Our findings show that more than 19 percent of households have completely shifted from farming to off-farm activities.”

Kitchen gardening has emerged as affordable parallel support to the food supply chain for the less fortunate. It has particularly attracted women from rural areas. Many are growing vegetables and fruits in home courtyards, lawns, and even rooftops for domestic use.

The concept has made inroads over five to ten years, mainly in Sindh, northeastern Punjab, and northwestern Khyber Pakhtunkhwa provinces.

Shaukat Ali Chadhar, president of non-governmental agricultural research organization Kisan Board of Pakistan, told Zenger News that over 10 million — or nearly 5 percent of the country’s population — are involved in kitchen gardening.

“Most of the fertile land sold by farmers to developers was located near cities,” he said. Chadhar illustrates this by taking Punjab as an example.

Sixty-five percent of Pakistan’s food requirement comes from the province. “In 10 years, almost 30 percent of Punjab’s cultivable land has been taken over for housing and industrial needs,” he said.

But Chadhar does not think kitchen gardening has become a trend yet.

“It’s a wonderful alternative to meet daily food requirements and earn extra. This has attracted many in recent years,” he said. “However, this is not being done systematically or with patronization of the government and the private sector.”

“The Shehbaz Sharif government gave seeds to women in rural areas of the province for one year,” Chadhar said. Sharif was Punjab’s three-time chief minister. “However, the incumbent governments did not pursue the idea.”

Kisan Board of Pakistan runs pilot projects in rural areas and small cities to popularize kitchen gardening, according to Chadhar. State-run Pakistan Agriculture and Research Council has also published a magazine on kitchen gardening to help the people.

Almost 37 percent of households in Pakistan lack access to adequate food because of limited resources, according to an Economist Intelligence Unit report.

As a result, malnutrition is commonplace. About half of adult women in Pakistan suffer from anemia, over a third of children are stunted, and about 30 percent of under five years of age are underweight, according to the report.

Under the Program for Improved Nutrition in Sindh, people are being asked to adopt “climate-resilient small-scale kitchen gardening and integrated community farming” to increase incomes.

“More than 7,800 households cultivated their own kitchen gardens, diversifying diets to the people in need.”

Zulekha Tunio, one of the beneficiaries of the farmer field schools, has her own story to share.

“I was growing vegetables for years in an unorganized way,” Tunio, a mother of five in her mid-30s, said. She cultivates a small piece of land adjacent to her one-room house in Bhambore. Her husband is a daily wage laborer.

“The training helped me do this in an organized way. Now, I can prepare compost with the help of vegetable waste and cow dung for my kitchen garden. I don’t depend on anyone for food.”