Predictions say India with its overall tally of only 28 medals could bag 17 this year. But Covid remains a major hurdle. 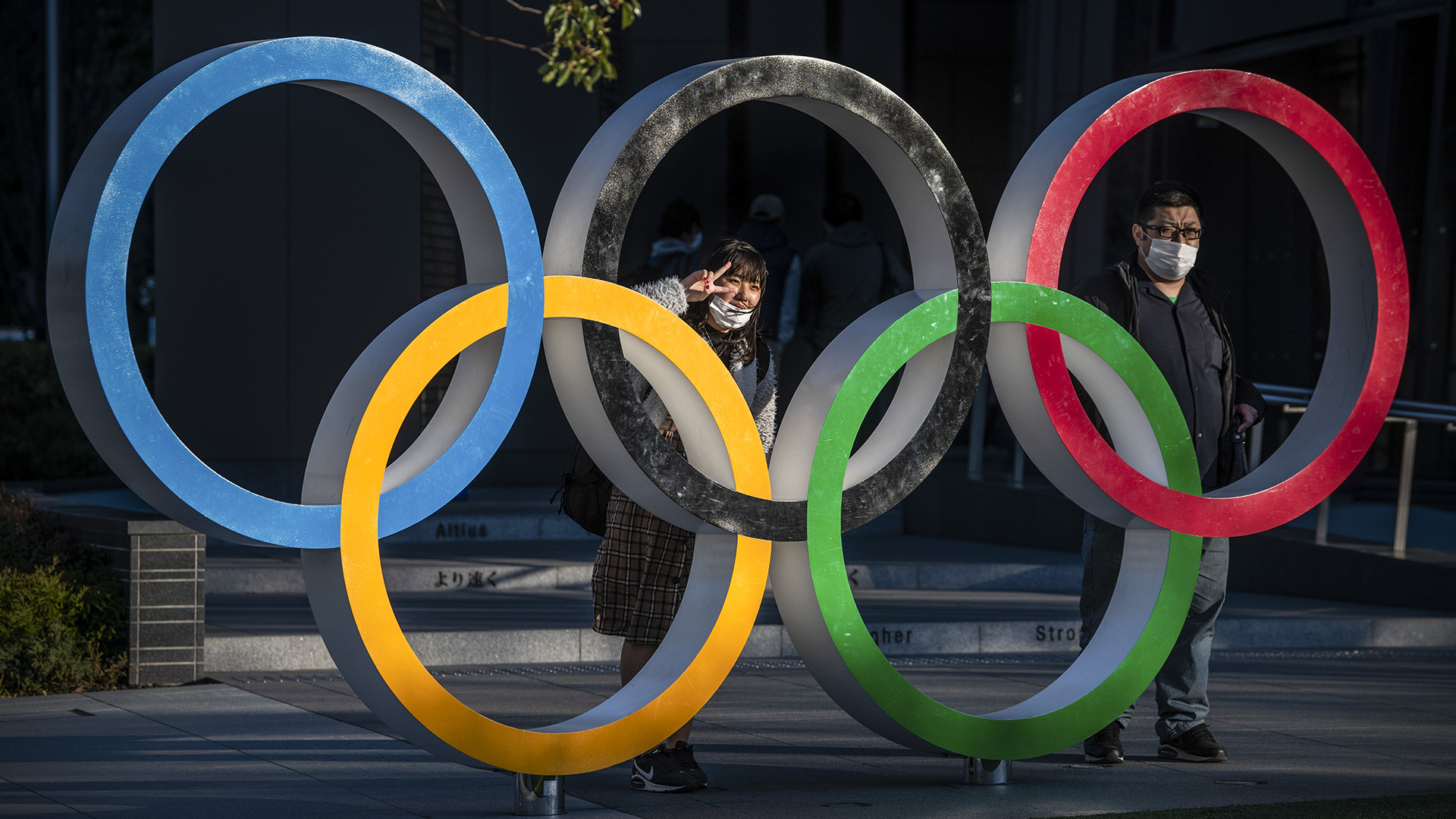 PUNE, India — The Tokyo Olympic Games are likely to be the most unpredictable — even if they finally happen. Organizers have said athletes might take daily Covid-19 tests, and spectators might not be allowed.

“Uncertainty is not only due to the lack of events that have taken place, but also due to disturbances to preparation,” Simon Gleave, head of analysis at sports analytics firm Gracenote Sports, told Zenger News.

Gracenote has estimated that the U.S. will retain the highest medal tally of 114 — for the seventh straight time. China might be second with 85 medals, and Russia third with 73. Japan, the host, might find itself in the fourth spot with 59 medals.

And, for such a large population, Abhinav Bindra is the only Indian to have won gold in a single-event category at the Olympics in 2008. Of the total nine golds, India’s hockey team got the other eight — the last one in 1980. More than 80 Indian athletes have qualified for the Tokyo Olympics. Around 20-30 are in the fray to make it to the event by the time it commences in July.

But there have been roadblocks. Daily Covid-19 cases consistently crossed the 300,000-mark in the country in the past week.

India’s women’s 4x100m and men’s 4x400m relay teams have been forced out of next month’s Olympic qualifying World Athletics Relays in Poland after the suspension of a connecting flight to Amsterdam owing to a steep rise in Covid-19 cases in India. Wrestlers headed to Sofia, Bulgaria, via Amsterdam for the World Qualifiers also couldn’t fly out. New travel arrangements are being made.

Indian steeplechaser Avinash Sable, who qualified for the Tokyo Olympics, has tested positive.

At least one country, South Korea, has begun fast-tracking vaccinations for Olympics athletes and other staff. But in India, the body responsible for selecting athletes to represent India at the Olympic Games hasn’t been able to get Games-bound athletes inoculated.

“We’ve written to the health ministry and want the vaccination drive to start as soon as possible,” Rajeev Mehta, secretary-general of the Indian Olympic Association, told Zenger News. “Until now, we haven’t received any communication from the ministry.”

India is critically low on vaccines.

The host country declared a state of emergency in Tokyo and three other prefectures due to a surge in Covid-19 cases. This would be the third emergency since the Games were postponed.

And, a police officer helping with Japan’s Olympic Torch Relay has become the first participant related to the event to be diagnosed with Covid-19.

The Tokyo 2020 organizing committee recently said no participating athlete has requested to get vaccinated before the Games. The vaccine roll-out in Japan, too, has been slow, with less than 1 percent vaccinated so far.

American Olympic hopefuls have indicated they are willing to receive Covid-19 jabs. The Australian government has said about 2,050 athletes and staff will be considered a priority group under their vaccine rollout program. 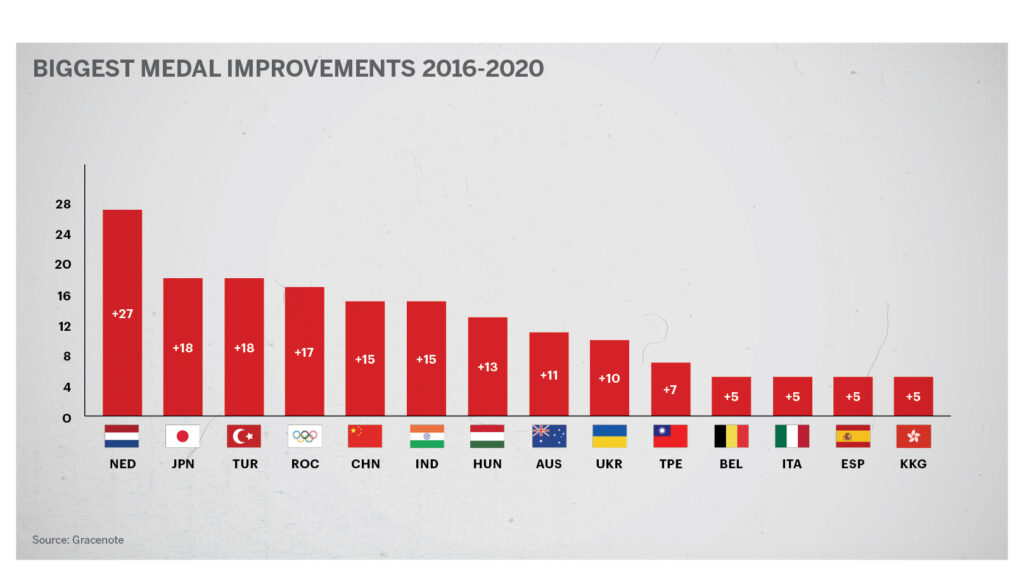 Arundhati Pantawane, a former gold medal winner in badminton at the 2011 National Games, told Zenger News that the Covid-19 pandemic is “a major issue”.

“It is affecting the players’ practice schedules; tournaments are being canceled,” she said, adding that it is taking a toll on the athletes mentally and physically.

“I do not wish to speak on the medals or the prediction, but the importance should lie on the overall development of the players,” Adille Sumariwalla, president of the Athletics Federation of India, told Zenger News.

“The system will assist in the development of the sport. We are working towards it. If the process is right, the results follow. We will try our best to open our account in the upcoming Olympic Games, especially in athletics.”

The predictions by Gracenote have been accurate on most occasions. The 2016 Rio Olympics gold medal tally for the U.S. was highly accurate, with a forecast of 41 medals, and the actual number was 46.

It predicted the top five countries — U.S., Great Britain, China, Russia, and Germany — with complete accuracy, though the final tallies of the countries were different from the predictions.

Gracenote also accurately predicted the top performers at the 2016 Rio Olympics, with Michael Phelps winning five gold and one silver against a prediction of four gold and two bronze.

It predicted the U.S. to stay on the top at the 2016 Rio Olympics with 92 medals. It won 121. Gracenote had predicted five medals for India in 2016 — one gold and five bronze. However, India could bag only two — silver in badminton by P.V. Sindhu and bronze in freestyle wrestling by Sakshi Malik.

In 2019, Gracenote had released another set of predictions, with India poised to bag 14 medals — one gold, five silver, and eight bronze. The new tally has added more gold to the kitty. The prediction chart was released on the occasion of ‘100 days to go for the Tokyo Olympics’.

“Our Virtual Medal Table is based on results data from World Championship, World Cup, Grand Prix, and other similar events in between the Olympic Games,” Gleave told Zenger News.

“The effect of Covid-19 on a country is not a factor, and the position of the U.S. in the table is based on the performances of the country’s athletes since 2016.”

Gleave says changes to the Virtual Medal Table are due to events that have taken place since it was released. Like, athletes who have retired and have been removed, among other things.

India might get eight medals in shooting, four in boxing, three in wrestling, and one each in archery and weightlifting.

“Players are working tirelessly,” Jiwanjot Singh Teja, India’s former national archery coach, told Zenger News. “Every player wishes to bring laurels for the country and put in all his efforts. However, the shortage of adequate supplies doesn’t let them reach the top.” 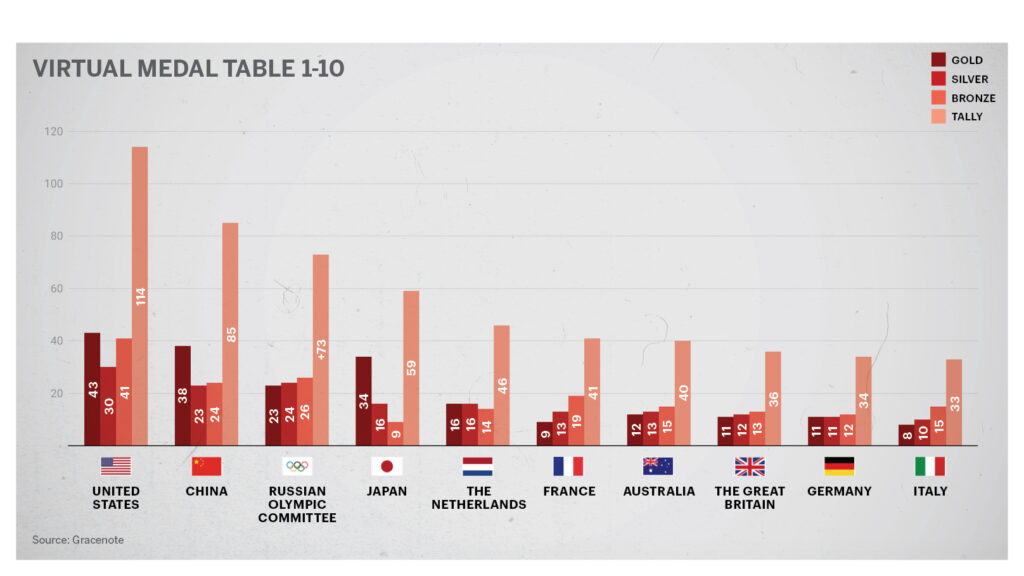 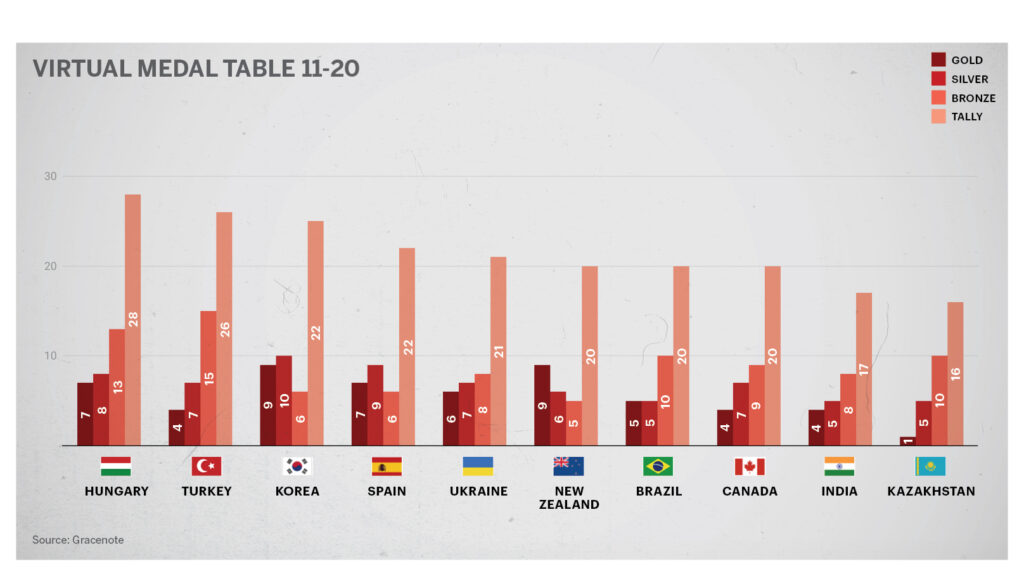 “We predict that India would bag 17 medals, but our teams are finding it difficult to clear the qualifiers.”

“When you observe the selection process of other countries, each team or an individual athlete is given three to four years to train. In India, the case is not the same. The coaches and teams frequently change, leading to lack of focus.”

Teja believes the absence of long-term planning is the biggest problem ailing India — a country that wishes to host the 2048 Olympic Games — in putting up a stellar show.

Pantawane, too, believes 17 is a significant number but said: “Nothing is impossible.”

“We have probable winners from badminton, wrestling, archery, table tennis, sailing, shooting, and boxing, so far. So, why not. I do hope that the prediction comes true.”