Since Indian women joined politics, they have been marked by a typical sartorial style. 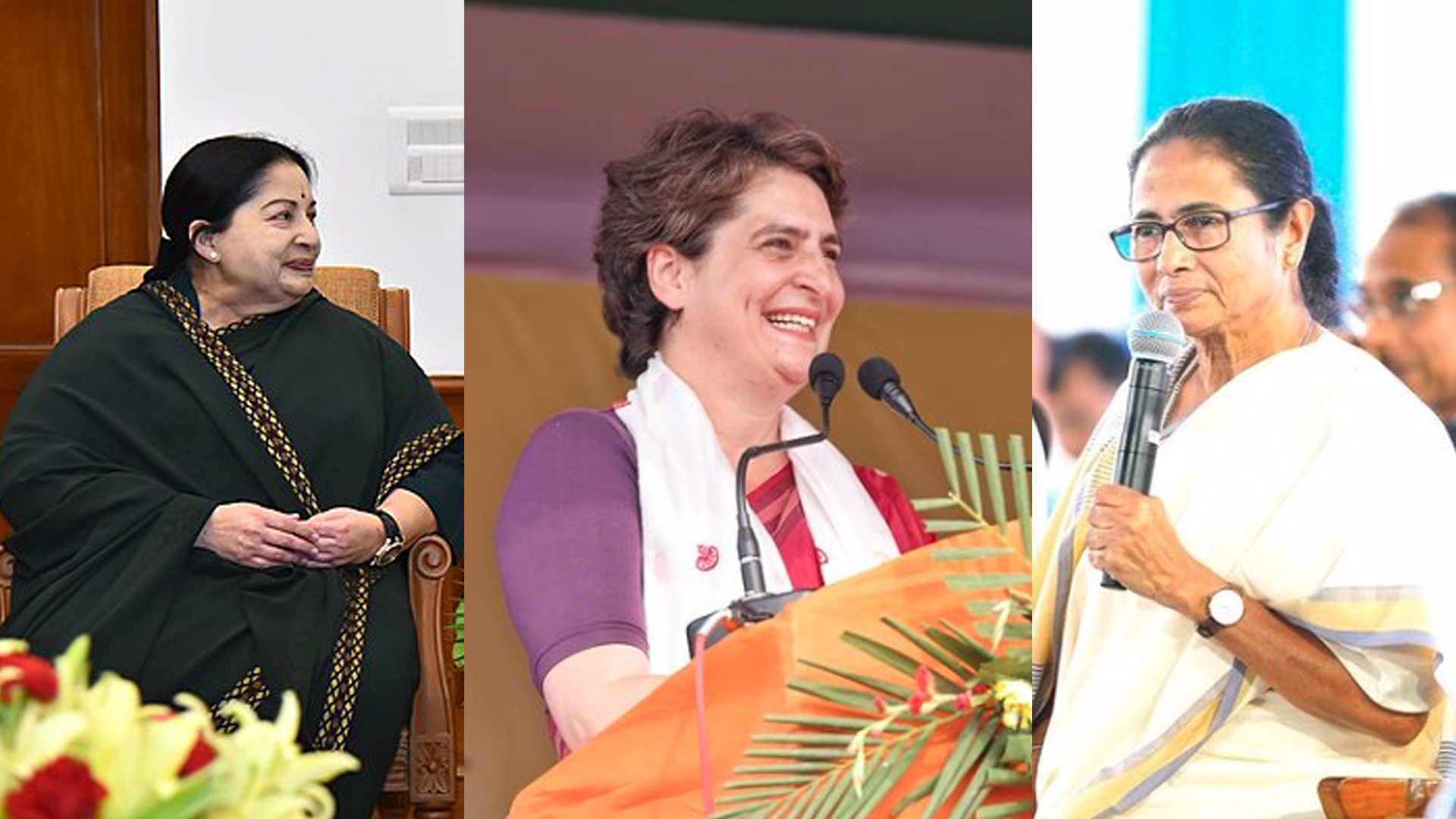 NEW DELHI — Before J. Jayalalithaa joined politics and became four-time chief minister of south Indian state Tamil Nadu, she was known as “Queen of Tamil cinema” and had acted in over 140 films.

When the Tamil Nadu assembly was in session on March 25, 1989, some MLAs of M. Karunanidhi-led Dravida Munnetra Kazhagam political party assaulted her. Media coverage of her emerging from the assembly with messy hair and torn saree won a wave of sympathy from the public. That incident has made to the movie on Jayalalithaa’s life, “Thalaivi”, slated for release this year.

Since Indian women joined politics, they have been marked by a typical sartorial style. Most Indian women wore sarees or salwar kameez then, which reflected in the political landscape. But while Indian women moved on to other attires, a woman leader still gets noticed or escapes criticism by ‘dressing down’.

“India is still a third-world country, and the aspect of modernity cannot be accepted too quickly, especially when it comes to female politicians,” Shaktirupa Bhattacharya, Bollywood costume designer for “Soni” (2018), told Zenger News.

“A lot of attention is given to what a woman is wearing, if she is in public, as compared to men,” Shazia Ilmi, member of Bharatiya Janata Party (BJP), the current ruling political party of India, told Zenger News.

“When you are in politics, and you work for others, your attire needs to conform. In short, for women, their entire life revolves around how they are seen.”

In the 1975 political drama “Aandhi”, directed by Gulzar, actor Suchitra Sen starred as a woman politician Arti Devi. The audience was quick to notice her character’s similarities with the then-Indian Prime Minister Indira Gandhi, both in her dressing and her powerful presence on screen.

Be it Katrina Kaif in “Raajneeti” (2010), or Kirti Kulhari in “Indu Sarkar” (2017), the actresses portrayed female leaders in their respective films, who despite their evolution of power in the society, continue to choose an attire that reiterates the patriarchal mindset prevalent around them.

In “Madam Chief Minister” (2021), directed by Subhash Kapoor, Richa Chadha stars as a Dalit and “hustles to make it big in life”. But her style with neutral colors and unglamorous clothes try to downplay her “untouchable, unstoppable” image that she attempts to depict.

Ilmi asserts that many female leaders would like to wear “every day” clothes, but they cannot because of the constant public scrutiny.

“I know my ‘Lakshman Rekha [a strict rule, never to be broken]. That is something that is impressed upon our minds. And since most women in politics, like me, have made it on their own, they would not easily break the dressing protocol.”

Breaking this “protocol” invites criticism from none other than male counterparts.

In 2019, BJP MP Harish Dwivedi took a jibe at Priyanka Gandhi, general secretary of the Indian National Congress. He tweeted that when Gandhi stays in New Delhi, she wears jeans and a top, but when she pays a visit to her constituencies, she adorns a saree.

Recently, West Bengal BJP President Dilip Ghosh made a stark comment on Mamata Banerjee, currently chief minister of West Bengal, for “exposing” her injured leg during election campaigns. Banerjee is known for wearing white cotton sarees with a navy-blue border and flip-flops as a uniform. Her “exposed” portion was bandaged.

Albeit, during an election rally, Ghosh said: “She is wearing a saree with one leg covered but kept another open for viewing. I haven’t seen anyone draping a saree in such a way. If she has to display her leg, she can very well wear Bermuda shorts.”

When his remarks sparked outrage, Ghosh was unapologetic and defended himself by claiming that “saree is a symbol of decency, and we do not expect such behavior from a chief minister.”

Sometime back, Priyanka Chaturvedi, deputy leader of a political party Shiv Sena, put up a picture of hers with a tweet: “The country’s ‘sanskaar’ [culture] are impacted by men who sit and judge women and their choices.”

She was reacting to a comment made by Tirath Singh Rawat, the chief minister of the northern India state Uttarakhand, stating women who wear ripped jeans set a bad example for children. “Change your thoughts; only then will the country change,” she said.

“We as a nation put strong-willed goddesses on a pedestal and worship them,” Anusha Srinivasan Iyer, an award-winning international filmmaker and Earth activist, told Zenger News.

“It is a volte-face when it comes to real women who are judged based on their attire and warped men mindsets. The more we open our minds to making women independent and empowered, the more our nation will progress. It is time we stop being two-faced.”

While most viewers tend to celebrate female actors on the silver screen, the exact audience condemns them when they enter the political sphere. Incidentally, like Jayalalithaa, they are also expected to follow the defined ‘sanskari’ look.

In 2019, when actresses and now Trinamool Congress MPs Mimi Chakraborty, 32, and Nusrat Jahan, 31, posted their first-day photos from the Parliament, they were subjected to constant trolling by social media users. They were wearing shirts, jeans, and pants.

Another TMC MP, Mahua Moitra, a former J.P. Morgan banker, is often criticized for her sense of dressing apart from her Bobbi Brown eyeliner or her Louis Vuitton purse.

According to Prabhloch Singh, who was the media advisor to Bollywood actress turned politician Kirron Kher during the Lok Sabha elections 2019, a female leader’s look plays a significant role in defining her appeal to the masses.

“It is not only with female politicians but India at large,” he told Zenger News.

“The youth expects the politicians, be it male or female, to be real. But if you are in a smaller town, female politicians have a compulsion to dress in a certain manner. They do it not for conformity but because they feel their voters might relate to them.”

Internationally, several leaders like Theresa May, former Prime Minister of the United Kingdom, have been criticized. Several in media wrote more about May’s love for leopard print kitten heels than her opinions. British actor turned Member of Parliament, Tracy Brabin, faced the brunt for wearing a dress exposing her shoulders in the House of Commons.

American politician Hillary Clinton has been fixated on her pantsuit look, which is otherwise associated with power and is male-coded. Alexandria Ocasio-Cortez, U.S. Representative for New York’s 14th congressional district, is famous for her exuberant red lips.

In fact, at her swearing-in ceremony in January 2019, she donned an all-white pantsuit complete with her statement lips. Her followers were delighted to see how she embraces her femininity with intent and challenges the norms of how she is expected to be in public.

U.S. Vice President Kamala Harris is taking fashion in an aspirational way by using her attire to symbolize her efforts and inclinations. After winning the election, she wore a white suit by designer Carolina Herrera in a nod to the women’s suffrage movement for her address to the nation.

She even highlighted two Black designers while being sworn in as the first female Vice President of the U.S.

Born to a Jamaican father and an Indian mother, Harris flaunts her pantsuits, dresses, and high heels as Indians cheer her. But her Indian counterparts continue to dress down.

“We are a long way away from making women truly independent,” Iyer said. “Maybe our entertainment industry needs to make more empowering films and move away from regressive television where child marriage shows hit high TRPs.”

“Yes, change is coming, but people at large need to change and not judge women according to their dress or how they are looking,” Ilmi said. “It is about me and my politics, but they make it all about the appearance.”