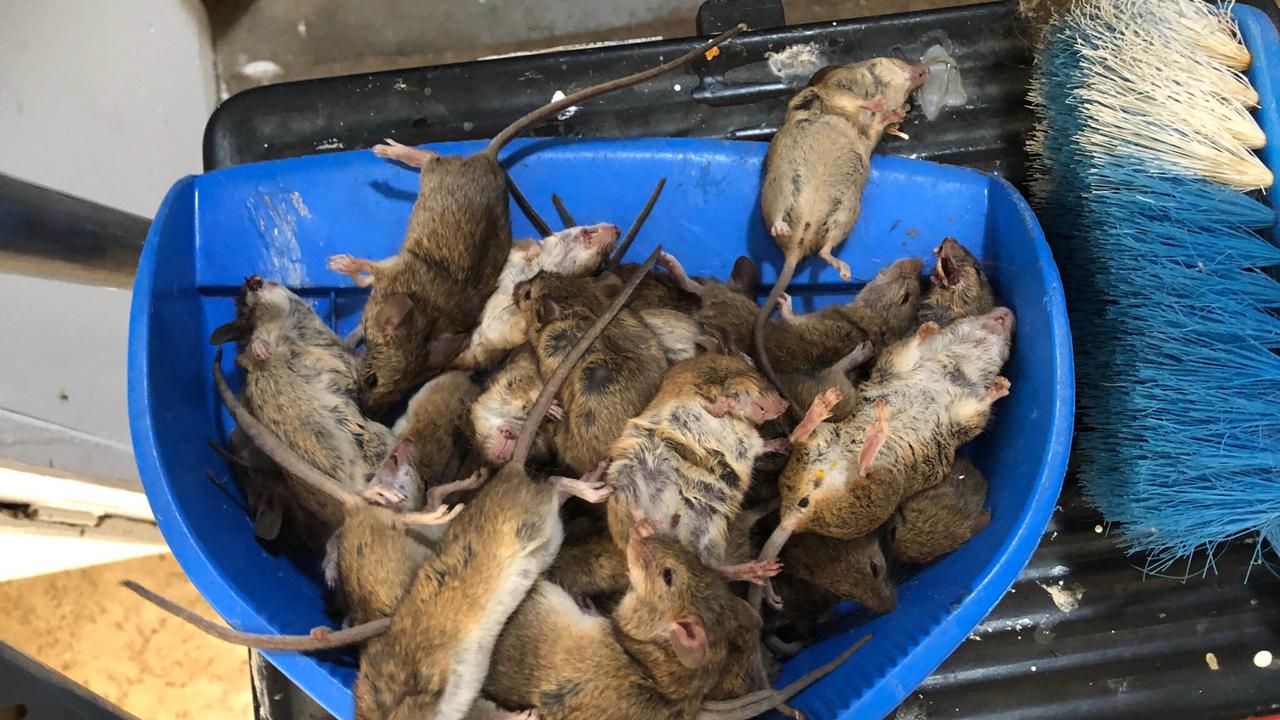 The psychological and financial affect of the mice plague on rural communities is immeasurable. (Supplied by The Coonamble Times/AAP Image)

DUBBO, Australia — Farmers are begging for help to end a biblical mouse plague that has for months troubled western areas of the South-eastern Australian state of New South Wales, where the communities are still trying to recover from drought.

Mice have been running rampant through large tracts of New South Wales and parts of the North-eastern state of Queensland, destroying crops and causing significant damage to tonnes of stored hay and grain.

Torrential rain that fell across much of New South Wales in March was hoped to put a significant dampener on their numbers ahead of the winter crop sowing.

However, the rain has had little impact in only a few areas, including Warren, northwest of Dubbo city in New South Wales.

Cold weather has caused a lull in other communities in the central west.

But in most of the afflicted towns, the mice — which can breed from six weeks old and churn out a litter every 21 days — continue to wreak havoc unabated.

New South Wales farmers are calling for help to end the plague, saying they can’t rely on weather to put a stop to the pests.

Baiting to kill the mice is another expense on top of grain and productivity losses, followed by years of severe drought.

“In a modest 1000 hectare cropping area, it costs around AUD 17,000 ($13245.97) for one baiting run before the crop is even planted,” Matthew Madden, New South Wales Farmers grains committee chair said.

“In many areas, farmers are already on their third or fourth baiting run with costs only adding up and no end in sight.”

New South Wales Health has been notified of 23 case of leptospirosis — a rare disease which can cause kidney failure and meningitis which mice commonly pass on — so far in 2021, compared to 11 last year.

“They are causing nightmares in the home, chewing through mattresses, spoiling food, and people are waking up with them on their face,” Madden said in a statement.

CSIRO (The Commonwealth Scientific and Industrial Research Organization) mice expert Steve Henry the impact — both psychological and financial — on affected communities is immeasurable.

Some farmers gave up on their summer crops and just plowed them back in, and once he spoke to was emptying her 20 mice traps at least three times a night.

“I’m even hearing stories about local councils have trouble dealing with all of the dead mice that people are putting in their garbage bins because they’re starting to make the streets smell,” he said.

“People are psychologically exhausted by this — the mice are just everywhere.”

“Every time you want to try and get some clean linen out of the cupboard, you’ve got to take it out, wash it, hang it on the line, and put it on your beds straight off the clothesline because if you put it back in the linen closet, the mice are going to be into it again.”

“No one ever forgets living through a mouse outbreak. It is such a distressing thing.”

Baiting is essential to the success of the winter crop, he says, but the mice plague will eventually take care of itself.

“Mouse numbers crash when numbers are so high that disease is spreading (and) they’re running out of food.”