Online classes indirectly made it more difficult for these businesses to continue, forcing many to close down. 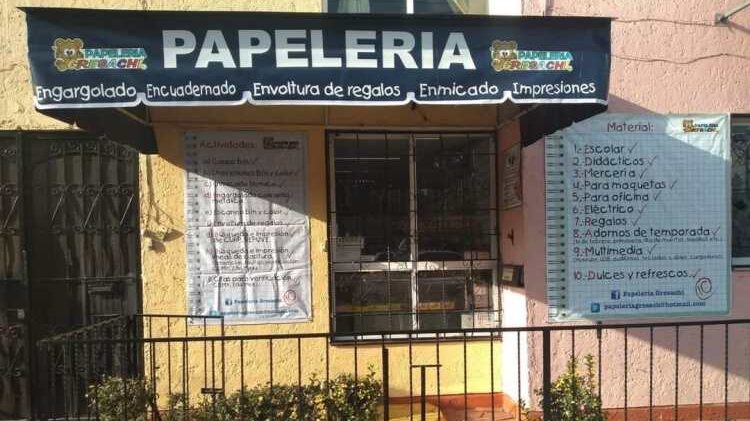 Despite struggling with the pandemic, the Sanchez family has kept their stationery store thanks to their creativity and the fact that they do not need to pay rent. (Christian Valera Rebolledo/Café Words)

Without children and parents to buy spreadsheets, notebooks, paint, adhesive sticks, and other school supplies, Mexican stationery stores have hit rock bottom amid the pandemic.

For the owners of these businesses, the COVID-19 pandemic has meant a severe economic crisis due to people’s isolation during 2020 and schools shifting to online classes.

Amid the crisis, however, some entrepreneurs have seen an opportunity to reinvent themselves.

“We had no choice. As some people say, ‘either adapt or die,’ and well, that is what we have done,” said Grecia Sánchez, owner of the Gresachi stationery store in Veracruz. “The first we had to do was to guarantee our safety. It was not that difficult to adapt to sanitary measures because we already had a window between the customers and us.”

While Gresachi is a family business and was not forced to lay off staff, it has had to find new ways to attract customers. When businesses started to reopen, they launched a document printing service.

“We were not doing very well, to be honest. We sometimes managed to sell a pen or two, some job applications, copies, and overall, minimal things, not enough to pay the electricity bill that was eating us,” said Sánchez. “One way we found out to continue making an income was allowing our customers to print official documents.”

The idea came from her daughter, Roxana. Then, customers started to print birth certificates and CURPs [unique population registry code], requested by the government for the COVID vaccine application.

“When we began, few people came to us, until we put on some advertisements outside the store. However, when the government launched the vaccination campaign, we started to receive several customers that wanted to print the needed documents,” said Sanchez.

By July 2020, businesses such as Sanchez’s store registered a drop in sales of up to 50 percent, which led many to close down due to an inability to pay rents, taxes and services.

“We have the good fortune that the stationery store is, itself, another of our house’s rooms. That is the reason why we had a window between the customers and us. We do not need to pay additional rent, and perhaps that has allowed us to survive. We have already been working in the store for eleven years. If we had been renting, we might have lost everything, as the entire family depends completely on the business,” said Sanchez.

The Mexican government has announced that states that have COVID-19 cases under control will reopen schools, and the vaccination campaign is branching out to grant immunity to teachers. With this on the horizon, stationery stores may soon see a rebound.

“Well, on the one hand, the fear of COVID continues because many of us are not yet vaccinated and children themselves also lack the vaccine. However, on the other hand, if children return to school, it will be good for us because the business will reactivate. We would be able to return to our usual sales, and that will be good for us, as we have a lot of debts,” said Sanchez.

Meanwhile, the National Chamber of Commerce, Services and Tourism (Canaco Servytur) warned in January that, if isolation measures continue, at least 40,000 businesses, including small and medium-sized companies, could close down in Mexico City alone, leading to more than 200,000 jobs being lost.