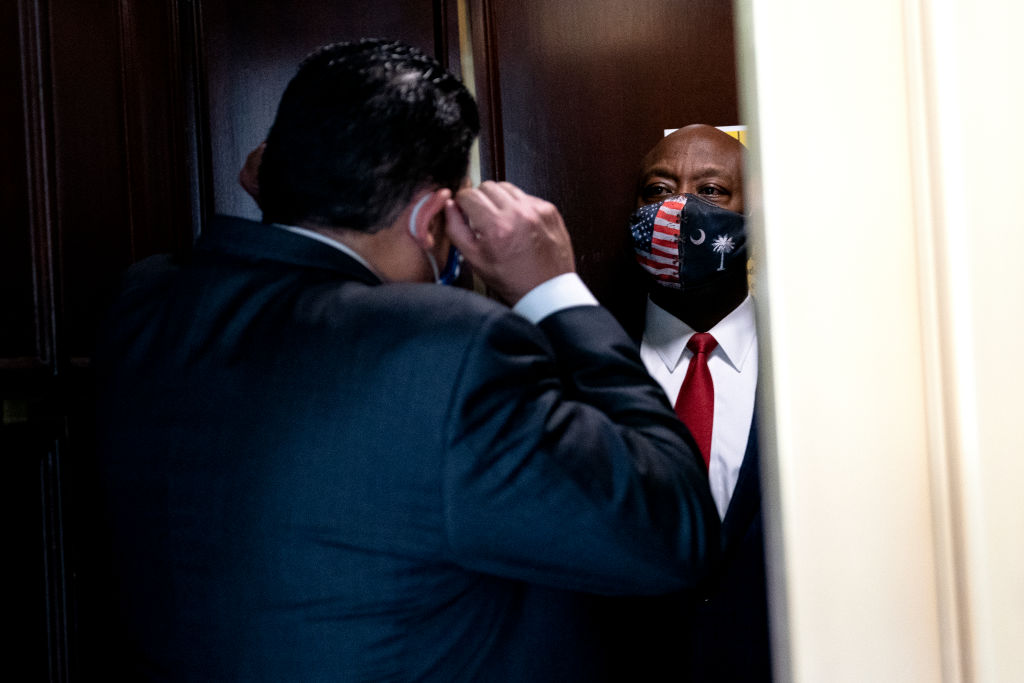 WASHINGTON — When Sen. Tim Scott (R-S.C.) — the only current black Republican senator — declared “America is not a racist country” in his response to President Joseph R. Biden Jr.’s address to Congress this week, he sparked strong reactions from both sides of the political aisle.

“Our nation is starving for more than empty platitudes,” the junior senator for South Carolina said on Wednesday night. “We need policies and progress that bring us closer together. But three months in, the actions of the president and his party are pulling us further apart.”

Biden, in his first address to a joint session of Congress, had raised concerns about heightening racial divisions after Donald J. Trump’s four years as president, and asked: “Can our democracy overcome the lies, anger, hate and fears that have pulled us apart?”

The senator responded by criticizing several of Biden’s proposals, before praising the former Republican president’s “Operation Warp Speed” program for getting vaccines developed. He then addressed hatred — including hatred he said had been targeted at him.

“Nowhere do we need common ground more desperately than in our discussions of race,” Sen. Scott said. “I have experienced the pain of discrimination. I know what it feels like to be pulled over for no reason. To be followed around a store while I’m shopping.”

“I get called Uncle Tom and the N-word by progressives — by liberals,” he added. “Believe me, I know our healing is not finished.”

“Hear me clearly: America is not a racist country.”

The next morning, Twitter removed the phrase from its trending topics.

Reactions from both sides of the aisle

In the wake of the Republican senator’s speech, former Vice President Michael R. Pence thanked him — on Twitter — for being “strong, honest, and genuinely inspiring.”

Current Vice President Kamala D. Harris, the first black person to serve in her position, said on “Good Morning America” that while she agrees with Scott that America is not racist, “we do have to speak truth about racism in this country and its existence today.”

“The president never accused America as being racist. He did say that more needs to be done to advance racial equity,” Norton told Zenger News, identifying housing discrimination and inequitable vaccine distribution as areas where Biden called for authorities to work harder.

“The president and others, including some Republicans, have made the case for more racial inclusion,” she said.

Linda Thornton Thomas, president of the Prince Georges County Chapter of the National Association for the Advancement of Colored People in Maryland, said she thought debates about whether America as a country is racist are beside the point.

Instead, she said, it is clear that “racism exists in America for blacks and whites.”

Thomas called on Republicans and Democrats to cool their rhetoric and try to work together in the same way she said white and black people had worked to foster community in the 1960s.

“We can’t get things accomplished by ourselves. Senator Scott knows if he walks anywhere in his neighborhood in South Carolina what will happen,” she said.

“We are hurting our own children with these divisions.”

Raynard Jackson, a Republican political consultant, said Scott’s comments are best understood in response to claims that there is systemic racism in America.

Jackson said he cannot understand why “people still blame systemic racism” for problems that exist in black communities when many are governed by black leaders.

“How can we talk about America is racist when you have a black mayor of Baltimore, a black prosecutor, a black police chief, a black U.S. congressman, and they control all of the power?” he said.

“It is the same thing in Chicago [and] Atlanta,” he said. “These cities have some of the highest murder rates in terms of black-on-black crime. Look at St. Louis, where I am from. … It is not the color of a person’s skin, but the policies that they are pushing that is destroying the black community.”

Jackson, a senior adviser to the successful 2018 campaign of Florida Gov. Ron DeSantis, said he is glad Republicans have leaders like Scott to speak out on issues of race.

“Tim Scott is only speaking the truth,” he said. “Trump was here for a moment, but Scott has been a moral compass on the issue of race for decades in the conservative movement.”