Biden’s Climate Jobs Plan Gets Some Support From Big Oil 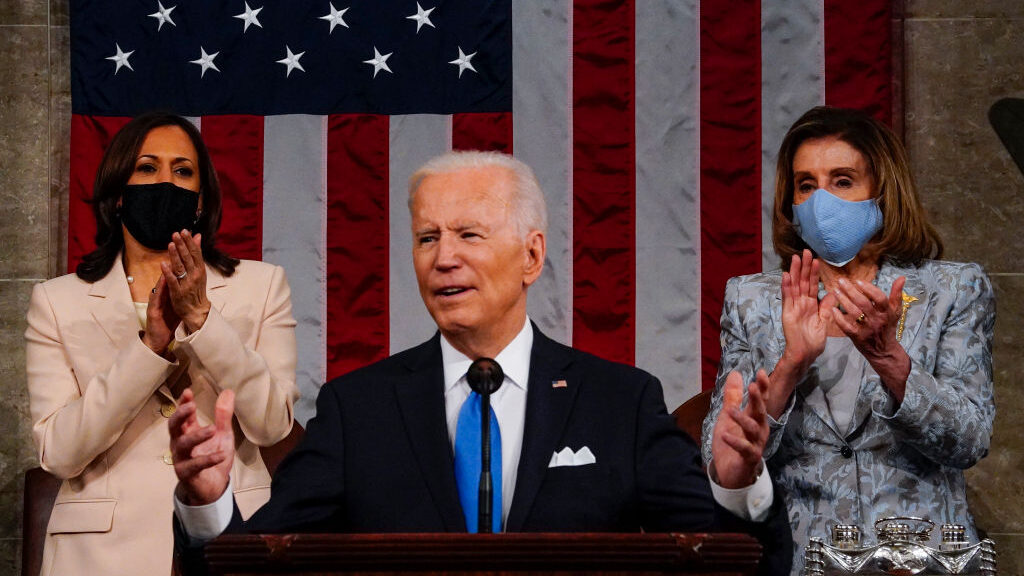 U.S. President Joe Biden addresses a joint session of Congress as Vice President Kamala Harris (L) and Speaker of the House U.S. Rep. Nancy Pelosi (D-CA) (R) look on in the House chamber of the U.S. Capitol as he discusses the job potential of clean energy. (Melina Mara-Pool/Getty Images)

While touting the job-creating potential of new environmental projects during his speech to a joint session of Congress on Wednesday night, President Joseph R. Biden Jr. already had the ear of a number of Big Oil executives.

“For too long, we’ve failed to use the most important word when it comes to meeting the climate crisis: jobs,” Biden said in his speech. “For me, when I think climate change, I think jobs.”

Unlike environmental proposals from previous Democratic presidents, Biden is getting some support from a fossil fuel industry that is taking steps to address climate change.

But congressional critics said Biden’s policies would have adverse effects.

“President Biden needs to be fully transparent with the American people,” said Rep. Garret Graves of Louisiana, the top Republican on the House Select Climate Committee.  “Under Biden’s Paris pledge, Americans will pay more to fuel their cars, heat and cool their homes, and for every other good and service that requires energy.”

Republicans said before the virtual Leaders Summit on Climate hosted by Biden on April 22 and 23 that the U.S.’s role in combating global climate change will be detrimental to American industry and cause a loss of jobs.

On Earth Day, April 22, Biden announced an ambitious new climate goal that would require significant changes in how the country powers its economy. However, his administration is still cobbling together details on how to meet the mark of reducing U.S. carbon dioxide emissions 50 percent by 2030. Several options are available, including policies proposed in infrastructure legislation being negotiated in Congress. Some have questioned how such an aggressive target will be met in under 10 years.

Biden’s push comes as the American Petroleum Institute — the lobbying arm of the major U.S. oil producers — has for the first time proposed a “carbon-pricing” policy that would amount to a tax on fossil fuel usage.

“API’s climate framework represents a path forward and demonstrates that we don’t have to choose between environmental progress and energy security,” the group’s president and CEO, Mike Sommers,  said in response to Biden’s speech. “Instead of harmful mandates, new taxes and misguided restrictions on our nation’s vast energy resources, Congress and the administration should focus on accelerating innovation and reducing emissions through market-based solutions.”

It’s a 180-degree turnaround for the group, which strenuously opposed a carbon-tax policy in 2010, the last time it was considered by a Democratic Congress with a Democrat in the White House.

“API’s new support for federal legislation to accelerate the development and commercialization of clean technologies and reduce emissions could be a turning point in the national climate debate,” said Jason Grumet, president of the Bipartisan Policy Center.

Climate change advocates hailed Biden’s announcement as the most aggressive ever for the country, going twice as far as former President Barack Obama’s 2015 pledge of a 25 percent emissions cut by 2030. Some of Biden’s proposals to meet the emissions cuts stem from ideas funded in the American Jobs Act, a $2 trillion infrastructure proposal the administration released in March.

“Within our climate response lies an extraordinary engine of job creation ready to be fired up,” Biden said through his official presidential Twitter account.

In addition to boosting renewable energy production, Biden is also proposing to promote electric vehicle adoption, as well as advance the development of new technology to extend the life of some fossil fuels. Biden’s plans drew praise from the Carbon Capture Coalition, a group of American industries that supports technology that would capture emissions from power plants and store it underground, allowing continued use of coal for power generation while still meeting emission goals.

“The president’s announcement appropriately places carbon capture at the heart of the administration’s strategy for putting our nation on a path to achieving net-zero emissions by 2050,” the coalition’s director, Brad Crabtree, said in a statement.

With its lower emission rates, natural gas is likely to see more reliance in the electric grid as the U.S. moves away from coal, giving petroleum companies some avenues to offset efforts to drive down fuel consumption.

The Biden administration may be facing a headwind on its path to halving U.S. emissions, with greenhouse gases expected to rise in the U.S. and around the world as the economy begins to reopen following coronavirus pandemic restrictions.

A BloombergNEF study in January showed that greenhouse gas emissions dropped 9 percent in 2020 from 2019, the lowest the U.S. has produced in three decades.

The International Energy Agency now forecasts that worldwide emissions will snap back to where they were — and beyond —- in 2021 as the economy surges back. The international group’s April report said that the 4 percent drop in global energy use in 2020 will give way to 4.6 percent growth in demand in 2021.