The family of Ashli Babbitt, whose life was taken by a police lieutenant’s bullet, will take their case to federal court. 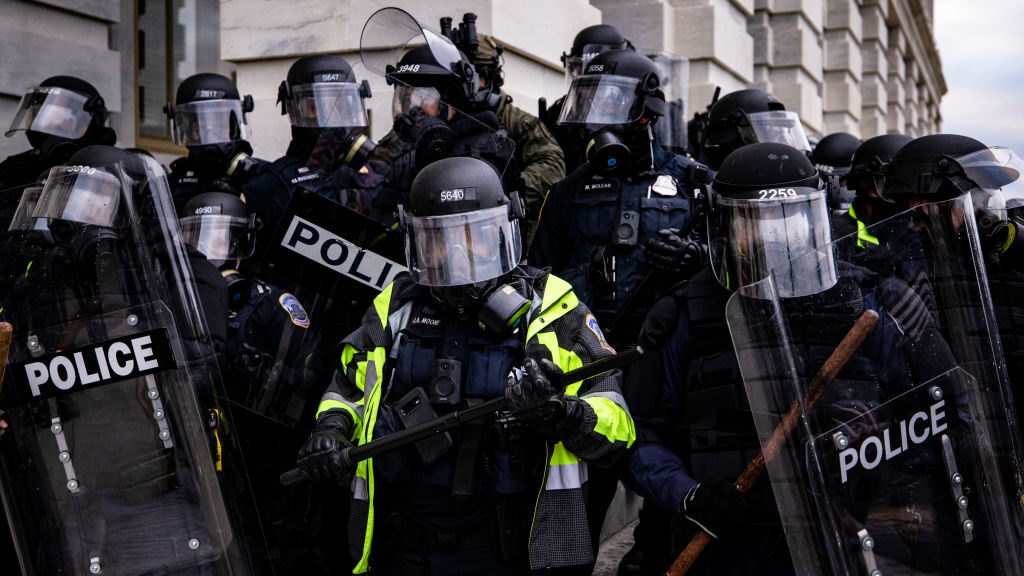 Police officers attempt to push back a pro-Trump mob trying to storm the U.S. Capitol following a rally with President Donald Trump on January 6, 2021 in Washington, DC. (Samuel Corum/Getty Images)

The family of Ashli Babbitt — the only person shot during the Jan. 6 riot at the U.S. Capitol — plans to sue the U.S. Capitol Police department, and the officer who shot her, for at least $10 million, their attorney said.

The civil suit will follow the April 14 decision by federal prosecutors not to seek criminal charges against a plainclothes police lieutenant whose single shot killed Babbitt, who was unarmed.

Babbitt, a decorated U.S. Air Force Gulf War veteran, was struck in the shoulder while attempting to illegally enter the Speaker’s Lobby, an area near to the House floor, through a smashed window beside a barricaded door. It is unclear whether she heard shouted warnings over the crowd around her before she climbed within view of the lieutenant, who drew his gun and fired. Smartphone video shows Babbitt being struck in the shoulder and falling back onto a patterned marble floor, bleeding. Police quickly summoned medical help and evacuated her on a stretcher. She was pronounced dead at Washington Hospital Center, leaving behind a husband, Aaron, and four younger brothers.

The police lieutenant who shot Babbitt has yet to publicly provide his side of the fatal encounter, and law enforcement officials have not released his name. Terry Roberts, the Babbitt family’s lawyer, said he knows the shooter’s name and is aware of some of his police service record.

“A rookie police officer would not have shot this woman,” Roberts told Zenger News. “If she committed any crime by going through the window and into the Speaker’s Lobby, it would have been trespassing. Some misdemeanor crime. All a rookie cop would have done is arrest her.”

“And he has plenty of other officers there to assist with arrest,” he said of the shooter. “You had officers on Ashli’s side of the door in riot gear and holding submachine guns. And on the other side of the door you have another uniformed officer 6 or 8 feet away. Whose life is he saving by shooting her? … She’s not brandishing a weapon. She’s on the window ledge. And there’s no reason to think she’s armed.”

The police lieutenant might assert “qualified immunity” in an attempt to shield his personal assets from any damages a court might award. But “I don’t know how on earth he could. This is a clear case of excessive force,” Roberts said. Law enforcement officers in the U.S. cannot assert qualified immunity protection in cases where victims, or their estates, prove their rights were “clearly established” at the time of an incident.

Roberts told Zenger News that “within the next ten days” he will serve notice to U.S. Capitol Police, which patrols the office buildings and grounds of the Capitol, that he intends to file suit in Federal District Court in Washington, D.C. “We intend to vindicate Ashli’s constitutional rights, which were egregiously violated,” said Roberts, referring to a Fourth Amendment claim. The suit, he said, will also include a civil rights claim filed personally against the lieutenant.

Pressing Babbitt’s family’s claim will not be quick or easy, he said. U.S. Capitol Police is a legislative-branch federal agency overseen by the Committee on House Administration, chaired by Rep. Zoe Lofgren (D-Calif.). That narrows the family’s legal options. Under the Federal Tort Claims Act, a government agency accused of wrongdoing must have six months to investigate and decide whether to offer a settlement. Unless the agency waives that period of administrative review, Roberts said, he can’t go to court until at least the end of October.

Peter Whippy, the Administration committee’s communications director, did not respond to multiple requests for information about the lieutenant’s name and reasons for concealing it.

The Office of the Chief Medical Examiner in Washington ruled Babbitt’s death a “homicide,” but has not released an autopsy report. Under D.C. law, only “next-of-kin” and officials executing “a validly issued subpoena or court order” are entitled to the document, according to the agency’s website. Roberts said he has received a copy on the family’s behalf.

The U.S. Department of Justice said in an April 14 press release that it had closed its investigation into the shooting without filing criminal charges. “Prosecutors would have to prove not only that the officer used force that was constitutionally unreasonable, but that the officer did so ‘willfully,’ which the Supreme Court has interpreted to mean that the officer acted with a bad purpose to disregard the law,” according to the agency. The press release said the investigation “revealed no evidence to establish that, at the time the officer fired a single shot at Ms. Babbitt, the officer did not reasonably believe that it was necessary to do so in self-defense or in defense of the Members of Congress and others evacuating the House Chamber.”

Roberts said Congress owes the public an explanation. “What it looks like is this guy shot this lady for no legitimate law enforcement purpose. And you know, they ought to be pretty ashamed of that,” he said. “I mean, [it’s] pretty, pretty bad, that you don’t hear any member of Congress speaking out about this thing. In a free country like ours, it’s very strange and odd that they wouldn’t identify the officer, or even provide some details, explaining why he had to kill her.

“You would probably expect this kind of thing to happen in Russia,” he said, “where people get bumped off and you don’t know why they get bumped off,” he said.

Rep. Markwayne Mullin (R-Okla.) said Jan. 7 that he witnessed the shooting. He told ABC News that “when they broke the glass in the back [of the House chamber], the lieutenant that was there … didn’t have a choice at that time.”

“The mob was going to come through the door,” Rep. Mullin said less than 24 hours after Babbitt’s death. “There was a lot of members and staff that were in danger at the time. … His actions I believe saved people’s lives even more. Unfortunately it took one, though.”

Rep. Mullin’s spokeswoman, Meredith Blanford, did not respond to multiple emailed questions about the lieutenant’s identity and why it has not been released.

Babbitt, named Ashli McEntee before her 2019 divorce, served on active duty in the U.S. Air Force for four years beginning in April 2004 and became a reservist in October 2008, according to the Department of Defense. She joined the Air National Guard in July 2010 and honorably left military service in November 2016.