After his first address to sitting lawmakers, critics called the president’s agenda a pipe dream. 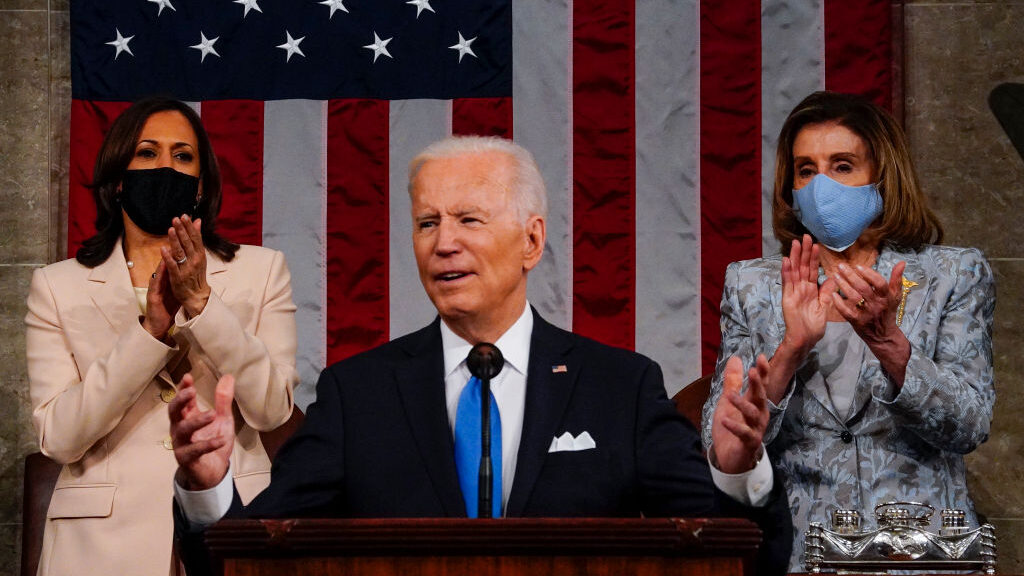 President Joseph R. Biden Jr. unveiled his proposal to help American families while laying out his administration’s priorities and accomplishments on Wednesday night in his first address to a limited joint session of Congress.

Just a day shy of his 100th in office, Biden used his speech as an appeal to the American people to restore their confidence in government as a force for good. He also called on Congress to act on gun violence, immigration reform, protections for LGBTQ Americans and voting rights.

The president’s Republican opponents said he was he pitching unrealistic spending measures and exaggerating achievements, while some progressive allies called for him to do more.

At the core of the Biden’s address was his $1.8 trillion American Families Plan, the third package costing more than $1 trillion that he has presented to Congress.

“[Chinese President Xi Jinping] and others, autocrats, think that democracy can’t compete in the 21st century with autocracies. It takes too long to get consensus. To win that competition of the future, in my view, we also need to make a once-in-a-generation investment in our families and our children,” Biden said. “That is why I have introduced the American Families Plan tonight, which addresses four of the biggest challenges facing American families. The first is a good education.”

To pay for the plan, Biden is asking for $1 trillion in new spending over 10 years and $800 billion in tax breaks, promising that the expenditure will be entirely offset by new revenue generated by increasing personal taxes on the rich, cracking down on tax loopholes and raising the corporate tax rate from 21 percent to 28 percent.

“I believe what I propose is fair, fiscally responsible, and it will create millions of jobs that will grow the economy and enhance our financial standing in the country,” Biden said.

The proposal, part of the “Build Back Better” agenda he promoted on the campaign trail, aims to improve the country’s education system.

In addition to extending child tax credits by up to $3,600 a year through 2025, expanding access to child care and increasing Pell grants, the centerpiece of the plan offers four more years of free education to all Americans, including two years of community college and two years of universal preschool.

It also calls for providing accessible and affordable child care and up to 12 weeks of paid family and medical leave.

Missing from his proposal are several progressive campaign promises, including lowering the cost of prescription drugs, expanding Medicare eligibility and increasing the estate tax from 40 percent to 45 percent. Instead, he urged Congress to take action on such issues.

Biden also promoted his American Jobs Plan, a $2.25 trillion proposal that focuses on creating millions of jobs to rebuild physical infrastructure and provide what the White House has coined “human infrastructure,” such as health care and caregivers.

He announced that Vice President Kamala D. Harris will lead this effort.

“These are good paying jobs that can’t be outsourced,” he said. “Ninety percent of the infrastructure jobs created in the American Jobs Plan do not require a college degree. Seventy-five percent don’t require an associate’s degree. The American Jobs Plan is a blue-collar blueprint to build America. That is what it is.”

Speaking to a scaled-down group of lawmakers due to coronavirus restrictions at a Capitol building that remains under heavy security following the Jan. 6 insurrection, Biden provided a rundown of the federal government’s efforts to combat the global pandemic.

He said that the country has surpassed a goal of administering 200 million doses of COVID-19 vaccines during his first 100 days in office. He also touted the American Rescue Plan Act, a $1.9 trillion economic relief bill he signed into law that provided $1,400 direct payments to many Americans, increased funding for small businesses and expanded unemployment benefits.

On the heels of a guilty verdict for former Minneapolis police officer Derek Chauvin in the murder of George Floyd, the president pushed Congress to pass the George Floyd Justice in Policing Act by the one-year anniversary of Floyd’s death next month.

The bill, which the House passed in March, has yet to be taken up in the Senate, where it would likely need 60 votes in favor to overcome the filibuster. The legislation calls for a series of federal police reform measures, including banning choke holds, outlawing no-knock warrants in federal drug cases, ending qualified immunity for officers, prohibiting racial and religious profiling, creating a national police misconduct database, limiting police militarization and enhancing “pattern and practice” investigations into police departments.

“We have all seen the knee of justice on the neck of black Americans,” the president said. “Now is the opportunity to make real progress.”

Following Biden’s address, Republicans were quick to criticize it as “boring but radical,” knocking his proposals for being full of “Washington schemes” and “socialist dreams.”

“Democrats want a partisan wish list. They won’t even build bridges to build bridges. … It’s a liberal wish list of big government waste, plus the biggest job-killing tax hikes in a generation,” Sen. Tim Scott (R-S.C.) said as he delivered the GOP’s rebuttal. “Tonight, we also heard about a so-called ‘family plan.’ Even more taxing, even more spending to put Washington even more in your life — from the cradle to college.”

“Joe Biden talks about unity and bipartisanship. He promised it at his inauguration too,” House Republican Whip Steve Scalise (R-La.) said. “But actions speak louder than words. And he governs like a radical and caves to his left-wing base at every turn. He’s not fooling anyone.”

“This represents the largest tax-and-spend agenda since the 1960s and would mark an unhealthy shift towards concentrating economic and political power in Washington, D.C.,” Ditch said. “The consequences of the plan are frightening: huge tax hikes on private investment just as the economy is starting to recover from the pandemic and adding trillions more to a national debt that is already over $225,000 per household.”

“This would be for the sake of expanding the welfare state and providing handouts to an array of left-wing groups and causes. Contrary to media coverage, it is a profoundly radical agenda which goes against the principles that made America the greatest nation on earth.”

While centrist Democrats applauded the president’s speech and progress during his first 100 days in office, some progressives panned his omission of certain campaign promises.

“The president painted a portrait of how his administration has made extraordinary progress for the people,” said House Speaker Nancy Pelosi (D-Calif.), who, along with Harris, made history as the first two women to sit on the dais behind the president during a congressional address.

“President Biden’s address laid out an ambitious, transformative vision for seizing this once-in-a-century opportunity for our economy to Build Back Better,” she said.

“Squad” member Rep. Ilhan Omar (D-Minn.) pointed out that Biden called health care a “right” while promoting the Obamacare exchange rather than embracing Medicare for All.

“If you say you believe health care is a right and not a privilege, then support Medicare 4 All,” she tweeted.

Progressive advocacy groups also expressed some disappointment in the omissions in Biden’s agenda.

Sharon Parrott, president of the Center on Budget and Policy Priorities, called his list of priorities “groundbreaking” but said that his proposals have “shortcomings.”

“President Biden’s recovery proposals — including both the American Jobs Plan and American Families Plan — constitute a groundbreaking agenda to move us toward an equitable economy and address problems that have plagued our nation for decades,” Parrott said.

“Despite the agenda’s far-reaching impact, Congress will need to address shortcomings in certain areas, like rental assistance and making the full Child Tax Credit expansion permanent, and fill in many details in others.”

“Biden promised to increase benefit rates for Supplemental Security Income (a main means-tested income benefit for people with disabilities) and make various other improvements to both SSI and Social Security Disability Insurance, but nothing on those in the American Families Plan,” Fremstad said.

With years of his four-year term still to go, the president asked lawmakers across the political spectrum to work with him to keep the United States “on the move.”

“My fellow Americans, we have to show not just that we are back, but we are back to stay,” he said. “If you don’t like my plan, let’s at least pass what we all agree on.”

«Previous Post
Census Triggers Shift In Congressional Seats, And Some States Are Gearing Up For A Fight»Next Post
US Capitol Police To Be Sued For $10 Million For Killing Unarmed Rioter