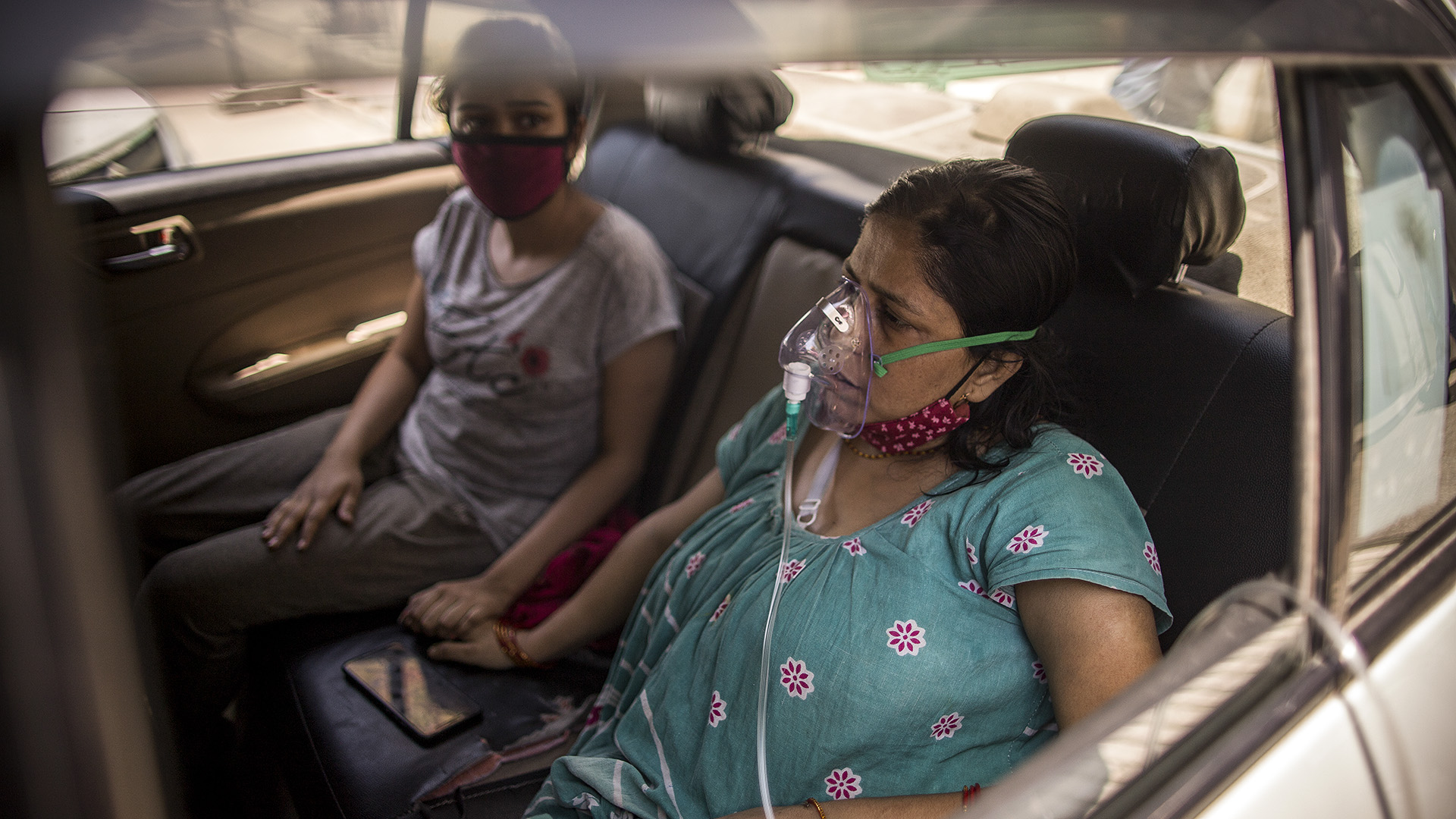 Patients who are infected with Covid-19 coronavirus can be seen wearing Oxygen masks as free Oxygen was supplied as a part of public service for the people in need in New Delhi, India. (Anindito Mukherjee/Getty Images)

KOLKATA, India — “I took the vaccine and after some time felt dizzy,” Anarkali, a 70-year-old woman who went to take a Covid-19 jab at a government hospital in western Uttar Pradesh’s Shamli district, said.

“Later, I was told that I had been injected with anti-rabies vaccine instead.” The ‘mistake’ was repeated — thrice — and none of the women were asked for their identification cards or any other proofs for mandatory verification.

Jasjit Kaur, the district magistrate of Shamli, confirmed the incident and said the pharmacist was “suspended” and the medical superintendent “warned.”

This incident happened earlier in April when the Covid-19 situation in India was beginning to get worse. Three weeks later, the single-day count of new infections crossed 350,000 on April 25.

Four lost their lives in a fire at Well Treat Multispeciality Hospital in Nagpur in Maharashtra — the western Indian state worst affected by Covid-19. Twenty-seven patients had to be shifted to another facility. The hospital refused to comment in this regard despite multiple attempts. Cabinet ministers tweeted their condolences.

The state saw another similar incident a month earlier. A fire broke out at the Sunrise Hospital in the Bhandup area of Mumbai. Nine died in this inferno. The hospital, situated on the top floor of the four-story mall, was treating 76 patients, mostly for Covid-19. The office of Prime Minister Narendra Modi tweeted it was “pained by the loss of lives.”.

A fire broke out in Ayush Hospital, located on the fifth floor of a multi-story building in western state Gujarat’s Surat, on April 25. Some critical Covid patients escaped, while four succumbed. “The fire broke out after a blast in the air conditioner caused either due to the short circuit or overloading,” Basant Pareek, in-charge Chief Fire Officer of Surat Municipal Commission, said.

To tackle the lack of beds for Covid-19 patients in Ahmedabad, the Gujarat government came up with a solution.

“In an unprecedented initiative, Gujarat government to convert Gujarat University Convention-cum-Exhibition Centre at GMDC Ground in Ahmedabad into a fully equipped 900-bed dedicated Covid Care Hospital with 150 ICU beds with ventilators in two weeks,” tweeted the official account of chief minister office, the government of Gujarat, on April 13.

Under a load of patients, many places have been converted to Covid facilities which were not built for purpose.

“As a layman, even we can see gaps with closed fire exits and stairways, which have no access, equipment that doesn’t work [at many makeshift places people are being treated in],” Sumeet Shah, director of metabolic/bariatric surgery in New Delhi’s PSRI Hospital, said. “Maybe, they need stricter and more frequent fire audits.”

Maharashtra Chief Secretary Sitaram Kunte, on April 23, directed the district administrations in the state to conduct fire and oxygen audits of all hospitals, including private units, across the state.

A similar audit carried out by the Brihanmumbai Municipal Corporation — Mumbai’s civic governing body — recently found that of the 1,178 health facilities, nearly 762 were not complying with fire audit norms. In December 2020, the Supreme Court had directed all states to carry out mandatory fire audits.

At the eastern state of Patna, people were seen pushing a van carrying Covid vaccines.

“89,689 vials [containing 10 doses each] were being transported in this van,” Mukesh Kumar, pharmacist, accompanying the van, told Zenger News.

“We will be taking it to the storage center at Nalanda Medical College Hospital.” By the time the vehicle could be moved with the help of locals, the incident became viral on the internet.

On April 14, Vinod Singh, a retired soldier suffering from Covid-19, died without treatment as the Nalanda Medical College Hospital’s officials were “busy preparing for the visit of Mangal Pandey, Bihar’s health minister,” according to his son Abhimanyu Kumar.

Singh, a resident of Lakhisarai that is 136 kilometers (85 miles) from Patna, was referred to the All India Institute of Medical Sciences in Patna, but they could not admit Singh. “We then requested the Nalanda Medical College Hospital, but the authorities did not pay heed,” the son said.

The situation gets grimmer when multiple members of the same family fall prey to the virus.

“Eleven members in our family — four brothers, their wives, 2 children, and one grandmother — tested positive for coronavirus on April 7,” Kunal Dutt, a resident of Patna, told Zenger News.

“The number reduced to 10 six days later — not because someone recovered, but because one of them lost his life. There was no hospital bed available for us.” Dutt’s family stayed in Patna and visited Khagaul, a small town near Patna, for a “holi function.”

“I think nobody anticipated such a massive rise in the cases,” Tanushree Kumar, junior resident doctor, King George’s Medical University, Lucknow, told Zenger News. “That’s why there is a shortage of vaccines.”

She said injecting the wrong vaccine in Shamli might have happened by mistake. “Or, there was a communication gap. Health workers are overworked, so naturally, their efficiency would decrease.”

“We need to understand that health is a state subject, but from the very beginning of the Covid-19 crisis, everything from vaccination, testing, isolation centers, all guidelines were given by the center,” Bhatti said. “They hijacked the whole information system around this. Therefore, now, when the crisis has worsened, they are to be blamed.”

“The government should have built bigger isolation facilities, proper oxygen plants. Of 100 patients, 80 don’t require oxygen, but we are unable to provide treatment to even the 20.”

“Our whole healthcare system is busy focusing on just one disease. We have denied admission patients coming with other diseases. Still, we are unable to tackle this virus.”

Different districts may have different consumption patterns, according to Sonia Khatter, professor of microbiology, ESI Postgraduate Institute of Medical Sciences and Research.

“Maybe, in districts with lesser consumption, vaccine doses are getting wasted or getting expired by lying in an under-utilized cold chain point,” Khatter told Zenger News. “I feel with better planning, prioritization; this can be taken care of.”

India’s top court has asked the central government for a national plan by April 23 on bolstering supply, oxygen, medicine, treatment, and vaccines.

Doctors, who have been raging war against the deadly disease non-stop, believe that apart from the government’s failure to keep a check and the mismanagement at the hospitals, people, who started socializing and celebrating festivals, are also to blame.

“Unnecessary socializing needs to be stopped at any cost,” Khatter said. “The public, too, has to own responsibility.”

«Previous Post
Panda Cub Wrestles With Its Mother  »Next Post
Jason Henderson Is A Warrior Of Hope, Insisting ‘Love Reaches Out’