Jason Henderson Is A Warrior Of Hope, Insisting ‘Love Reaches Out’ 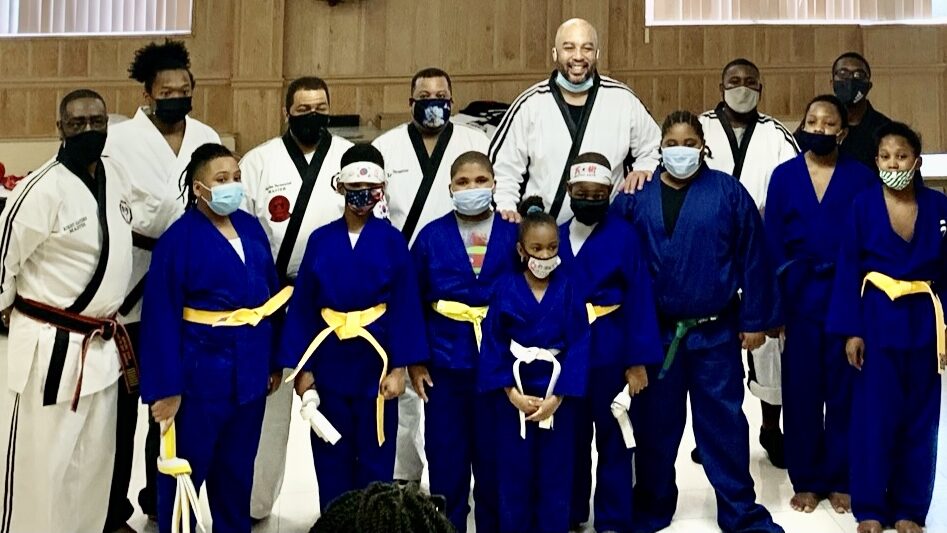 Jason Henderson gives back to his community through leading a martial arts program for people with autism. (Courtesy of Jason Henderson)

WASHINGTON — As a 20-year physical therapist in Washington, D.C., Jason Henderson has worked with many disabled people.

But there is another reason why shaking Henderson’s hand feels like squeezing a brick. In a Southeast Washington church, twice a week, Henderson becomes the Sensei for a group of young men.

There, he uses martial arts to help them cope with autism.

“Love reaches out. My love reaches out!” sang Henderson during a recent demonstration he held with some of his students. “I play that song because it is featured in my new film about how martial arts can benefit kids with autism. And how important it is for me, as the CEO of a health-care company, to give back to the community.”

Henderson’s documentary, “I AM A Martial Autist,” was previewed on Oscar night in a virtual event.

Henderson is president of Ergo Solutions, located in the capital, but much of his work is devoted to the young men who have lost their lives to gun violence. His techniques give them nonviolent alternatives to conflicts.

“It is important for our community to reach out and share love,” Henderson said. “Every beautiful black child in here deserves our love. So when we see kids being diagnosed, called dumb, called stupid, call retarded, the community has to change the way we see our babies.”

“Martial arts accepts you for who you are,” and that has been a blessing for six of Henderson’s students. They snapped to attention at their sensei’s commands as he took them through their martial-arts warm-up routine.

Born in Philadelphia, Henderson graduated from high school and was admitted to Florida A&M, where he earned his degree in physical therapy. He earned a doctorate in PT from Alabama State and then an MBA from the University of Maryland University College.

“When I got out of high school, I didn’t know what I wanted to be, where I wanted to go, so I headed South,” said Henderson. “While many big schools accepted me, I got a track scholarship to Florida A&M.

“My focus is to continue to fight health disparities through my practice and to develop this martial program for children and young adults in person and at home with our online program, which was developed during the pandemic.”

In addition to his medical and martial programs, Henderson has published a book, “A complete 180,” about business executives putting their companies back on track after disappointments.

“In my life, I had to restructure my health-care company. There is no difference between what I had to do and parent who has autism,” Henderson said. “There are times in life you have to redirect things. Sometimes, we get off course, and God is there to redirect us.”