Diversity Wins At The Oscars, But Few U.S. Latinos Nominated 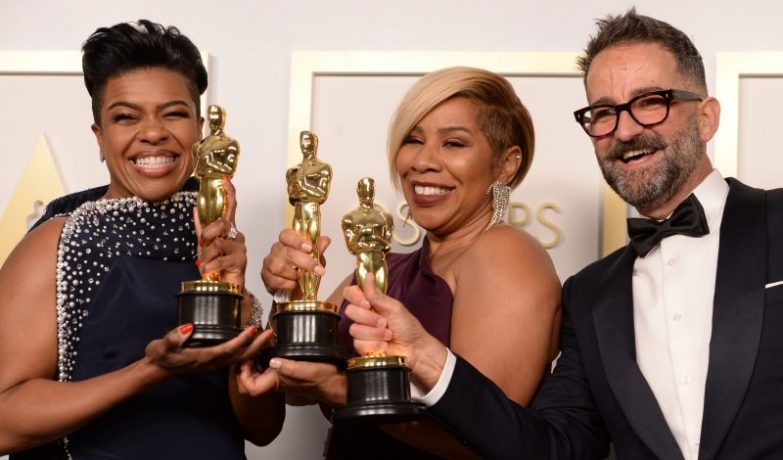 Mia Neal, Kamika Wilson and Sergio Lopez-Rivera made history as the first African-Americans and the first Latino to win an Oscar for Hair and Make-Up. (ABC)

The 93rd Academy Awards will go down in history for various reasons.

It was the first partially virtual Oscar telecast. There was a record number of nominations and wins for the black community. Asians and Asian-Americans working in front and behind the camera won awards. However, missing in the diversity Oscar equation in most categories were U.S. Latinos.

The presence of Asians and Asian-Americans was substantial this year, with many firsts.

Chloé Zhao, director of “Nomadland,” made history as the first Asian woman and the second woman in the world to win the Best Directing award in nearly 100 years.

Riz Ahmed now holds the distinction of being the first Muslim to be nominated for an Oscar. His work as a lead actor in “Sound of Metal” earned him this distinction.

Oscar wins for Latinos came in the behind-the-camera categories, where they were part of creative teams.

Carlos Cortés shared the win for the Oscar in sound for “Sound of Metal.” The team also included Jaime Baksht, Phillip Bladh and Michelle Couttolenc.

Sergio Lopez-Rivera, Viola Davis’ personal make-up artist, received an Oscar for Best Make-up, the first Latino to do so. His two partners, Mia Neal and Jamika Wilson, also became the first African Americans to win the Oscar for their work as hairstylists for “Ma’ Rainey’s Black Bottom.”

“We look forward to the time when these questions [of diversity] are moot,” Lopez-Rivera said when fielding questions about diversity.

Although nominated, there was no win for “El agente topo” (“The Mole Agent”), the documentary from Chile.

There were only two Latino presenters.

EGOT (Emmy, Grammy, Oscar, and Tony) actress Rita Moreno introduced the Best Picture Oscar, which went to the producers of “Nomadland.” Oscar-winning actor Joaquin Phoenix, who many don’t know was born in Puerto Rico, presented the lead actor and actress award at the end of the show. The statuettes were for Anthony Hopkins for Best Actor in “The Father” and Francis McDormand for Best Actress in “Nomadland.”

It was an unusual night at the Academy Awards.

For the first time, the Oscars aired from various venues, the Dolby Theatre at Hollywood & Highland Center and international locations via satellite. The usual star-studded event did not have as many A-list actors in attendance. However, the audience got a glimpse of designer gowns as the stars walked the red carpet, still following safe distancing as required. Instead of an orchestra and dance numbers, celebrity DJ Questlove “scratched” the audience off. Sadly, what was all too familiar was the scant presence of U.S. Latinos on the Oscar nomination ballot.

The post Diversity Wins at the Oscars But Not Inclusive of U.S. Latinos first appeared on LatinHeat Entertainment.