Chad’s leader died of wounds sustained in clashes between insurgents and his soldiers shortly after claiming re-election victory. 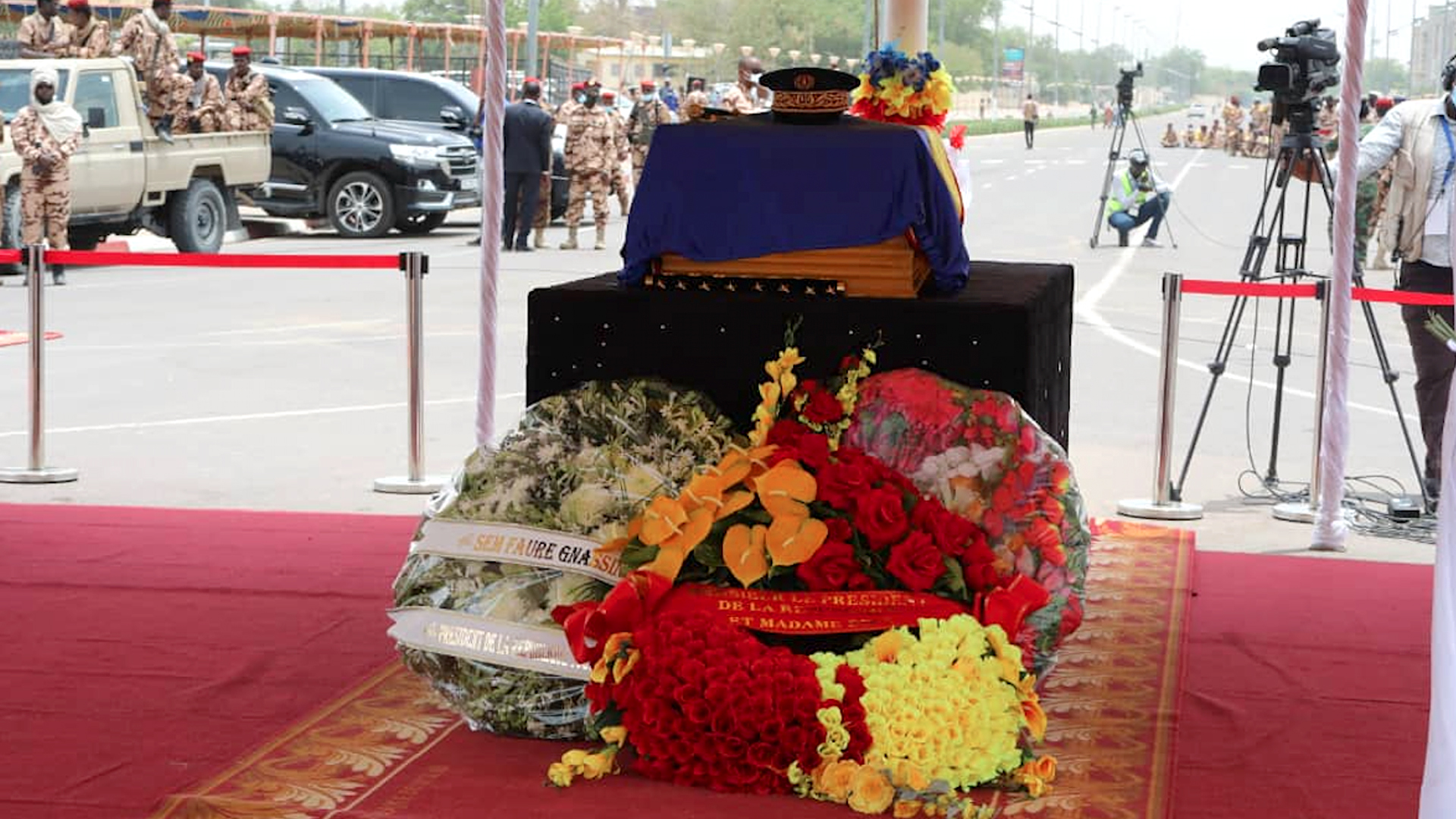 YAOUNDÉ, Cameroon — Anxiety has gripped the Sahel region as the stalwart French ally in the fight against jihadist insurgencies in the area, Chad President Idriss Déby Itno was buried in the country’s capital, N’Djamena, on April 23.

President Déby died on April 20 of wounds he sustained while leading his troops against a rebel offensive.

French President Emmanuel Macron and several African heads of states braved rebel threats to attend the ceremony. The French leader said his country would stand by her former colony, Chad.

“France will not let anybody question or threaten, today or tomorrow, Chad’s stability and territorial integrity,” Macron said.

“Stability, inclusiveness, dialogue, and democratic transition – this is what we want. We are by your side. The people of the region enjoy a peace pact with France. We have to make sure the pact lives on, and that of liberty and independence,” he said. 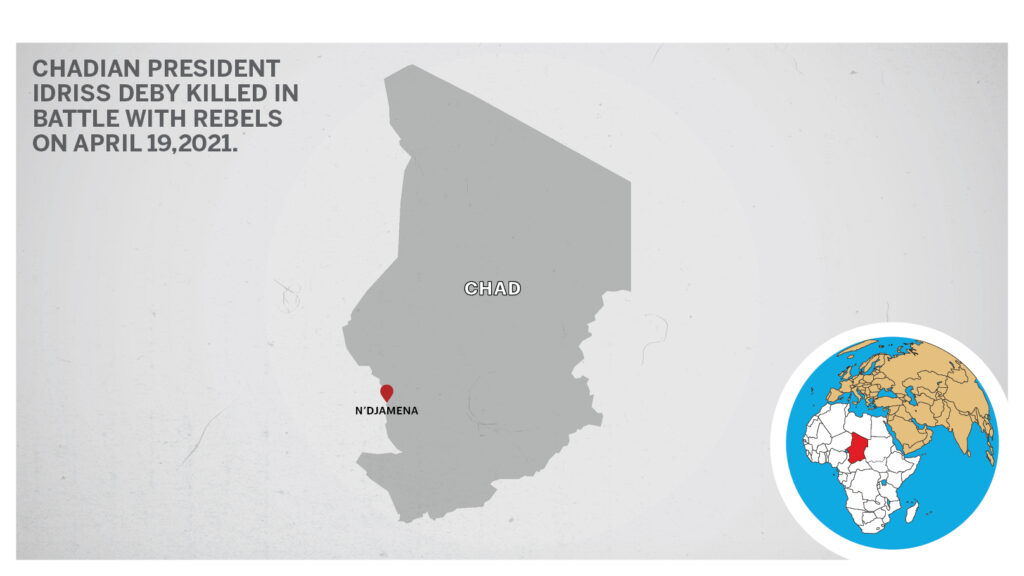 A dusk to dawn curfew and 14-day national mourning were announced in the wake of the President’s death.

He was killed hours after the April 11 presidential election provisional results showed he was heading for a sixth term to extend his 30-year rule.

The parliament has been dissolved, and the government replaced by an 18-month transitional military council headed by Déby’s 37-year-old son, Mahamat Kaka, a four-star General. He will take over as president in place of his father, according to a charter released on Apr.21.

Kaka oversaw his father’s security as the head of the elite presidential guard and had often appeared alongside him. He was a deputy commander of the Chadian forces assisting a United Nations peacekeeping mission in the restive north of neighboring Mali.

On Monday, April 26, he surprised many Chadians by appointing his father’s ally-turned-political-nemesis, Albert Pahimi Padacke, as interim prime minister.

Padacke, who was prime minister from 2016 to 2018, ran against Deby several times, the latest being the April poll in which he came second.

Opposition leaders have strongly condemned Kaka’s elevation and Padacke’s nomination.
Kamissa Camara, a senior visiting expert for the Sahel at the U.S. Institute of Peace, said the appointment of Mahamat Kaka is tantamount to a “coup.”

“The constitution clearly says that in case of impeachment or demise of the President, the Speaker of the House should take over,” Camara said.

“Obviously, his son is not the Speaker of the House, so this is a de-facto coup d’etat. The constitution has been suspended. The government has been dissolved. The parliament has been dissolved as well. So, this is definitely considered a coup. Chad has been playing a key role in stabilization efforts of the Sahel region, but also of the Lake Chad basin,” she said.

Her sentiments were echoed by Delphine Djiraibe, a human rights lawyer in N’Djamena.

The army said the 68-year-old President had been commanding his army at the weekend as it fought insurgents who launched a major incursion into the north of the country from Libya on election day on Apr.11.

“The news that President Déby was killed was shocking because there was actually no news about him being in the field combating the rebels. So, there are a lot of questions that have remained unanswered,” said Camara.

The late President took 79.3 percent of the vote, according to provisional results released by the country’s electoral body, in an election that top opposition leaders boycotted.

The president campaigned on a platform of restoring peace and security, but the rebel incursion thwarted his promises.

Founded in 2016 by disillusioned former army officers, the rebel group Front for Change and Concord in Chad, known by the French language acronym FACT, accused the late President’s regime of repression in events leading to the election.

The rebels, based across the northern frontier in Libya, attacked a border post on election day before advancing hundreds of kilometers south across the desert.

President Déby postponed his victory speech, instead choosing to visit Chadian soldiers on the front lines, according to his campaign manager, Mahamat Zen Bada.

Regarded as a close ally of the Western powers battling Islamist militants in the Sahel and central Africa, Déby was one of Africa’s longest-serving leaders, having taken power in 1990 by toppling Hissene Habré.

Ordinary Chadians have been trying to digest the news of the death of a man who was said to be in good health, having attended the investiture of Congo’s President Denis Sassou Nguesso just four days before his untimely death, in the country’s capital, Brazzaville.

“I am very moved and surprised to learn the news of his death,” Alex Beramgoto, a Chadian based in the capital, N’Djamena, told Zenger News.

“At the minute, I did not believe this information, but later I was convinced,” he said. “I want everything to be done according to the rule of law.”

Another N’Djamena resident, Mahamat Adamou, described how people are “at a loss seeing the rebels advance. What is their program? What will happen to the capital if they seize power?”

In 2018, parliament passed a controversial change to the constitution that would have allowed Déby to stay in power until 2033.

Experts have long feared that the fall of Chad could plunge the volatile Sahel and Central African regions into deep crisis.

Chadian soldiers are involved in the United Nations Multidimensional Integrated Stabilization Mission in Mali (MINUSMA). They have also been involved in the G-5 Sahel, a regional military organization made up of five Sahelian countries to fight terrorism in the region.

“Chadian forces are considered the best trained in the entire region,” said Camara. “I am also looking at Chad’s involvement in the stabilization effort in Darfur in its eastern border, but also the Central African Republic and Boko Haram.”

“When Gadaffi (Muammar Gaddafi, former Libyan President) fell in 2011, we had no idea what the consequences would be for the Sahel region. Up until today, we are still facing the consequences of Gadaffi’s demise. This is bigger than Gadaffi’s removal,” she said.

Djiraibe expressed fears the present chaos may only worsen the situation for Chadians.

Chad is the fourth least-developed country globally, ranking 186th out of 189 countries in the 2018 Human Development Index. The country became an oil producer in 2003, with the completion of a $4billion pipeline linking its oilfields to terminals on the Atlantic coast.