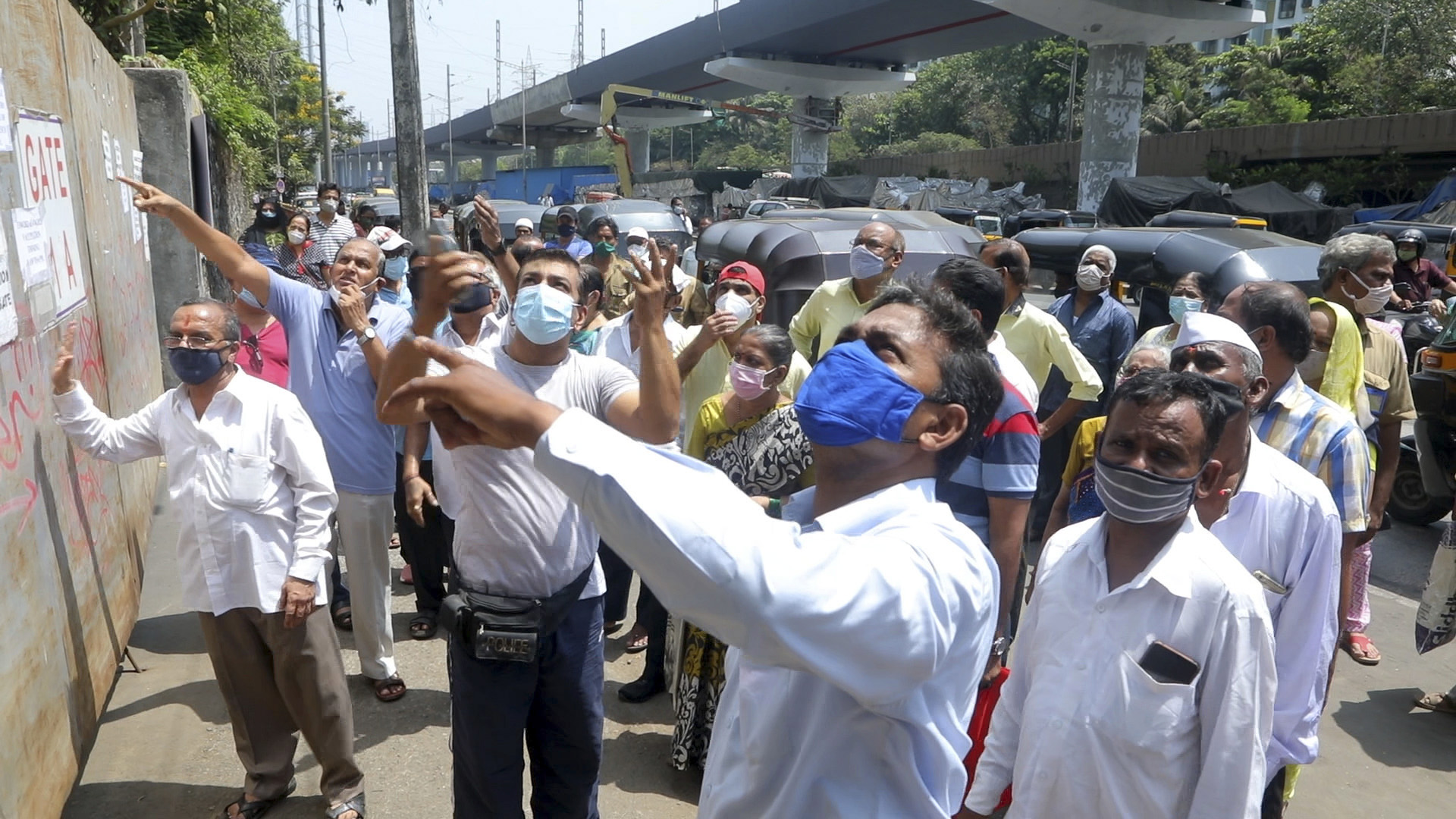 Citizens plead helplessly with the authorities at a vaccination center in Mumbai to give them jabs. (Subhash Sharma)

This trending social media feed sums up the current Covid-19 situation India is facing, with the single-day count of new infections crossing 350,000 on April 26. The country had surpassed the 297,000 cases per day recorded in the U.S. in January days ago.

Television and social media feeds are overwhelmed with pictures and videos of non-stop funerals, grieving relatives, queues of ambulances carrying gasping patients waiting for hours to secure a bed, mortuaries overflowing with dead bodies, and patients, sometimes two to a bed, in corridors and lobbies of hospitals.

There are frantic calls for help — for beds, medicines, oxygen, essential drugs, and tests. Lifesaving drugs for Covid are being sold on the black market, and test results are taking days.

This sudden ‘second wave’ has caught India off guard, and many Indians are beginning to lose hope of an early return to normalcy. From May 1, everyone above the age of 18 will be eligible to get a vaccine against Covid-19 in the country. But questions remain on whether enough vaccine stocks will be available to cater to the demand.

When the vaccination drive began on Jan. 16, the government planned to inoculate 300 million citizens or about a third of its population by August. But as of April 23, only 9 percent had one dose, and 2 percent were fully inoculated.

Several states in India have had to slow down their vaccine rollout due to scarcity.

Alarmed at the situation, people have been lining up at vaccination centers. Hundreds gathered at one such center in Mumbai’s posh Goregaon locality recently. Panicked citizens started banging on the closed metal doors of the NESCO jumbo vaccination center, seeking immediate attention from the authorities inside.

One of them was 62-year-old Vijay Sawant, who had come with his wife to get a jab.

“They are saying that they don’t have vaccines,” Sawant told Zenger News. “The vaccine stock is over. We are in a lot of trouble.”

His sentiment was echoed by another citizen Babulal Shah.

“When we registered [for the vaccine], we were told that they have vaccines, so we came,” Shah, a 51-year-old, told Zenger News. “Now, they say they don’t have.”

In January and February, India had emerged as a vaccine exporter to the world with images of consignments leaving Indian airports to far-off countries like Ghana and Ivory Coast under the COVAX scheme.

The COVAX program, backed by the WHO and Gavi vaccine alliance, aims at equitable vaccine access worldwide and is relying heavily on supplies from India. Gavi says while it is looking for more suppliers, much still depended on India’s vaccine makers.

This month, India has only exported around 1.72 million vaccine doses. That compares with almost 50 million doses shipped abroad between late January and March, according to data from the ministry of external affairs.

India has placed a temporary hold on all exports of the Covishield, the Oxford-AstraZeneca coronavirus vaccine. India’s battle to contain the pandemic is likely to hit vaccination campaigns in more than 60 poorer countries, mainly in Africa, for months.

“The United States is working around the clock to deploy available resources and supplies,” a statement from the White House states. “The United States has identified sources of specific raw material urgently required for Indian manufacture of the Covishield vaccine that will immediately be made available for India.”

At the beginning of February, India appeared to have had the virus under control. Daily cases were barely more than 10,000 a day — considered low for a country of 1.35 billion people. Indian health minister Harsh Vardhan had said in early March that the country had entered the “endgame” of the virus.

But in April, the numbers spiked. This ‘Covid tsunami’ was fueled by people letting their guard down, attending weddings and social gatherings, and the government allowing religious gatherings like the Kumbh Mela and Holi.

At the end of February, India’s Election Commission announced elections in five states having 186 million voters. Campaigning began in full swing, with no safety protocols and social distancing.

Even as the country ramped up the vaccination drive and administered more than 100 million doses by last week, heavy vaccine shortages were being reported. Serum Institute of India, the world’s biggest vaccine maker, said it would not be able to ramp up supplies before June because it didn’t have enough money to expand capacity.

The government has now announced INR 4,500 crore ($6,01,496) to boost production of the Covishield and Covaxin vaccines. Serum Institute of India said it had “borrowed from banks to begin ramp-up of its vaccine immediately instead of waiting for the government’s aid to arrive”.

India’s other vaccine supplier, Bharat Biotech, only has a minuscule production capacity of Covaxin.

India has also allowed imports of vaccines from pharma majors like Pfizer, Moderna, and Russia’s Sputnik V. But imports will take a couple of months to arrive.

Also, the discovery of a new variant of Covid-19 in India has caused widespread concern and has been blamed as one of the main factors driving the wave of cases.

The deteriorating Covid situation has been further amplified, for, in addition to the shortage of vaccines, hospitals have started facing a shortage of oxygen.

On April 21, hospitals across Delhi, the capital city of India, started flashing SOS messages on Twitter. Messages like “We have oxygen stock left for only 2 hours, 350 patients on oxygen beds at risk” were put out.

Authorities got a sense of the enormity when several prominent Delhi hospitals started tweeting SOS messages one after another. The Delhi High Court had to intervene to restore the supply to Delhi hospitals.

“People should not panic because our authorities, our municipal commissioner, our chief minister all are working on getting oxygen on a very high level,” Neelam Andrade, the dean of NESCO jumbo vaccination center, told Zenger News.

The home ministry is coordinating the lifting of high-capacity tankers from abroad, including Singapore and the U.A.E. by Indian Air Force transport planes. The defense ministry has also decided to airlift 23 mobile oxygen generation plants from Germany.

“Everyone has proven that the Covid situation has failed,” a resident of Mumbai’s affluent suburb Borivali who goes by the name of Aniket told Zenger News.