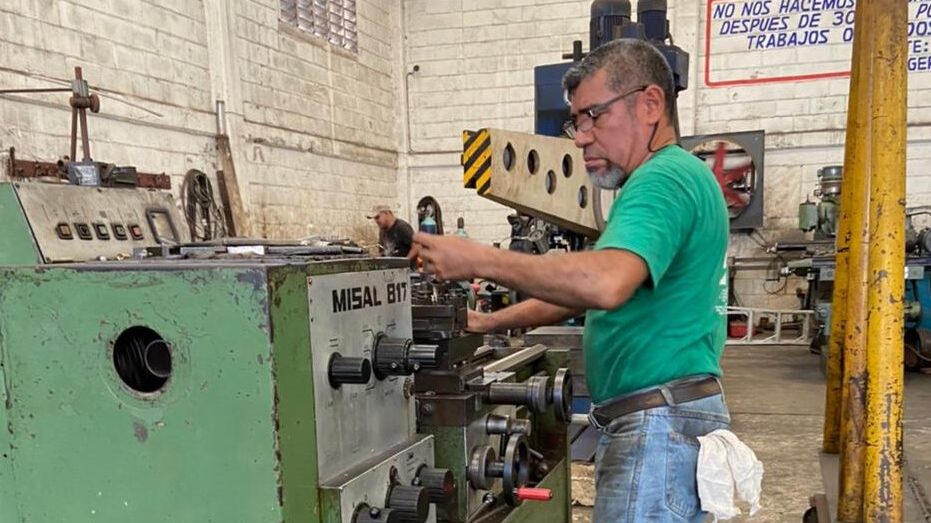 Genaro de Jesús Álvarez is proud to be part of the family that runs a machinery and tools business. (Christian Valera Rebolledo/Café Words)

Family businesses represent a traditional aspect of Mexico that endures. These businesses, year after year, pass from generation to generation. Some are even part of the international market, such as Grupo Carso, Bimbo, and Televisa.

However, many success stories, less well-known, operate on a smaller scale.

Consider the Álvarez family company, headed now by Genaro de Jesús, who, thanks to his skill with machines and tools, as well as support from his siblings, has taken over his father’s mechanical workshop. So far, three generations have worked here.

“We have dedicated ourselves to the manufacture and reconstruction of heavy machineries, such as excavators, backhoes, front loaders, water tanks, as well as stone-crusher equipment,” he said.

The history of the Álvarez Hermanos workshop began on April 2, 1979. Tired of his daily routine, Don José Álvarez Rojas, father of Genaro de Jesus, quit his job and decided to start his own business, using the knowledge he had amassed in previous jobs.

“My father was an entrepreneur and visionary at the same time,” said de Jesús. “He taught me all he knew, and I specialized with the corresponding studies to be able to continue my father’s efforts. So far, we have been working for 41 years.”

“It has not been easy,” said Genaro Álvarez. “It has required a lot of effort, dedication and sacrifice. One must always continue to modernize, have state-of-the-art machinery and equipment, and keep up with the latest techniques.”

Family businesses are one of the main backbones of Mexico’s economic structure. It represents about 70 percent to 90 percent of the country’s companies.

The ideal of any family business is that it remains in the family’s hands, throughout the generations, a transition the Álvarez Hermanos workshop is now experiencing.

“I have put my whole life in this business, and maintaining it has not been easy. Fortunately, my three children have taken it upon themselves to carry it,” he said. “I retired a few years ago, but I have not stopped coming to see them and helping them as much as I can. I am extremely proud of what we have achieved.”