The 140-foot monument is taller than Rio de Janeiro’s Christ the Redeemer, and people will be able to go inside it. 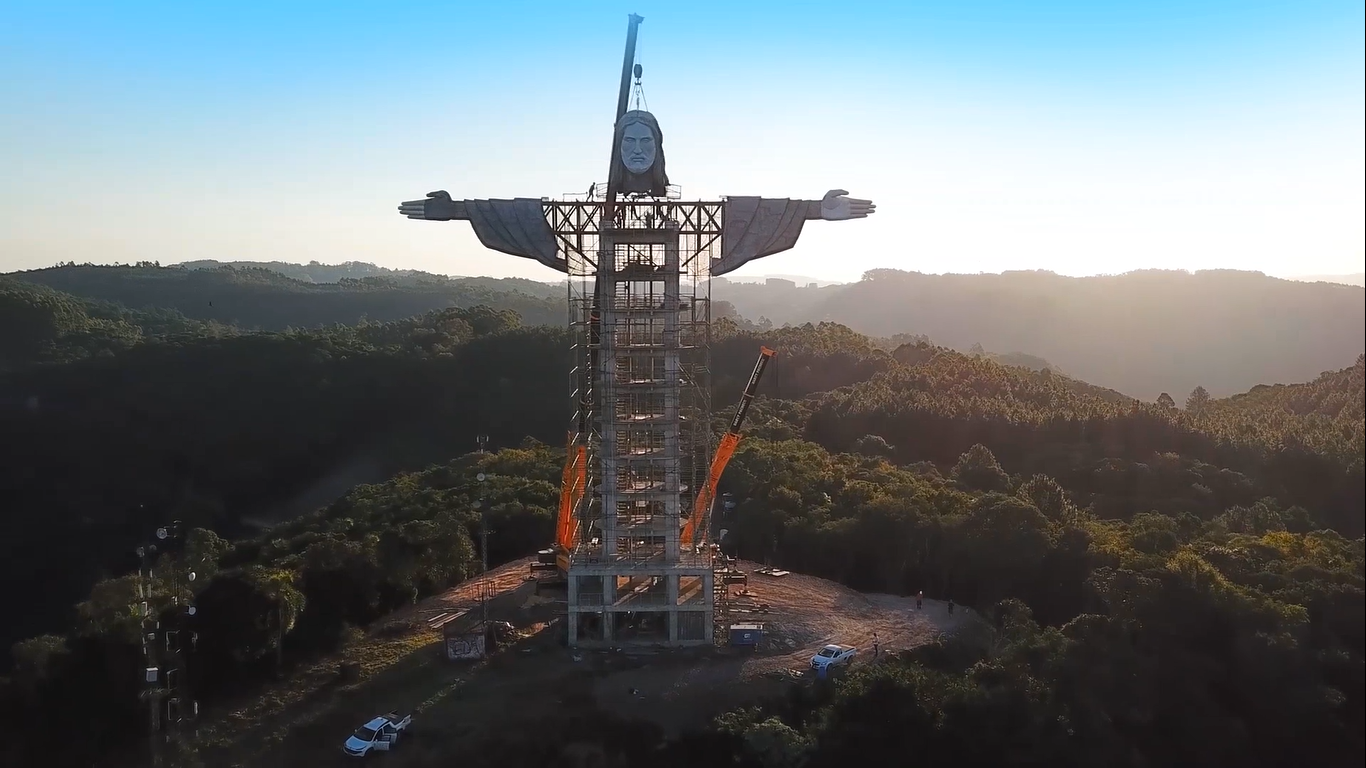 The construction of the sculpture began in July 2019. The ribbon-cutting ceremony will take place in December 2021. (Konce Agência)

PORTO ALEGRE, Brazil — There is a new Christ statue in Brazil, and it is bigger than the one in Rio de Janeiro.

In southern Brazil, the community of Encantado, 89 miles (143 kilometers) from Porto Alegre, baptized it as Christ the Protector. The statue already stands with open arms facing the Taquari Valley.

With mountains, native forests, waterfalls and rivers, the valley has grandiose landscapes. About 23,000 people live in the municipality, which hosts numerous companies that produce and export yerba mate, sausages, as well as hygiene and cleaning products. Now, with the image of Christ, the population expects the tourism industry to grow.

The sculpture’s construction began in July 2019, and few details are missing to complete the work. The community decided to place it atop the Morro das Antenas, 1,300 feet above sea level. Future visitors will have a complete view of the valley, the Garibaldi Lagoon and the Taquari River from the sculpture.

Encantado’s residents, including business owners and merchants, already wanted to build a Christ atop the mountain, according to businessman Rafael Fontana, who is part of the Friends of Christ Organization.

Mayor Adroaldo Conzatti supported the idea but did not provide public funds for the construction, so the community contributed with cash donations.

A brain hemorrhage related to COVID-19 killed Conzatti in March. Currently, the acting mayor is Jonas Calvi, and the project continues. 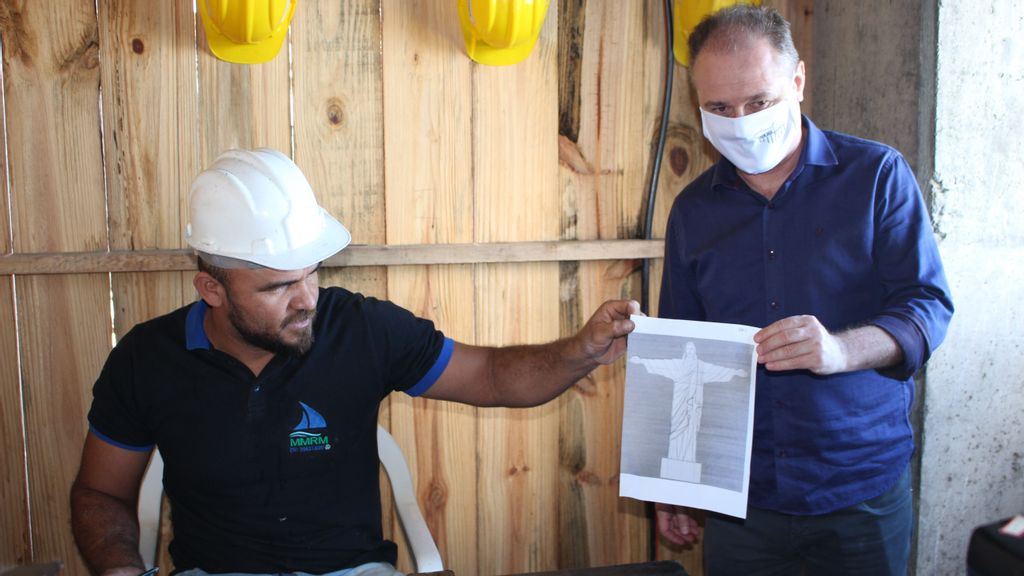 Artist Markus Moura (left) and Rafael Fontana, from the Friends of Christ Organization, work on the project. (Rafael Fontana)

“The voluntary contributions were so great that we began receiving donations from people from other states in Brazil and abroad, including Germany, Italy, Portugal and Japan,” said Fontana.

The sculpture’s construction will cost 2 million reais (approximately $360,000). One million reais ($180,000) was raised through donations and the municipality’s residents secured the rest through a bank loan.

“The name Christ the Protector speaks to the faith of our community. The Christ will protect our town since he faces this way,” said Fontana.

He estimates that every month 10,000 people from across the country will visit the new statue, whose ribbon cutting will take place in December this year.

Compared to Rio de Janeiro’s Christ the Redeemer, the new monument will have a difference other than its height.

“Tourists and city residents will be able to enter the statue and ride an elevator [111 feet] up to the sculpture’s chest. From there, they will have a special view of the Taquari Valley through a large glass window. It will be possible to take pictures, selfies and videos,” said Artur Lopes de Sousa, 64, the General Supervisor at Works and Planning of the Christ.

The statue is made up of 44 tons of steel rods, over 650 cubic yards of concrete and 14.8 tons of metal. Two cranes lifted the statue’s arms and head to their places in early April, said Sousa, who has more than 40 years of experience in construction and feels honored to be a member of the small team involved in the piece.

The sculpture weighs about 660 tons. It’s as tall as a 14-story building. The hands of Genésio Gomes de Moura, a talented visual artist from northwest Brazil, and his 40-year-old son Markus Moisés Rocha Moura shaped it. Gomes de Moura, 66, goes by the pseudonym of “Ceará.” Due to health problems, Ceará delegated the task to his son, who lives in the municipality of Ouro Fino, in Minas Gerais, southeast Brazil.

“Modeling Christ’s face took about three months, and it weighs around 44 tons,” said artist Markus Moisés, who also sculpted the second largest Buddha statue in the world and the largest in Latin America. It is at the entrance of the Zen Buddhist Monastery, in Ibiraçu, Espírito Santo and took more than a year to complete.

Other Christs in South America

Christ the Redeemer (Rio de Janeiro): 124 feet, including the base.

Christ by Elói Mendes (Minas Gerais): 129.5 feet, including the base.

Christ the Redeemer at the Andes (Chile): This image is not among the tallest (it measures a little over 19 feet and weighs 4.4 tons), but it stands at 12,572 feet above sea level, in the Andes mountain range.