The proposal, which would give 700,000 Americans more congressional representation, has never been closer to passing. 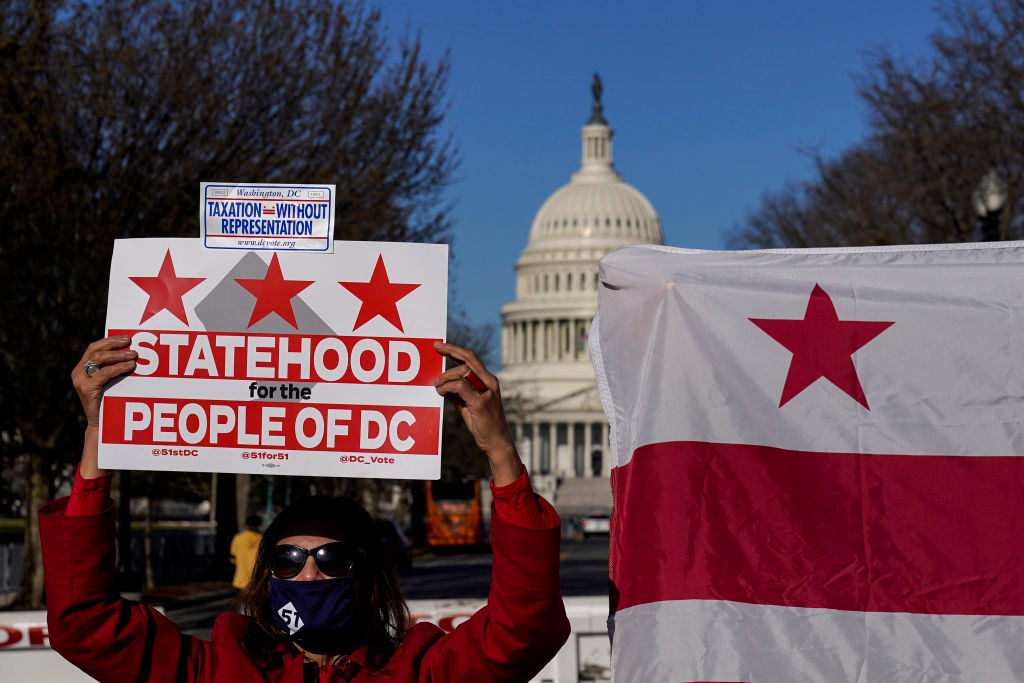 After passing in the House for the second time, statehood for Washington, D.C., has never been closer to reality. But a Republican Party armed with the Senate filibuster may stand in its way.

The Washington, D.C. Admission Act, symbolically titled H.R.51, aims to make the district the 51st state and was passed with unanimous Democratic support in a 216–208 party-line vote in the House of Representatives on Thursday. The legislation, which the House also approved last year, would shrink the size of the federal district to two square miles containing federal buildings.

The remaining residential and commercial areas would become the state of Washington, Douglas Commonwealth, in honor of the abolitionist Frederick Douglas, who died in 1895.

Democratic proponents of statehood argue it is the only way to ensure full representation and voting rights for Washington, D.C., residents, but Republicans say the move is just a play to increase the Democratic majority in the Senate.

“With Democrats in control of the Senate and White House, and with 54 percent of Americans supporting the bill, we have never been in a better position to achieve D.C. statehood,” Del. Eleanor Holmes Norton (D-D.C.) said after the House’s passage of the bill on Thursday.

The bill has notably also been endorsed by President Joseph R. Biden Jr.

Following a promise from Senate Majority Leader Chuck Schumer (D-N.Y.) to consider the legislation in his chamber, advocates for statehood said they felt optimistic about its chance.

“We’re confident that this will pass the Senate,” Josh Burch, member of the grassroots movement Neighbors United for DC Statehood, told Zenger News.

“This is a crystal clear issue of right versus wrong,” Burch said. “The people of D.C. have waited too long to be treated equally in the union. We will continue to press senators to pass the statehood bill via a simple majority vote like all other statehood admissions.”

However, the Senate filibuster is likely to prevent the Democratic Party in the Senate, which is split 50–50, from approving Washington, D.C., as the 51st state, given a history of Republican opposition. Sixty senators would need to vote in favor of the measure, which is sure to be an uphill battle.

So far, no Republicans have expressed support for the bill, and there are still a handful of Democratic holdouts, including Sens. Joe Manchin (D-W.V.) and Kyrsten L. Sinema (D-Ariz.).

Proponents of Washington statehood, which Congress first voted against in 1993, have long argued that it would be the best way to ensure full voting rights and equal representation for the city’s residents, whose lone delegate in Congress does not have full voting powers.

With more than 712,000 people living in the city, the district has a larger population than the states of Vermont and Wyoming. Washington, D.C., residents pay more in federal taxes per capita than any state, and its service members have fought in every American war.

Norton added that Washington residents have been petitioning for voting representation in Congress for 220 years, including when 86 percent of residents voted for statehood in 2016.

“My own family has lived in D.C. since my great-grandfather Richard Holmes, as a slave, walked away from a plantation in Virginia and made his way to D.C. almost 200 years ago. Richard Holmes made it as far as D.C., a walk to freedom but not to equal citizenship so far for our family.”

The Census Bureau also indicates that Washington — long nicknamed “Chocolate City” — is home to a larger proportion of African Americans than any existing state, at about 46 percent of the population. The district’s lack of congressional representation coupled with its racial makeup has led statehood proponents to decry the disenfranchisement of black voters.

“We believe that our diversity makes us stronger,” Mayor Muriel Bowser (D) testified at a House Oversight and Reform Committee meeting in March. “We’re proud of our history of black political power, and in no way do we think that that should prevent us from what should be our rights as Americans and as taxpayers in this nation.”

“We believe very strongly that it is a civil rights and a voting rights issue that suppresses the voices of thousands of African Americans in the nation’s capital,” she said.

Supporters of statehood have also pointed to the level of federal oversight the district receives and argue that it would have stronger local authority if it were a state. Congress has the ability to overturn legislation passed by Washington’s government and retains a level of control over its budget.

As the daughter of the former chairman of the House’s District of Columbia Appropriations Subcommittee, House Speaker Nancy P. Pelosi (D-Calif.) has touted statehood as “in my DNA.”

During a debate before the House vote, Pelosi said the Capitol “would have had protection much sooner” during the Jan. 6 Capitol breach if it were a state. Instead, she said, Washington had to wait several hours before the National Guard was approved to help secure and protect the building.

“The governor of any one of our states has the authority to call in the National Guard,” Pelosi said. “That is not an authority that is afforded to the mayor of Washington, D.C.”

Despite support from the president and House speaker, though, many Republicans have opposed the push for statehood and are expected to once again block its passage in the Senate.

Republicans have accused their Democratic colleagues of attempting to permanently increase the size of their Senate delegation by creating a new Democratic-majority state with two Democratic senators. The district, over 92 percent of which voted for Biden in last year’s presidential election, would perpetually provide two Democratic senators if statehood were granted, they argue.

In a recent memo, House Minority Whip Steve Scalise (R-La.) called the idea of a 51st state between Virginia and Maryland “nothing more than a partisan power grab from Speaker Pelosi and her socialist allies to add two more Democrats to the Senate.” Meanwhile, senators from less populous states have expressed concerns that statehood may “dilute” the voting power of their senators.

Others have claimed that making Washington, D.C., a state through legislation would be unconstitutional, citing the Constitution’s mandated creation of the seat of the federal government and the 23rd Amendment, which gave the district three Electoral College votes.

Twenty-two Republican state attorneys-general penned a letter to Biden and congressional leaders last week arguing that the “only lawful way to provide statehood to the District of Columbia is to amend the Constitution.”

“Not only does Congress lack the authority to create an entirely new state out of the District, but it also does not have the authority to reduce the size of the District to the equivalent of a few federal buildings and surrounding parks,” the 22 Republican attorneys-general wrote in the letter. “Indeed, if it were so easy, there would have been no need for the Twenty-third Amendment.”

Co-sponsors of the bill have countered by insisting the bill does comply with the Constitution and that the downtown area, where government building are located, would remain federal territory.

“The only limitation on Congress’ authority to admit new states is that it cannot create a new state from an existing state without the existing state’s consent,” Norton said, adding that Congress had previously returned federal land back to Virginia in the 1800s. “The State of Washington, D.C., would be created from land ceded by the federal government, not an existing state.”

To avoid constitutional concerns, some Republicans, such as Sens. Lindsey O. Graham (R-S.C.) and Mitt Romney (R-Utah), have backed the idea of retroceding the district into Maryland, which gave up the land north of the Potomac River used to create the federal district in the 1700s.

Sen. Roger W. Marshall (R-Kan.) introduced a bill on Thursday to do just that.

The move would give residents a voting member in the House instead of two senators.

“If Democrats truly want representation for the residents of the capital, Congress should consider alternatives that make sense for the nation as a whole, not just the Democrat Party,” Marshall said.

Maryland officials, however, have not yet indicated whether they would agree to the plan.

Yet even if the state were to consent, Washington activists argue the compromise would not go far enough in giving district residents representation and have called for GOP senators to reconsider.