Experts Reconstruct Face Of Mesolithic Woman Who Lived 9,300 Years Ago

The remains of Elba, meaning “the woman who comes from the mountains,” were found in a cave in Galicia, Spain. 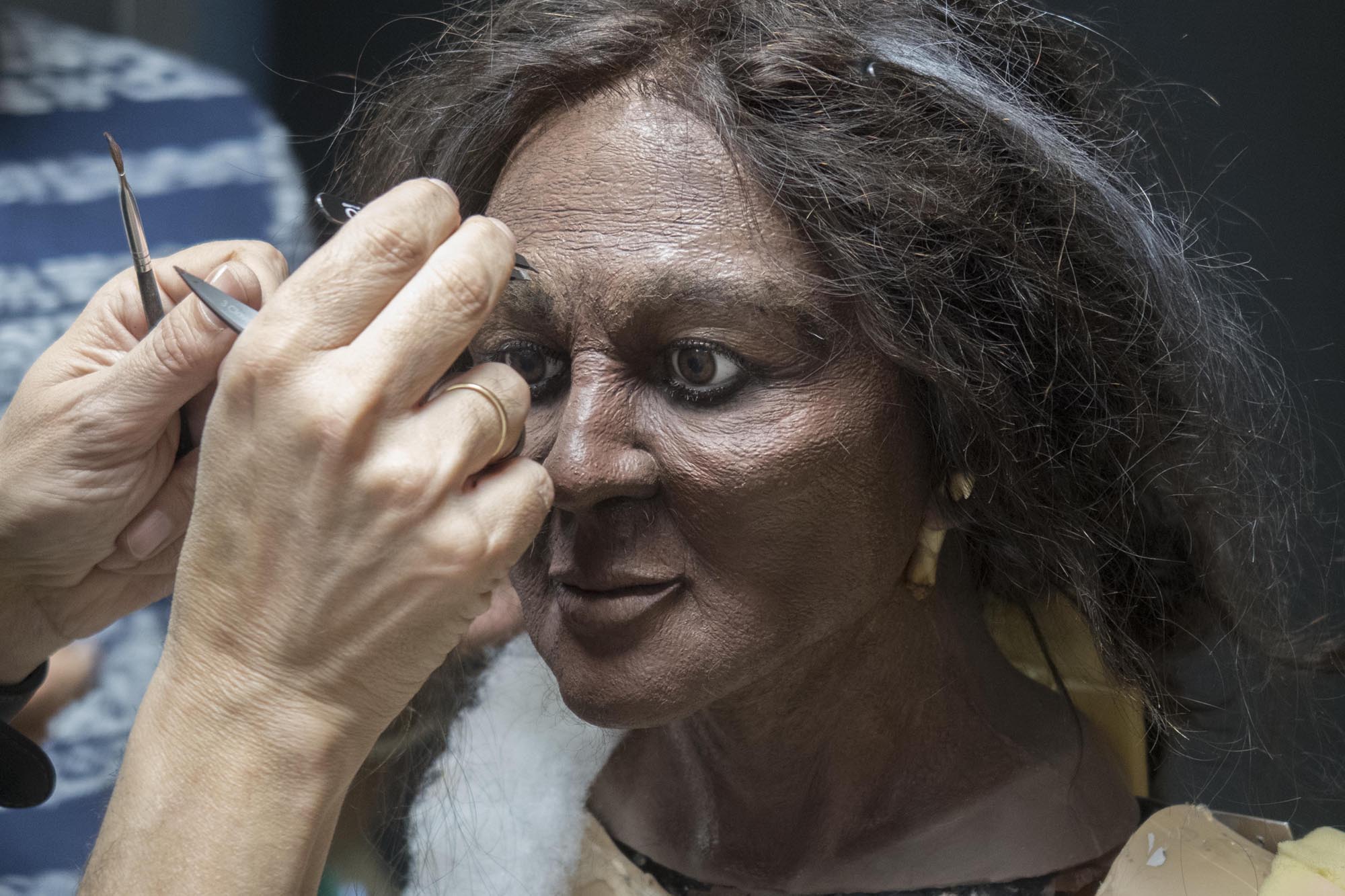 The most recent face reconstruction of Elba, the Mesolithic woman discovered in a cave northwestern Spain. (Rubio Garcia/Real Press)

Spanish experts have reconstructed the face of a Mesolithic woman who lived in the Galicia region some 9,300 years ago, revealing she likely had dark skin, brown eyes and dark hair — her appearance similar to her UK contemporary, Cheddar Man.

The remains of Elba, meaning “the woman who comes from the mountains,” were found in the Chando Lindeiro cave in the northwestern region of Galicia, Spain, in 1996.

Aurora Grandal Danglade, professor of paleontology at the Institute of Geology at A Coruna University, said that the original discovery was difficult as the team of speleologists and archeologists had to go through a sinkhole caused by a collapse in the cave where the remains of Elba were found, along with three aurochs (an extinct species of large wild cattle).

After examining Elba’s skull, researchers confirmed that it belonged to a homo sapien. The rest of Elba’s skeleton and the remains of the three aurochs were not unearthed until 2010, due to difficulties associated with accessing the part of the cave where they were found.

The skull was analyzed by forensic expert Fernando Serrulla, who confirmed the remains belonged to a woman aged between 20 and 40 who was around 5 feet (1.5 meters) tall. The bones dated back 9,300 years, around the same age as the bones of the three aurochs.

Due to the similarities in age, it is believed the woman and three animals were in the cave together during a collapse that buried and killed them all.

Danglade and her team believe that Elba looked after the animals.

“We call her shepherdess, but many people deny the theory because the domestication of wild animals is believed to have happened thousands of years later,” Danglade said. “We’re not saying that Elba was the first person to have domesticated animals, but we believe there may not have been a unique place where animals were domesticated and then spread to other places.

Elba also had very toned muscles and a fracture on her right foot. “But it was an old fracture, so it probably happened long before,” said Danglade. “The forensic team believes it was a corrected fracture and that she may have limped as a result.”

Elba also probably suffered from tooth pain, as a tooth found in the cave had a large cavity.

“It’s not common to see teeth cavities in hunters and gatherers as they did not eat a lot of carbohydrates,” Danglade said.

Experts said they believe Elba ate forest fruits and berries but “was not a big carnivore.”

After two types of bone analysis, researchers found that her maternal lineage descended from populations of hunter-gatherers, while the second tests helped them

“Such dark skin was common in other humans in Europe at the time,” said Danglade. “In fact, Elba was a contemporary of Cheddar Man (a Mesolithic man found in Cheddar Gorge in Somerset), but with brown eyes rather than the blue eyes of Cheddar Man.”

Forensic expert Margarita Sannin helped to reconstruct part of Elba’s likeness based on the skull uncovered in the first phase of research. After a sketch was created, experts scanned Elba’s remains and elements were added to give the appearance of human skin, including its dark pigmentation discovered through genetic analysis.

The results of the research team’s reconstruction of Elba’s face were unveiled at the reopening of the Museum Xeoloxico of Quiroga in Galicia at the end of 2020.

«Previous Post
VIDEO: Ko-Ahh-La Bear: Adorable Baby Joey Clings To Mom As She Celebrates Her First Birthday  »Next Post
Health Alert: Sleep Is Not A Luxury, It’s A Necessity