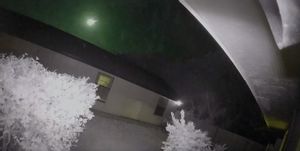 A fireball — actually a very bright asteroid — about the size of a car was captured on video as it lit up the night sky on April 12.  The object flew past Earth without incident.

This video shows the object in the sky over South Florida, but the asteroid was also reportedly spotted in the Bahamas.

“Astronomers calculated the asteroid, dubbed 2021 GW4, to be about 14 feet (4 meters) across — much too small to survive a journey through Earth’s atmosphere if it were ever on course to collide with our planet, according to a NASA link provided by space.com.

“But at its closest, at about 9 a.m. EDT (1300 GMT), the asteroid was about 16,300 miles (26,200 kilometers) away from Earth — less than one-tenth the distance between the Earth and the moon, and quite close as far as asteroid approaches go.” (If the asteroid had encountered the atmosphere, which stretches up about 6,200 miles above the Earth’s surface, it would have become a meteor.)

Not everyone is convinced that what people saw was the asteroid. “It’s a normal fireball and nothing to do with GW4,” tweeted Jonathan McDowell, an astronomer at the Harvard-Smithsonian Center for Astrophysics.

The various videos of the extraterrestrial visitor show different angles of the moment the asteroid passes by the planet, first appearing as a small streak of light before turning into a large fireball.

Experts believe the asteroid was traveling northbound between the western tip of Grand Bahama Island and South Florida, where it was seen by numerous people.

The National Weather Service Tampa Bay posted a photo after the bright flash of light was picked up by the Geostationary Lightning Mapper. The mapper, carried on a satellite, monitors changes in brightness to keep track of lightning.

(Edited by Judith Isacoff and Matthew B. Hall, Visuals edited by Claire Swift)