Tar-encrusted Turtles Cleaned And Released Into The Sea

Young sea turtles were safely returned to their habitat. 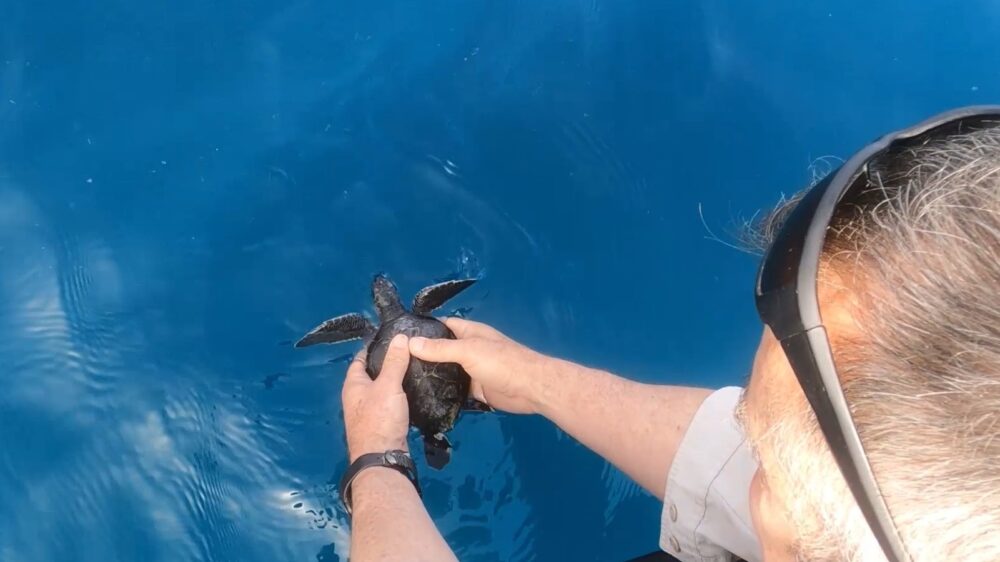 Six young sea turtles severely damaged by tar pollution were treated and returned to the Mediterranean Sea off the coast of Israel. (Screenshot from video by Yaniv Cohen/INPA)

Oleg, Shlomi, Ruchama, Karin, Aloha and Yoni were in critical condition when they were rescued from an oil spill along Israel’s Mediterranean coast in February.

The six young sea turtles, three brown and three green, washed up on the beach with black tar stuck to every part of their bodies, including eyes, nostrils and mouth. Another 21 turtles were found dead nearby, unable to survive the tar coating.

The sticky substance restricts the turtles’ ability to move, see, breathe and eat. Any tar accidentally ingested clings to the walls of the digestive tract, blocking the absorption of nutrients and releasing toxins into the body. The tar can also damage the salivary glands, which are essential to the turtles’ ability to balance salts.

Without treatment, they would not survive. These six youngsters, and five others found on other beaches, were quickly transferred to the National Sea Turtle Rescue Center of the Israel Nature and Parks Authority (INPA) in Mikhmoret.

INPA explains that only young sea turtles were found and rescued because in their first seven to 10 years of life they float on carpets of sargassum algae in the open sea, feeding on the algae and tiny animals in this habitat.

Unable to dive deeply or swim fast, they couldn’t escape the oil slick and were swept away and ejected to the shore.

Professionals and volunteers at the center painstakingly removed the tar from the turtles’ bodies using cloths and ear swabs soaked in vegetable cooking oil.

The turtles were fed mayonnaise, a treatment known to be effective in such cases due to its ability to dilute and clear the tar from the digestive tract as well as provide strengthening proteins and fats.

On April 7, Oleg, Shlomi, Ruchama, Karin, Aloha and Yoni were deemed well enough to be returned to their natural home in the open sea.

Accompanied by the staff of the Sea Turtle Rescue Center and INPA rangers, as well as Shaul Goldstein, director of INPA, the rehabilitated turtles were brought by boat into the waters off Mikhmoret Beach, between Netanya and Hadera.

“One by one, in turn, they were returned to the open sea while we were praying and praying that they would survive the variety of dangers and challenges threatening the sea turtle population in the Mediterranean,” INPA’s Yaniv Cohen said.

Dangers include discarded fishing gear such as hooks and fishing nets, as well as plastic bags and other pollution.

“The Nature and Parks Authority thanks all those vigilant citizens who reported the injured and even dead sea turtles, who beyond the privilege and possibility of saving their lives make it possible to assess the extent of the damage of tar pollution in the sea turtle population,” Cohen said.

The saga is not over, as there’s a strong possibility of long-term developmental damage from the tar spill to all marine animals including mammals, fish and invertebrates.

Meanwhile, however, another five rehabilitated turtles were released on April 12 at Nitsanim Beach between Ashdod and Ashkelon.

Tar-encrusted turtles cleaned and released into the sea appeared first on ISRAEL21c.