Space could serve as a potential incubator where seeds and young plants could build up resistance to threats found on Earth. 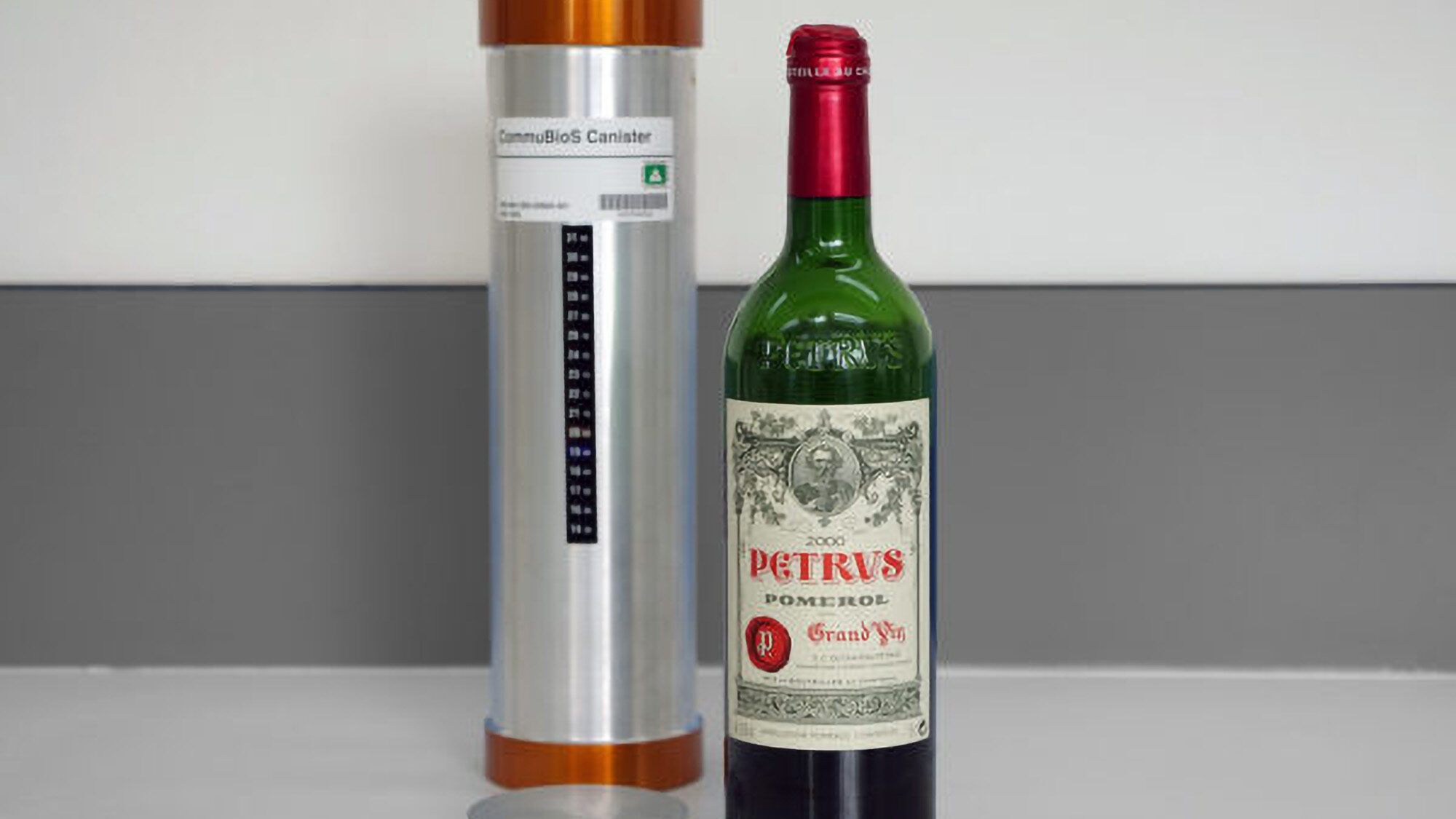 A bottle of Petrus wine that was sent to the International Space Station for 14 months and returned with some different characteristics. (Courtesy of Space Cargo Unlimited)

A dozen bottles of Chateau Petrus 2000 that spent 14 months on the International Space Station developed a distinct “gunpowder” aroma, compared to the same wine on Earth. It apparently aged faster in zero gravity, experts say.

The $3,000-a-bottle French red wine from the Bordeaux region, which comes under the Pomerol appellation, earned a perfect 100 score by world-famous wine critic Robert Parker.

The Mission WISE (Wide-field Infrared Survey Explorer) research program, developed by European startup Space Cargo Unlimited, sent the wine to the ISS on Nov. 2, 2019.  After spending 438 days and 19 hours aboard the ISS, the wine may reveal unknown aging secrets.

After the Petrus wines reached Earth, Space Cargo Unlimited held a press conference at Bordeaux City Hall on March 24, followed by an organoleptic (sensory) analysis led by Philippe Darriet, director of the Oenology Research Unit of Bordeaux’s Institute of Vine and Wine Science.

The tasting consisted of a panel of 12, including five people familiar with professional tastings, who evaluated the terrestrial and space wines based on their visual, gustatory and olfactory characteristics.

Nicolas Gaume, co-founder-CEO of Space Cargo Unlimited and a self-described “space fanboy,” said the first findings are promising for the future of the research program.

“After being involved in this research project for the past six years, we realize the outcome is really different,” he said.

“The effects of space and the absence of gravity over the wine-aging process are largely unknown, and we only understand one-quarter of it. That means there is no linear projection between what happens on Earth and in space.”

One of the wine experts included in the tasting, Jane Anson, Bordeaux correspondent for wine magazine Decanter, said she discovered the wines aged in space had a distinct floral and smoky character.

“It may have aged faster, but it is incredibly difficult to give a definite answer,” she said. “In terms of what the taste means on Earth — it is definitely a more evolved wine.

“All I can definitely say is that I wasn’t expecting to detect such a significant difference between the two, and I would love to see the research when they do the chemical breakdown of other bottles.”

Anson was excited to detect smoky flavors, which she described as “gunpowder notes that can be obtained as the wine gets older” in combination with remnants of “fruity flavors, violets and roses.”

One difference that was detected with certainty is the development of anthocyans — pigments that contribute to the brick-red color in the wines sent to space.

“I want to know if what I tasted was bottle variation or real,” Anson said. “Who knows, it could theoretically be a fluke. Until we try three or four bottles we cannot know.”

Gaume said a combination of factors accentuated the floral notes and brick coloring in the ISS wines. However, he believes the absence of gravity is the main parameter contributing to the evident change.

“When you are on the ISS, you are shielded from most of the radiation in space, which can be lethal. The station is providing the same conditions as we have on Earth, except for gravity, which is the only parameter that never changed,” he said.

Space Cargo Unlimited’s choice of Petrus’ monovarietal wine — it is a Merlot -— of the 2000 vintage was not coincidental. There has been ample research into the wine over the decades, and it would serve as great comparison material in the upcoming analysis.

“It is always easier to have just one grape variety in comparison to a Cuvée, because you wouldn’t be able to determine which is the variety that made the difference,” he said.

Since glass cannot be sent to space, due to security reasons, the Petrus wines were in special containers. Alongside the 12 wine bottles, 320 vine spurs were also sent to the ISS for 10 months. After their arrival on Earth on Jan. 14, the spurs were rehydrated and underwent microscopic analysis before they were planted in Institute of Vine and Wine greenhouses. Some were also planted in greenhouses of the Mercier group in the Vendée region.

A few weeks later, the vines exposed to a zero gravity environment showed a remarkably faster development of shoots and buds, compared with the ones that had remained on Earth.

Anson, who visited the greenhouses, said: “This development happened so quickly, and they said they had to cut them back in order to ensure an efficient root growth.”

The reasons have yet to be determined, but he is satisfied the evidence shows that space has had an impact on them, according to Gaume. He also said microscopic analysis revealed a different cell structure in vines sent to space.

“The initial hypothesis was that if these plants survive the absence of gravity, they will be more resilient against lesser stressors like climate change,” he said. “We are going to expose these plants to diseases and climate change.”

What the future holds

As for aging wines in space in the near future, both Anson and Gaume said it would take a lot of money, as well as finding solutions to technical issues.

However, they did not exclude the possibility of top-quality wines being aged in space soon.

Gaume started the project in order to tackle environmental problems that could face future generations. He said the company’s goal includes six experiments. So far, three have been finalized.

He likes the idea of the company becoming “space-rooted botanists,” with space serving as an incubator where seeds and young plants could build up resistance to diseases and other threats found on Earth. The next step would be to try to ferment grape must into wine on the ISS, a project which would take a lot of effort.

“In this world of instant answers, we have to appreciate that we are on a journey.”