George Floyd’s death ignited a movement, whose leaders worry the sentence may not be tough enough while others fear a mistrial. 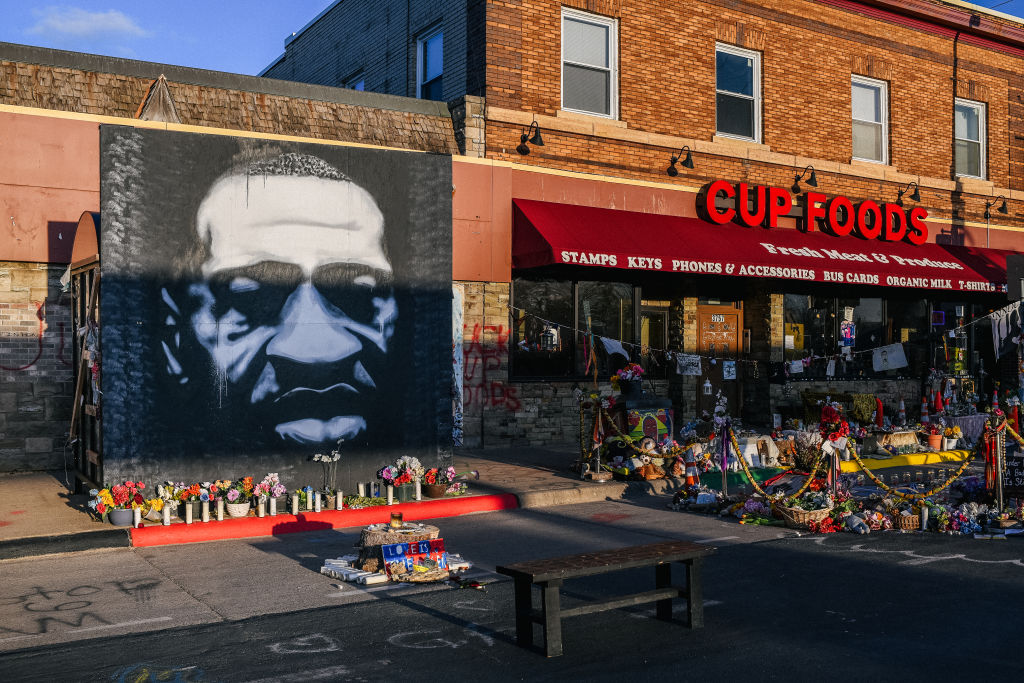 A mural of George Floyd is shown in the intersection of 38th St and Chicago Ave in Minneapolis, Minnesota. Former Minneapolis police officer Derek Chauvin, was found guilty today of multiple counts of murder in the death of George Floyd. (Brandon Bell/Getty Images)

A day after the trial closed, a Minneapolis jury on Tuesday convicted former police officer Derek Chauvin on two charges of murder and one charge of manslaughter for his role in the death of George Floyd during a May 2020 arrest. He now faces up to 40 years in prison for the most serious charge.

Chauvin had pleaded not guilty to all charges. The jury found him guilty on the charges of second-degree murder, which is unintentional killing and carries a prison sentence of up to 40 years, third-degree murder (which can mean up to 25 years behind bars) and second-degree manslaughter (which carries a maximum penalty of 10 years). These prison sentences would run simultaneously, as required by Minnesota law.

However, Chauvin waived his right for the jury to decide his sentence and Judge Peter Cahill will instead determine the length of his prison term. Cahill said Tuesday that sentencing will happen in about two months, with an exact date yet to be announced.

Prosecutors had argued that Floyd, an unarmed black man whom Chauvin arrested for allegedly using a counterfeit $20 bill, died as a result of the officer kneeling on his neck for more than nine minutes and failing to administer emergency aid.

Chauvin’s defense lawyers, though, argued that drug use in the period before his arrest and a heart condition contributed more to Floyd’s death than Chauvin’s use of force.

Defense attorney Eric Nelson told jurors Chauvin’s use of force against Floyd was justified because he had witnessed Floyd struggling with other officers when he arrived on the scene. He also criticized the prosecution’s emphasis on the amount of time Chauvin restrained Floyd.

With civil unrest and a “defund the police” movement unfolding in the summer after Floyd’s death, prosecutors stressed only Chauvin was on trial, not the police as a whole.

“Policing is a noble profession,” he said. “There is nothing worse for good police, than a bad police.”

The closing arguments from each side came after the jury heard from 45 witnesses throughout the trial and was allowed to view video of the incident recorded by both police and bystanders. The prosecution had called 38 witnesses, including medical experts and experts on police use-of-force who testified that Floyd died from a lack of oxygen and that Chauvin’s restraint was improper.

The defense called just seven witnesses during the trial. Chauvin, for his part, invoked his Fifth Amendment right against self-incrimination to avoid giving testimony about the arrest.

Floyd’s death, which was caught on video that later spread on social media, sparked months of demonstrations against police brutality and racism around the world, which in some U.S. cities devolved into civil unrest and led to property damage and violent confrontations.

As the jury deliberated on a verdict Tuesday, President Joseph R. Biden Jr. revealed he had spoken with the Floyd family and remarked on his preferred outcome during a meeting with leadership of the Congressional Hispanic Caucus.

“I’m praying the verdict is the right verdict, which is — I think it’s overwhelming, in my view,” Biden said. “I wouldn’t say that unless the jury was sequestered now and not hearing me say that.”

But Republican lawmakers criticized Biden for making comments before the verdict, with Sen. Ted Cruz (R-Texas) saying on Twitter that they could provide grounds for appeal.

In anticipation of the verdict, cities were preparing for the public response.

“We must acknowledge two truths: We cannot allow civil unrest to descend into chaos, we must protect life and property,” Walz said at a press conference after jury deliberations began.

“We also must understand very clearly, if we don’t listen to those communities in pain, and those people on the streets, many of whom were arrested for speaking a fundamental truth, that we must change, or we will be right back here again,” he said.

Adding to the concern consuming some city officials was recent protests in the Brooklyn Center, Minnesota, where 20-year-old Daunte Wright, another unarmed black man, was fatally shot during the trial by a police officer in a traffic stop only a few miles from where Floyd died. The incident led to several nights of protests, which included skirmishes with police and vandalism.

Other major cities like Los Angeles, San Francisco, New York City, Atlanta and Philadelphia, some of which were hotspots for protests last summer, also moved on Tuesday to make more police officers available and ramped up their coordination efforts with other law enforcement agencies.

Instead, there were muted celebrations, with the guilty verdict a bittersweet result for many.

Lawyers for Floyd’s family issued a statement calling the result “painfully earned justice for the Floyd family & community.” They also posted videos on social media showing a telephone call to the family from President Biden and Vice President Kamala D. Harris after the verdict.

Minnesota Gov. Tim Walz, a Democrat, said he planned to make a televised address, while Paul Gazelka, the Republican majority leader in the Minnesota State Senate, praised the verdict, too.

“Though no verdict will bring George Floyd, I pray the Floyd family today is in some way comforted knowing the judicial system has provided justice. Today we have been reminded the determination of guilt is best decided by a jury of peers reviewing the facts,” Gazelka wrote in a statement.