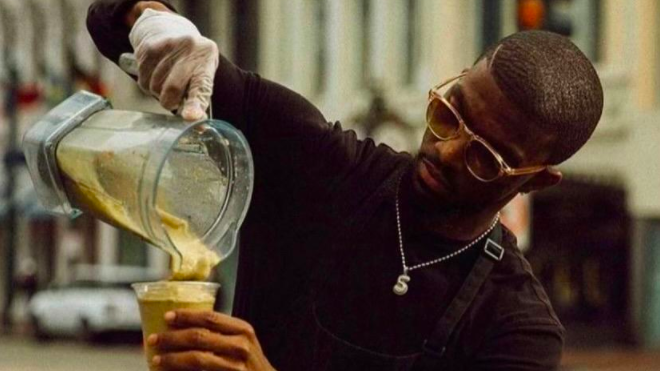 Unfortunately, that food usually comes in the form of seafood, gumbo, jambalaya, king cake and beignets — items that make your taste buds happy and your waistline expand.

However, 5th Ward native Domonique “Dinero” Meyers offers a delicious alternative to the city’s famous, but sometimes greasy fare. His Ascent Blends brand of organic smoothies had a modest start on the sidewalks of New Orleans, just a blender and organic fruits.

His efforts at healthy living didn’t go unnoticed — he recently secured a distribution deal with Rouses Markets that will soon see his smoothies and ginger shots on its store shelves. (Rouses started in Houma, Louisiana, more than 40 years ago and is one of the largest independent grocers in the U.S.)

Meyers — who prefers to go by Dinero — understands that health is wealth and hopes his Ascent Blends will create a healthier city. He recently talked with Zenger News about the success of his company, how the Rouses deal came to fruition and much more.

Zenger: Tell us about the name of your company and the mission behind it.

Dinero: It’s Ascent Blends; everything is handcrafted, made fresh daily. We’re your jump-start to becoming healthier. We are community-driven, and we care about your health.

Zenger: From what I understand, you were making smoothies in the hood and that turned into something big. How did it get started?

Dinero: Being mindful of my diet over the years, I started this company in July 2016. So, five years ago, I was riding on a pink scooter in my neighborhood, the 5th Ward. And I see a building that used to fix motorbikes and scooters for lease. I said: “This could be a smoothie business right here.”

I reached out, talked to the owner and the numbers were good. But I really wasn’t ready to start a business there. I had never even made a smoothie to sell. The idea just kind of sparked. I worked at a nonprofit, so I asked a few people there what I should do. They said: “Well, if you can’t get the building, just get started by setting up a stand at the barbershop in the neighborhood.” And that’s what I did.

They also told me to get quality ingredients. I wanted to make sure my smoothies are healthy. I wound up using non-dairy agave, which is better than sugar.

I started selling smoothies at the barbershop. They were an instant hit. I was out there 24/7, all over the city. I would have the entire sidewalk lined up with people wanting smoothies, which weren’t available anywhere else. We didn’t have any healthy options there — the 5th Ward is crammed with liquor stores and fried foods.

I was working out every day on the sidewalk, people were joining in with me, and I also started running and doing 5K runs. We are definitely about health education and informing all of our customers, leaving them with literature and inspiration on changing their lifestyle. It’s much more than just a smoothie.

Zenger: Was it hard to get these healthy smoothies to take off in a city not known for having healthy dining options?

Dinero: it was a bit challenging, but it wasn’t hard. About three or four years ago, things were shifting in the city. You started seeing some healthier options come around. I think that I had a lot to do with people being able to have access to that kind of product. It helps that my smoothies really taste good. I’ve had people looking at my green smoothie like:“Man, that thing probably tastes nasty.” Keep in mind, I’m dealing with the hood, so it was straight like that. It was: “Ugh, I don’t want that green one, give me the pink one.” But then they would taste the green one and find out it’s amazing.

I actually shook the culture from understanding that looks can be deceiving when it comes to things like a healthy smoothie. You have to give things a try.

Zenger: How did the deal with Rouses come about?

Dinero: One of my homies had a meeting with Rouses about figuring out how to do something together. He brought in a few people who had businesses already, from the farmers to people who cooked to products. He said he wanted to do a vendor market every week or something like that at Rouses. So, I took the meeting. I’m community-based, and there were a lot of things at stake, as far as them righting their wrongs. So, if they were willing to do the undoing, I’m with it.

That was my whole pitch in the meeting. This is not just about me. It’s about creating opportunities for jobs. It was a decision I had to make for myself and others. We are about four or five months in now, and every Saturday, we do the market at Rouses on Tchoupitoulas. And very soon, they will have my fresh-pressed juices and ginger shots on the shelf in their CBD [Central Business District] location.