U.A.E. Has Taken Up An Enormous Task: Negotiating Peace Between India And Pak

The Gulf nation helped broker a ceasefire between the South Asian nations and now wants to facilitate the exchange of ambassadors. 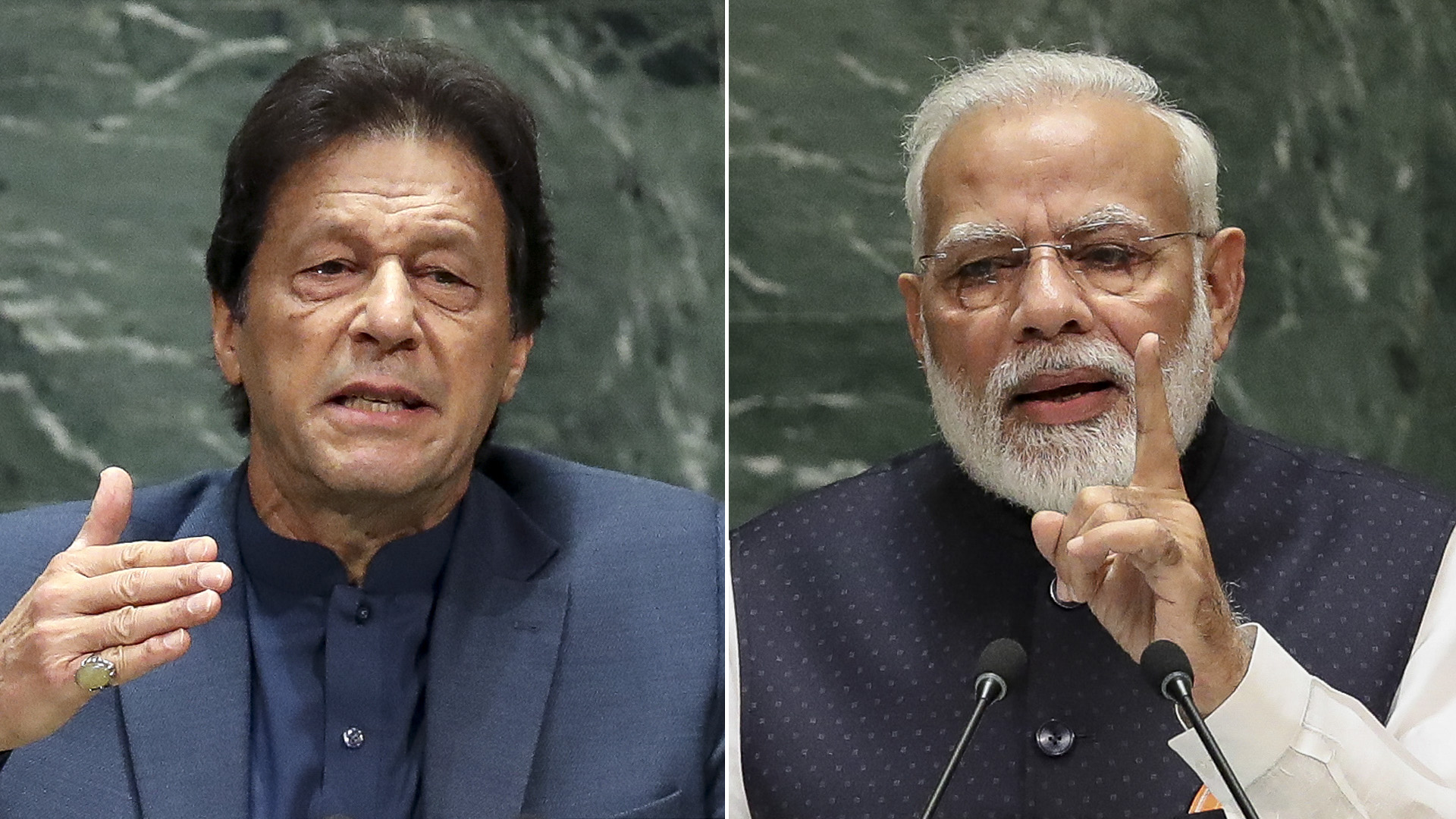 LAHORE, Pakistan — India and Pakistan, the decades-old troubled neighbors, might have a new mediator in the United Arab Emirates (U.A.E.)

The U.A.E. has strengthened its image as a successful negotiator and mediator over the last couple of years with the landmark Abraham Accords between Israel and rival Arab states — a first-of-its-kind deal — in 2020, and the Ethiopia-Eritrea peace deal in 2018 to its name.

The Gulf nation helped broker a ceasefire between India and Pakistan at the Line of Control, the unofficial border separating the parts of Kashmir administered by the South Asian countries.

“Post the Director-General Military Operations Understanding 2021, a brigade commander-level flag meeting was held between the Indian and Pakistan Army at Poonch Rawalkot Crossing Point on March 26, 2021, to discuss implementation mechanism as per the understanding,” tweeted the Indian Army.

However, this might not be the end of the U.A.E.’s ambitions to become the next significant mediator between the two nuclear-armed neighbors. 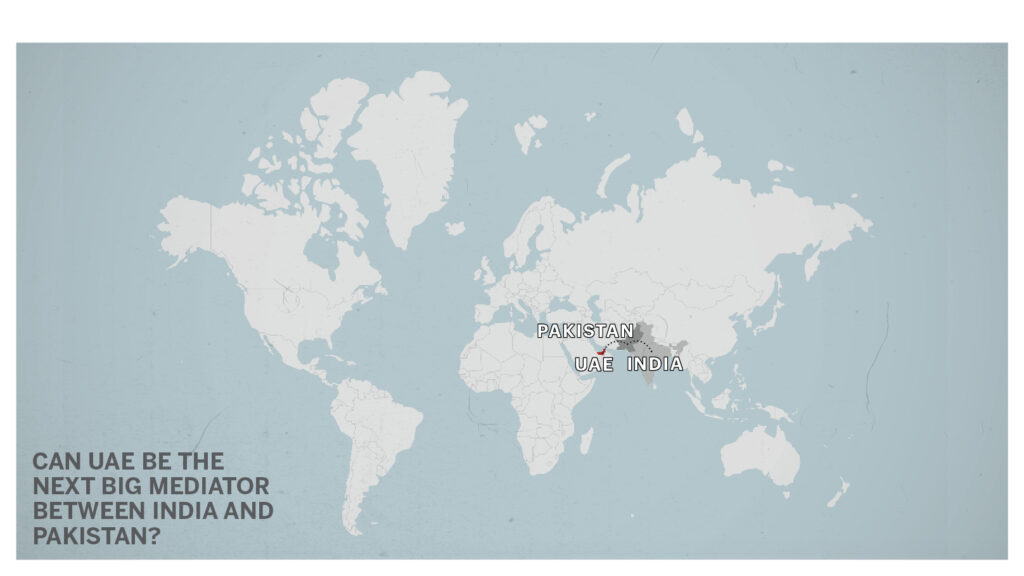 In a recent conversation between the former U.S. National Advisor H.R. McMaster and U.A.E. Ambassador to the U.S. Yousef Al Otaiba, the latter confirmed the Emiratis’ efforts to quell tensions between the two South Asian neighbors.

“We try to be helpful, where we have influence with two different countries, so India-Pakistan was the most recent one,” said Otaiba.

“They [India and Pakistan] might not, sort of, become best friends, but at least we want to get it to a level where it’s functional, where it’s operational, where they are speaking to each other, where there are lines of communication, and that’s our goal.”

U.A.E.’s role in brokering peace between India and Pakistan is more crucial than ever as a U.S.-based think tank projects a full-blown war between the two neighbors in the next five years.

“India and Pakistan may stumble into a large-scale war neither side wants, especially following a terrorist attack that the Indian government judges to be significant,” states the report, titled “Global Trends 2040”, published by the U.S. National Intelligence Council this month.

The report further notes: “The ability of Pakistan-based terrorists to conduct attacks, New Delhi’s resolve to punish Islamabad after such an attack, and Islamabad’s determination to defend itself are likely to persist and may increase. Miscalculation by both governments could prompt a breakdown in the deterrence that has restricted conflict to levels each side judges it can manage.”

Some analysts view U.A.E.’s role as a soft-power approach.

“The U.A.E. is looking to emphasize diplomacy, politics, and investment over direct or indirect uses of hard power,” Hussein Ibish, a senior resident scholar at the Arab Gulf States Institute in Washington, told Zenger News.

Ibish believes the U.A.E. is “a natural fit” as a third-party mediator between India and Pakistan. “It’s true for almost all the major countries in the Middle East, both small and large. The major regional conflicts are all either resolved, stalemated, or past the point of diminishing returns. So, the whole region is transitioning away from conflict and towards diplomacy,” he said.

The two major regional players in the Middle East — Iran and Saudi Arabia — have been locked in a perpetual ideological battle, coupled with allegations of funding rebel groups and mercenaries against each other in Syria and Yemen.

The U.A.E., on the other hand, did not choose the path of conflict. Its approach is driven more towards trade, economic cooperation, and diplomacy.

The U.A.E.’s interest and role in South Asia

Abu Dhabi’s Crown Prince Mohammed bin Zayed was the main person behind last year’s Abraham Accords and played a crucial role in arbitrating the peace deal between Ethiopia and Eritrea.

The U.A.E. is now looking at South Asia to play the same role.

“The U.A.E. has good relations with both India and Pakistan, trades with both countries, and is in a position to talk respectfully to both sides,” said Ibish.

Expatriates consist of over 88 percent of the U.A.E.’s population, of which Indians and Pakistanis comprise almost 40 percent.

India has the most prominent trading relations with the U.A.E. — about $59,110 million in 2020 — among Middle Eastern and West African nations. The U.A.E. is also Pakistan’s largest trading partner, as both countries traded goods worth over $6 billion in 2019.

Rakisits believes the workers play a critical role in the economic well-being of the U.A.E.

“So, there are strong economic and people-to-people links between the three countries. It is undoubtedly also in the U.A.E.’s economic interest to see a resumption of trade between the two countries, as much of the bilateral trade goes through the U.A.E.”

Some authors and geopolitical commentators believe Abu Dhabi is uniquely poised to play a role in South Asia as it is a regional political power.

“For instance, the most peaceful part of Somalia is the Somaliland statelet that’s backed by the U.A.E.’s military power. It has also shown advances in military technology and military training.”

Azizi said adding to the U.A.E.’s diplomatic clout is its tourism, media, educational, cultural power. “It hosts two of the four mega-connector airlines of the world, including one of the best airlines, Emirates. Not to speak of many media companies, N.Y.U. Abu Dhabi, Louvre, etc. Imagine how it can use this as leverage.”

The U.A.E.’s ambitions to potentially facilitate an agreement on the issue of Kashmir — a territorial dispute that has resulted in at least three major wars between India and Pakistan and countless other smaller military incidents and standoffs — is audacious.

The Gulf nation is not only looking to prove itself as influential peace brokers, but it also stands to gain a lot with its effort to reach an enduring peace deal between India and Pakistan, a grail sought after for almost 70 years now.

“The U.A.E. would see its attempts to reduce tensions over Kashmir as a blow to radical and violent Islamists, one of the main threats they also seek to counter domestically,” said Ibish.

“If achieved, they would present any breakthrough as a validation of their agenda of religious tolerance and diversity. So, there is a lot in it for the U.A.E. if it works, but no one will blame them in the case of a failure.”

Some analysts say U.A.E.’s role as an interlocutor between India and Pakistan cannot be called a successful one yet. Whether the U.A.E. will be as successful in brokering some agreement on the Kashmir front is a moot point, according to Rakisits.

“Kashmir is the crux of the festering bilateral relationship between the South Asian nations. Only if there is real political will in Islamabad and Delhi to come up with a satisfactory and permanent resolution to Kashmir that the U.A.E. could potentially play a role,” he said.

Rakisits believes there’s much behind-the-scenes work to be done before Pakistan and India can try to tackle Kashmir diplomatically.

Earlier, India had refused the former U.S. President Donald Trump’s suggestions of acting as an international mediator in the 70-year-old conflict.

Recently, Pakistan denied importing sugar from India a day after it said it would.

Ibish considers Kashmir to be a different ball game than the Abraham Accords. The U.A.E. is not a party to the conflict and doesn’t have the necessary incentives to offer both countries.

“The biggest difference with the normalization process with Israel through Abraham Accords is that the U.A.E. is not a party to the conflict over Kashmir or the India-Pakistan tensions overall. It can only serve as a go-between, but it can’t incentivize either side very much. The constraint is a lack of carrots and sticks,” said Ibish.

Azizi believes that the main obstacle facing the U.A.E. regarding the Kashmir issue is that “this is too big of a conflict to intervene in”.

“Compromise is hard between two nuclear powers, who have long been ensconced in rival geopolitical blocs (India with Russia and U.S., Pakistan with China) and have a significant territorial dispute. Abraham Accords are, of course, really significant, but they were a recognition of what was already going on for years. This [the India, Pakistan issue] is on a wholly different level,” Azizi said.

Rakisits pointed out the difference between the U.S. and the U.A.E.’s international stature as mediators in international conflicts.

“The big difference between the U.S. brokering the Abraham Accords and the U.A.E.’s role in the mediation between India and Pakistan on the issue of Kashmir is that Washington is a superpower which was able to sugar-coat the agreement with the promise of various economic incentives. The U.A.E. is only a regional player with limited resources and pull.”

Despite the challenges facing the Gulf nation, it can be only an “honest broker” for the moment.

“The country isn’t in a position to coerce or seriously induce either side to make major national security concessions. So, that’s a constraint. How far they go will almost be determined by what India and Pakistan are willing to give each other, and the U.A.E. doesn’t have much of a role to play in determining that,” said Rakisits.