VIDEO: How Community Kitchens In India Are Feeding Farmers’ Protest

Langars are an integral part of the Sikh culture. 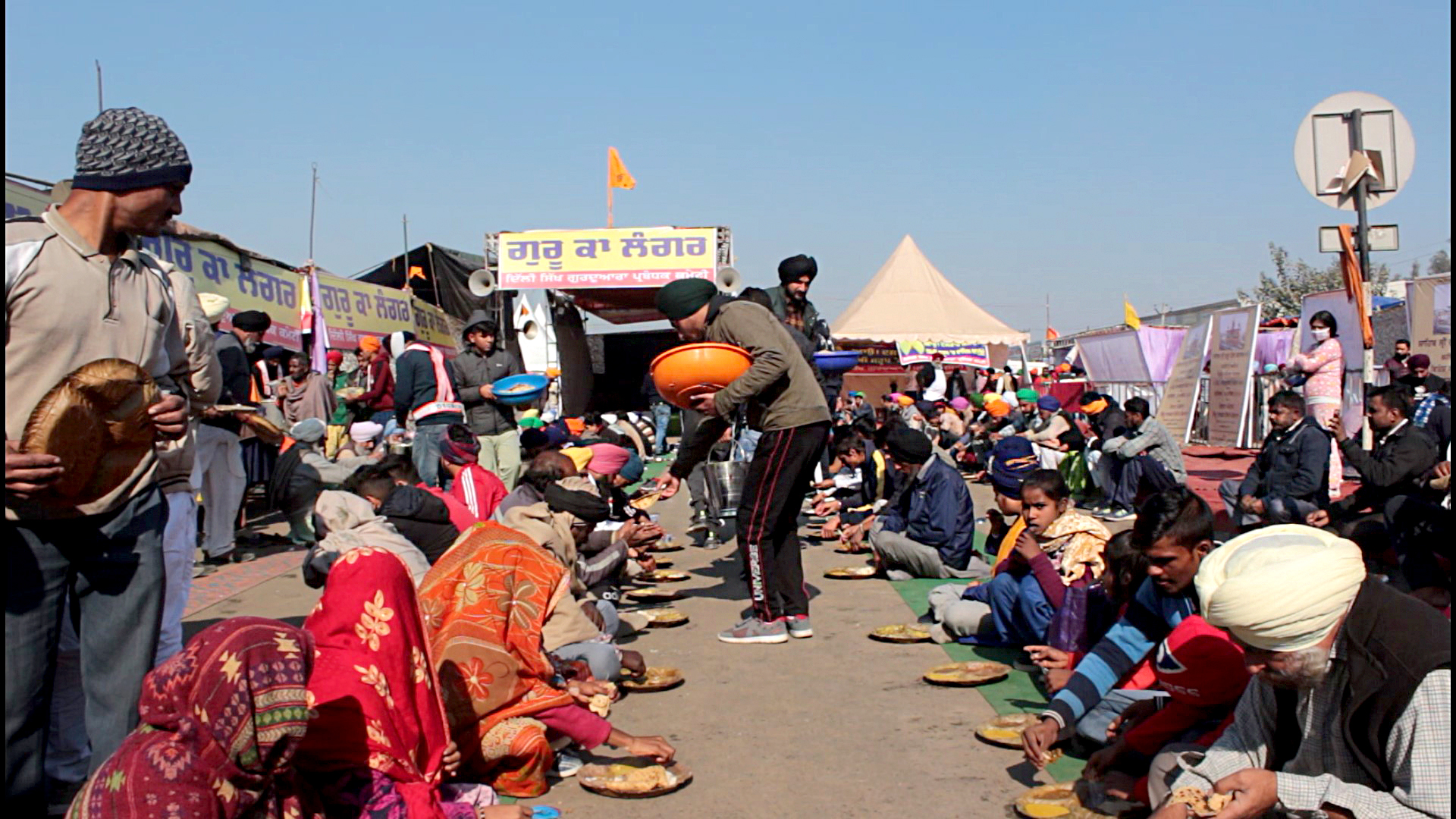 Volunteers feeding protesters at one of the community kitchens at the Singhu border in Delhi. (Danish Pandit)

DELHI, India — Since farmers started protests against three farm laws at the borders of India’s national capital territory of Delhi over four months ago, 23-year-old Gurjot Kaur has been visiting one of the agitation sites every day with her family to do acts of service known as sewa.

Sewa has been canonized in Sikh scriptures and followed by members of the community, which is miffed with the government’s September 2020 move to deregulate the agricultural sector. In hopes that the fight will protect farmers’ income and lands, many Sikh families like Gurjot’s and other volunteers have kept the protests alive by throwing open langars, or community kitchens, as part of their sewa.

“Every morning, I travel almost 30 kilometers (18.7 miles) with my parents to reach Delhi’s Singhu border,” Gurjot, who began contributing five days after the protests began on Nov. 26, 2020, told Zenger News.

“Sewa could be chopping vegetables, kneading dough for chapatis (flatbreads), or serving food,” said Gurjot, who has prepared more chapatis and served more meals than she can count.

“We head back home only in the evening,” said Gurjot, who graduated from the University of Delhi while serving the protests.

“My father works with the Majnu Ka Tila Gurdwara [worship place of the Sikhs] Committee. We stay on the gurdwara’s premises,” she said. 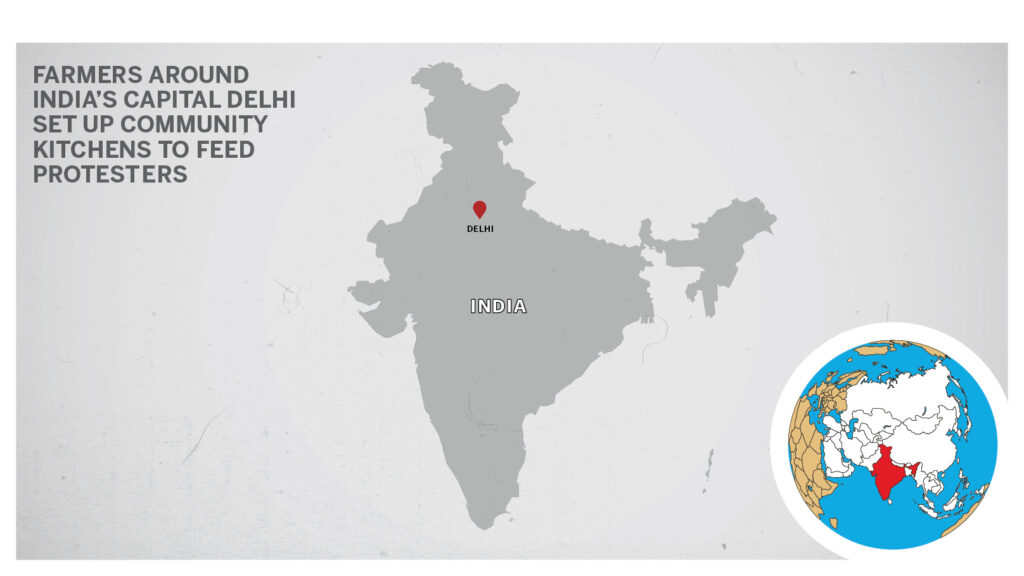 Gardeep Singh, a volunteer with the Gurdwara Sis Ganj Sahib Committee 16 miles (26 kilometers) south of the Singhu border, shows off a mechanical dough mixer the gurdwara moved to the border site.

“Chapatis from this much dough feeds at least 150-200 people,” Gardeep told Zenger News, his hands covered in a thick layer of flour.

He is happy serving the protesters and staying in one of the temporary settlements at the Singhu border while his “family is in Gurdaspur [a small town in India’s northern state of Punjab].”

Like Gurjot, Gardeep cannot quantify his labor. They don’t want to. In Sikhism, the surnames, Kaur for women and Singh for men, act as symbols of equality. Kaur translates to lioness and Singh lion.

The farmers — camped in and around the highways connecting Delhi to other parts of the country — will not end their agitation until the laws are withdrawn. The laws purportedly aim to break the monopoly of government-run marketplaces, allowing cultivators to sell directly to private entities. The implementation of the laws was stayed by India’s Supreme Court until an appointed committee looks into protester grievances and submits a report

At these sites, all one can see from a distance are miles-long canopies of tarpaulins — blue, green, red and yellow — housing thousands of protesting farmers and lines of community kitchens.

Some of the farmers took up a fight against the government, laying siege to the Red Fort on India’s 72nd Republic Day on Jan. 26. While many from the Sikh community condoned the events, they continued the langars.

The langar borrows its custom from the teachings of Guru Nanak Dev, the first Sikh Guru. The convention, initiated in the late 1400s, continues to form an integral part of Sikhism.

“There is the story of the ‘Saccha Sauda’ [true bargain] associated with Guru Nanak Dev,” Ganeev, who works with the Partition Museum in Punjab’s Amritsar, told Zenger News.

“Guru Nanak’s father gave him INR 20 [27 cents] to do a sauda or to trade and make money out of a good, which he could maybe sell further. Guru Nanak used the INR 20 to feed some sadhus [ascetics] he found. And, he felt this was the ‘Sachcha Sauda’.”

Ganeev says the concept of langar, which began with Guru Nanak Dev, was institutionalized by Guru Amar Das [the third among 10 Sikh gurus] in the form of “Pangat before Sangat.”

“So, you sit in a line and have langar. You come with humility and have the food with everyone, irrespective of caste, class, or religion,” Ganeev said.

Keeping the centuries-old tradition alive, several groups have voluntarily set up langars at the demonstration sites. At the Singhu border alone, volunteers at multiple stalls serve over 50,000-60,000 people every day.

“Over 70 people perform tasks such as making chapati, dal (cooked lentils), and serving food to protesters,” Sukhwinder Singh, who manages one of the stalls at the Singhu border, told Zenger News.

Each protest site consists of four, five or even more langar setups. Funds come through donations from the members of the close-knit Sikh diaspora residing across the world from the U.S. and Australia to Singapore and Canada — many of whom trace their roots to Punjab’s farming families.

While feeding protesters and homeless bums, the community kitchens have also generated income for sections of the urban poor and day laborers most affected by the pandemic.

“We are working here as daily wagers,” Ruksana, a woman in her mid-twenties, told Zenger News while peeling a heap of onions for the next langar.

“We earn INR 300 ($4) a day. We have been working here since the companies [that employed us] shut after the pandemic-induced lockdown.”

While INR 300 might not be a significant amount, even for a country like India where a large section of the population is living under the poverty line, it would feed Ruksana and her two children.

Ram Lakhan, another day laborer from Agra in the northern state of Uttar Pradesh, was seen stirring oil in a giant cauldron with some dough dumplings.