Tony Harrison Set To Lace Up His Gloves Again

The Detroit native aims to put a tragic 2020 behind him and prove he's still one of the best 154-pound boxers around.
By Percy Lovell Crawford April 16, 2021
Facebook
Twitter
Linkedin
Email 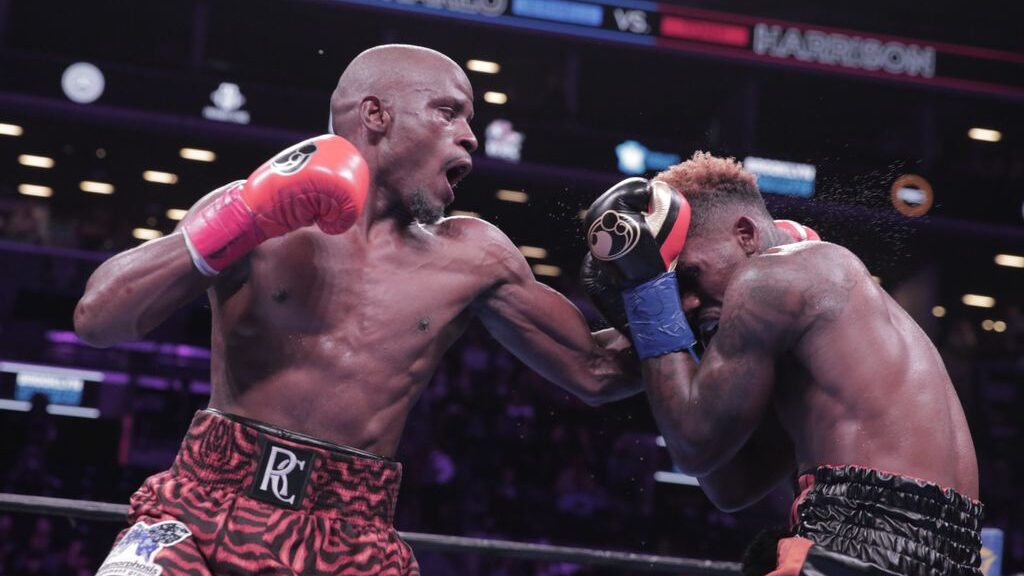 Tony Harrison throwing a left hook to the head of Jermell Charlo in their first bout in 2018. (Leo Wilson/Premier Boxing Champions)

Last year was a difficult year for most. The spread of the pandemic brought the world to a screeching halt.

For former junior middleweight boxing champion Tony Harrison, the pandemic claimed the life of the man who taught him his craft: his father, Ali Salaam. As Harrison prepares for his upcoming bout against the tough-as-nails Bryant Perrella, he continues the path his dad would want: becoming a world champion again.

That first step on that journey starts April 17 on Fox Sports. Perrella won’t be an easy test for Harrison, and Harrison doesn’t want easy. He prefers to go up against the best in the division and see what he has left since hitting 30.

Harrison is fighting for everything that he lost last year and wants to display his timing and conditioning, have survived two grueling bouts with Jermell Charlo in 2018 and 2019, respectively. Harrison enters this bout 28-3-0 with 21 knockouts, while Perrella is 17-3-0 with 14 knockouts.

Zenger News goes toe-to-toe with the Detroit native to discuss his difficult 2020, his preparation for the Perrella fight, and the work he puts in with kids in his Detroit gym.

Zenger: You’re coming off about 23 rounds with Jermell Charlo and a long layoff. Is a blue-collar, durable guy like Bryant Perrella the type of fight you need now?

Harrison: I honestly think that’s almost the perfect fight. I couldn’t have asked for someone better or tougher, who will be gamer than Perrella. Only difference is, I would’ve chosen an orthodox fighter instead of a southpaw, but I can only take what they give me. And I can only fight who wants to fight me. Perrella was man enough to step up to the challenge.

Zenger: I understand boxing isn’t built off moral victories, but you did show a lot in both Charlo fights, including where you came up short. Is the key to just build from the momentum gained in those fights?

Harrison: I don’t hold moral victories over my head. I didn’t win. For me, I just want to keep competing with the top guys. I don’t want to fight nobody but the top guys — and show the world why I feel like I’m the best 154-pounder out there.

Zenger: You had a very rough 2020, losing your father and trainer to COVID-19. Is this good timing for your return to the ring?

Harrison: It’s an amazing time. I think Al [Haymon] did a good job of scheduling the fight with the right opponent. Last year was mentally exhausting for me. The layoff was just enough time to rejuvenate myself and find the fire to come back in the ring and do exactly what I love doing.

Zenger: Many times, as black men, we don’t let those emotions out after a tragedy. Have you been able to?

Harrison: It’s never enough time to get over losing my father. That was my guy. I’m not an emotional guy. My dad made me, I swear to God, as strong as any man there is in the world. No matter how big, how tall or what kind of wars they have been in, my dad made me as strong as any other man. At this moment, I know he would have told me: “Get your ass up, it’s time to get back to work.” And that’s what we’re doing.

Zenger: There was a lot of animosity between you and Jermell Charlo. You don’t have that same animosity towards Perrella. Do you need that or are you at a point in your career where that’s not necessary to get motivated?

Harrison: I don’t ever need that, man. I just think it makes for a better showing when I don’t like somebody, and they don’t like me. I’m 30 years old, and all the rah-rah and trying to fight before the fight, that’s over. There is no use screaming back and forth. We’re either going to do it now, at that moment, or we’re going to wait till the fight. From here on out, I’m just carrying myself like that.

Zenger: You’re probably going to say that he can’t fight for Bryant. But Bryant seems to think having Roy Jones in his corner will make the difference. Do you think that’s true?

Harrison: Roy can definitely not get in that ring for him. Somebody sent me the video of him chasing a chicken, and he looked like a robot. So, once again, Roy, what you did, you have got to find that same guinea pig. You can’t turn a sheep into a lion. I’m proud of Roy for taking these guys and trying to mold them into great fighters, but it ain’t going to be on the 17th, that’s for sure. And I love Roy, bro. It will be good to see him on the opposite side of the ring and I get to hug him after I display what I got to display, and maybe he’ll come on my side next.

Zenger: It’s some time since we have seen you in the ring. What are you looking to showcase on the 17th?

Harrison: I’m looking for my timing to be right, my head movement to be good, my hand speed to be right. I’m looking to get as many rounds as I can honestly. Sixteen months is a long time. If I can finish the fight, I will finish it for sure, but if I don’t see it, I have no problem going the distance. That’s a question that I ask myself, ‘Could you go those rounds that you always fade in, like everybody say you fade in?’ I’ll be OK with going the rounds and displaying the talent.

Zenger: Given the time off, due to COVID, is it imperative to get rounds in to ensure you’re still sharp, as opposed to gunning for a quick knockout?

Harrison: Nah, if I could stop him in one round, I’m getting him the hell out of there. I’d rather go in there and take my time and dismantle somebody in a manly fashion, where I still look sharp, look fundamentally sound, and you’re still Tony Harrison.

Zenger: I feel you don’t get enough credit for your work with kids in your gym and around Detroit. How important is using your star power to give back?

Harrison: That’s where my heart is. My gym is made up almost completely of kids. Just to be able to mold them, not to be a fighter, but to be stronger than they were before they walked in, that’s what we do. My gym is in an impoverished zone, where there’s nothing else around. The community loves it, and every season we try to do something for everybody in the community: free food giveaway, free clothes giveaway, back-to-school giveaways. We try to do stuff in the community that no one in the city acknowledges, but we know we’re doing it.