Spotlight On Kumbh Festival As India Clocks 200,000 Covid Cases In A Day

The Indian government has refused to cut short the event. 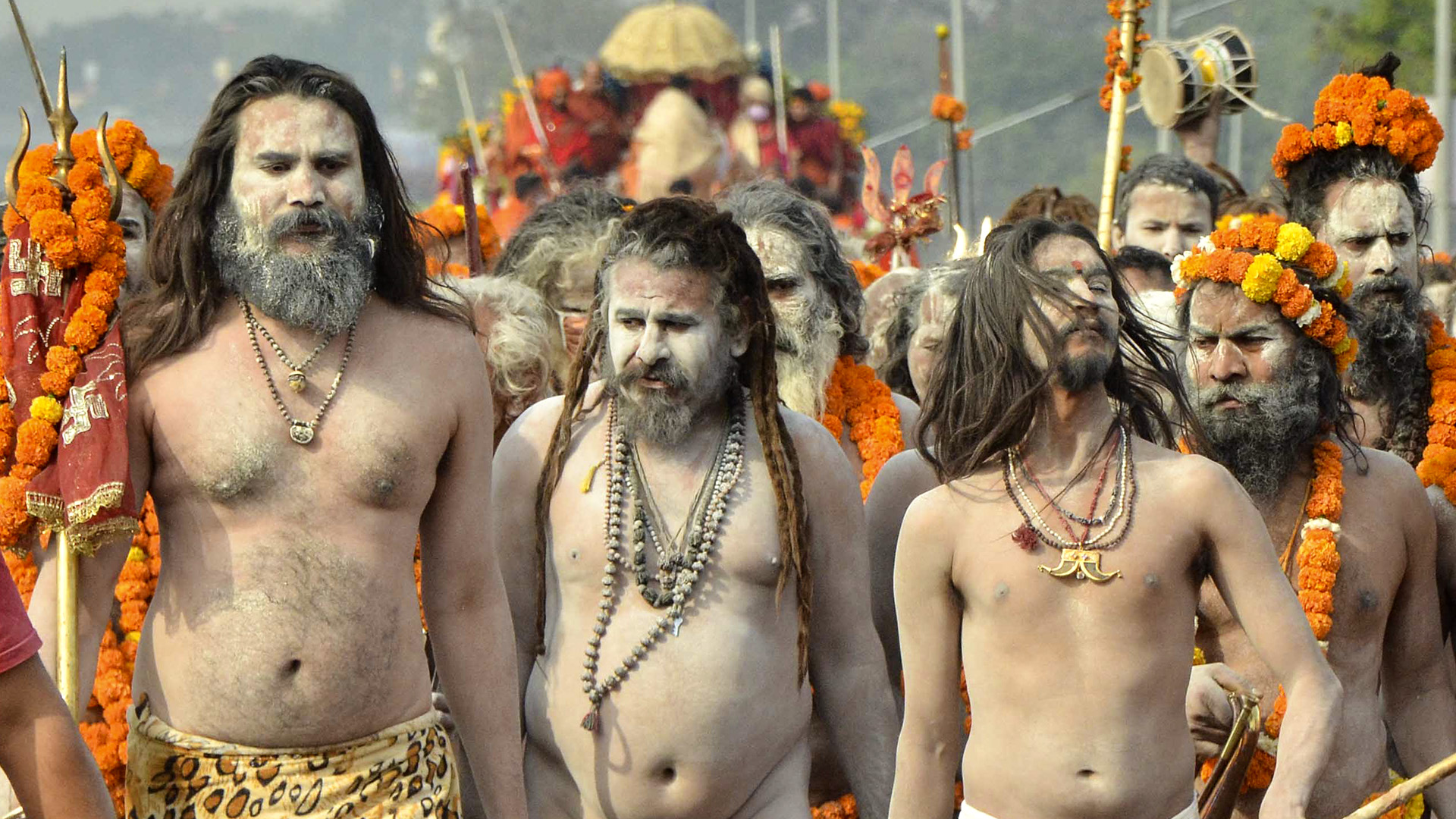 Ash-smeared ascetics congregate on the banks of the river Ganga for the Kumbh Mela in Haridwar. (Rameshwar Gaur)

NEW DELHI — India — the second worst-affected country by Covid-19 — is hosting the largest pilgrimage on earth, the Kumbh Mela, where millions of devotees and ash-smeared ascetics have congregated to take a dip in the river Ganga. The ritual is believed to wash away sins and free people from the cycle of birth and death.

“Maha Kumbh happens once in 12 years, and there was no way I could miss it,” Mundarika Sharma, a resident from Muzaffarpur in India’s eastern state of Bihar, told Zenger News.

The elderly woman, sitting at a temple compound in Haridwar, a city famous for its religious sites in the mountainous state of Uttarakhand, says she has traveled to Kumbh Mela thrice and did not want to miss out on the fourth this year. 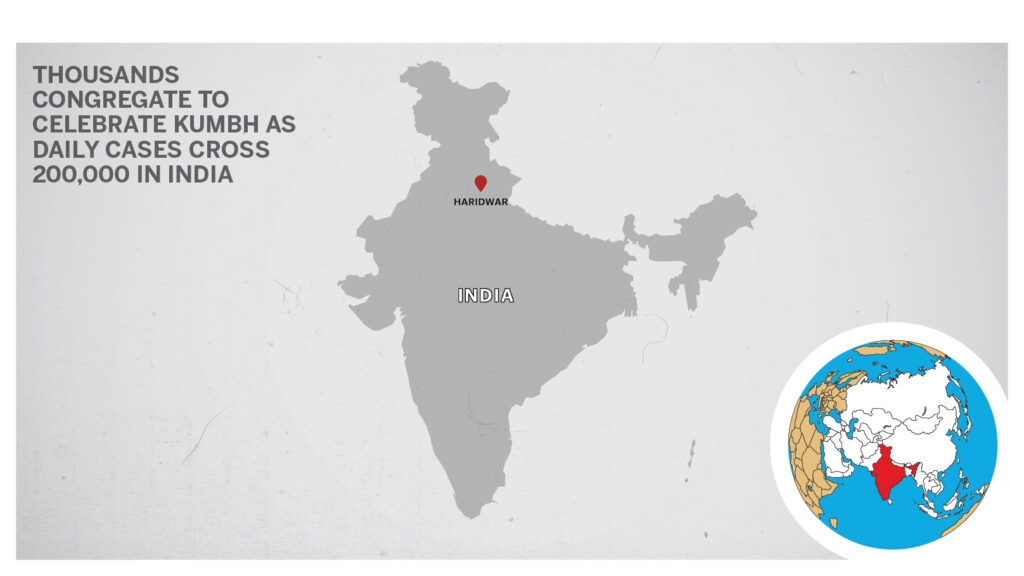 “I do not fear [Covid-19], and we had already booked our tickets,” Sharma said through her face covering. “We don’t go out a lot, just for the holy dip. We don’t go near crowded places.”

While Sharma has received the first shot of the vaccine and is taking precautions against Covid, the general trend at the ‘festival of the sacred pitcher’ is otherwise.

Images of millions of visitors and pilgrims thronging the city of Haridwar, taking dips in the river — bare-bodied and without masks — have flooded media.

“The Covid-19 situation in India is not supposed to be a blame game, a political battle, or a policy pandemonium,” tweeted Bhramar Mukherjee, a professor of Epidemiology and Biostatistics at the University of Michigan.

However, some members of India’s ruling right-wing Hindu nationalist Bharatiya Janata Party believe “the faith in Hindu gods will prevent the pilgrims from contracting the virus.”

“In today’s shahi snan (royal bath), lakhs of saints and common people took a holy dip to earn blessings,” tweeted Tirath Singh Rawat, chief minister of Uttarakhand. “It is estimated that about 3.5 million people will participate till the completion of the event.”

Random testing at the event site in the past five days added over 1,700 Covid-19 cases to India’s total count, escalating fears that the congregation would lead to a rapid rise in the caseload. Police officials are struggling to put in place safety guidelines because of massive gatherings on the banks of the river.

The central and state governments are receiving widespread criticism for their refusal to cut short the festival, which is scheduled to continue till April 30. India is facing one of the strongest second waves of the pandemic.

But all claims of random testing and other measures to prevent the spread may not be correct.

“We faced no issues in coming here, and there was no checking,” Ratan Lal Telli, a pilgrim from Bhilwara district in the north-western state of Rajasthan, told Zenger News.

“Only the cops asked us to put on our masks, so I took mine out of my pocket and put it on. No one asked us for any negative RT-PCR reports. And, there is no fear [of Covid].”

Another tourist who goes by the name of Amit told Zenger News there might be guidelines, but they aren’t being followed. He took a flight from the western city of Ahmedabad to Uttarakhand’s capital Dehradun and hired local transport to reach Haridwar.

“We got tested before coming and thought the reports would be checked at the airport,” Amit said. “But no one checked them. No one is checking local cars, too. Near the venue, though, there is tight security, and authorities are distributing masks.”

Ramakant Thakur, who reached Haridwar by train from capital city Delhi, however, says his test reports were seen. He reached the city on April 9, the day the Kumbh Mela began.

“I don’t fear [Covid-19] but have been taking precautions,” Thakur, who hasn’t taken a vaccine shot despite being eligible, told Zenger News. “Doctors and medical teams are doing random tests.”

The government has come under fire for selective Covid-19 restrictions.

In May 2020, a Muslim missionary gathering of around 1,000 people in Delhi had led the authorities to launch a manhunt. First Information Reports were filed against the members of Tablighi Jamaat, a contemporary Muslim transnational movement that exhorts Muslims to return to practicing the religion the way it was practiced at the time of the Prophet Muhammad.

The Bombay High Court in August 2020 quashed the First Information Reports stating, “there was big propaganda in media against the foreigners who had come to Markaz Delhi, a mosque located in the national capital, and an attempt was made to create a picture that these foreigners were responsible for spreading Covid-19 in India”.

“A government tries to find the scapegoat when there is a pandemic or calamity, and the circumstances show that there is a probability that these foreigners were chosen to make them scapegoats,” notes the judgment.

Uttarakhand’s chief minister believes comparing the Markaz with Kumbh is not right.

“The Markaz was held in a closed space, whereas the Kumbh is being held in the open,” Rawat said to the local media. “Most importantly, Kumbh is at the bank of the river Ganga. Maa Ganga’s blessings are there. So, there should be no corona.”

Niranjani Akhara, one of the 13 ascetic groups participating in the festival, however, called upon seers to leave the gathering by April 17 amid reports of many saints testing positive and the leader of Nirwani Akhara dying of Covid-19. Another group, Juna Akhara, also said they would exit the festival. Each group consists of lakhs of seers.

It is attested in Hindu mythology that God Vishnu wrested a golden pot containing the nectar of immortality from demons. In a 12-day fight for possession, four drops fell to earth in the Indian cities of Prayagraj in Uttar Pradesh; Haridwar in Uttarakhand; Ujjain in Madhya Pradesh; and Nashik in Maharashtra.

The Kumbh Mela alternates between these cities every three years, with the Maha Kumbh held every 12 years. A Great Kumbh Mela festival is held every 144 years at Prayag, most recently in 2001.

The Kumbh Mela’s celebration is based on a distinct set of astrological positions of the Sun, the Moon, and Jupiter, the holiest time occurring at the exact moment when these positions are fully occupied. The Kumbh Melas have three dates around which most pilgrims participate, while the festival lasts from one to three months.