Slipped Through The Cracks: Stories, Hopes And Struggles Of Combat-Blinded Veterans

Thousands of war veterans are suffering from combat-induced vision loss. 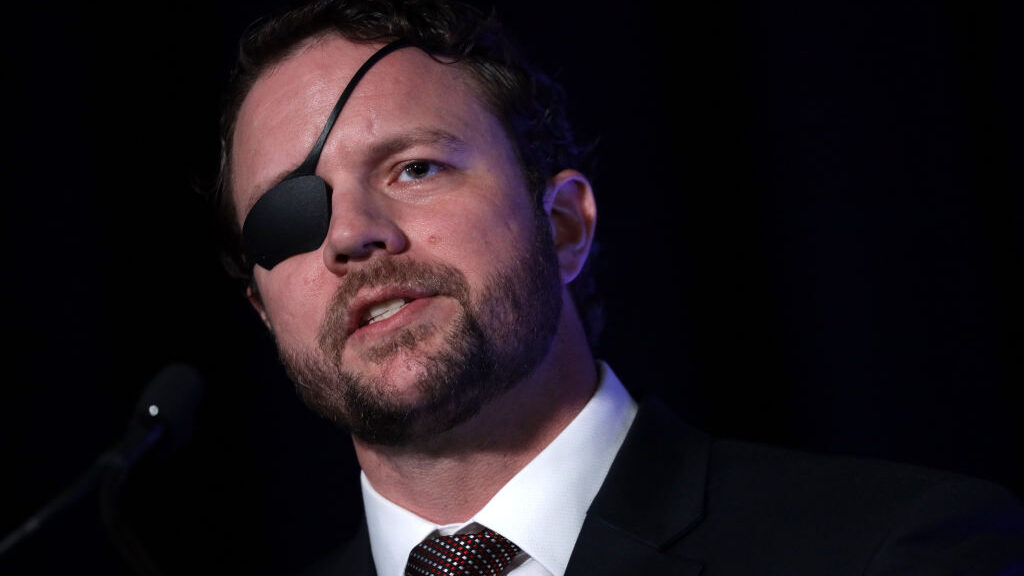 An April 12 announcement from former Navy SEAL and House Rep. Daniel R. Crenshaw (R-Texas) that he must lie “face down for the next week or so” to stop the retina detaching in his one remaining eye has shone a spotlight on a niche demographic of combat-injured veterans.

Over the weekend, Crenshaw shared that he had undergone an emergency procedure to address retinal detachment in his left eye, only days after National Blinded Veterans Day.

“I am sorry to inform everyone that I will be pretty much off the grid for the next few weeks,” Crenshaw wrote, explaining he had been seeing dark and blurry spots. “I went to get this checked out by an ophthalmologist on Thursday and they discovered that my retina was detaching.”

“This is a terrifying prognosis for someone with one eye,” he added. “Anyone who knows the history of my injuries knows that I don’t have a ‘good eye,’ but half a good eye.”

Crenshaw lost his right eye and suffered extensive damage to his left due to the blast from an improvised explosive device while deployed in Afghanistan in 2012. The second-term Republican said Department of Veterans Affairs doctors had “put a gas bubble” in his eye in an effort to repair the retinal damage, but that the surgery had left him without vision for the next month.

“This is why you’re not going to hear from me for a while.”

Retinal issues usually occur due to aging, but they can also be triggered by blood-vessel problems inside the eye or from trauma to the head or the eye, such as the blast sustained by Crenshaw in Afghanistan, said Greg McGrew, an optometrist at Virginia’s Eyecare Center of Leesburg.

“The retina is a thin layer of nerve tissue that lines the inside of our eyeball, and if it comes unattached from the outer layer of the eye, that is what we call a retinal detachment,” McGrew told Zenger News, adding that treatment options varied according to the extent of the damage.

“Smaller breaks in the retina can sometimes be sealed up with a laser or freezing probe. Some repairs are done by injecting oil into the eye, which pushes the retina back into place where it seals itself back into place,” he said. “Larger detachments require complex micro-surgical repair.”

Although Crenshaw’s public profile garnered him national attention following the announcement, he is just one of thousands of American veterans dealing with blindness or vision loss due to combat injuries. The Department of Veterans Affairs estimates that approximately 130,000 veterans in the United States are legally blind and that more than a million have low vision.

Among them is Donald Overton, executive director of the nonprofit Blinded Veterans Association.

Serving with the Army’s 82nd Airborne Division during the Gulf War’s Operation Desert Storm in Iraq in 1991, Overton was hit by a buried piece of unexploded ordnance that detonated. As a result, he lost a hand and was left blind in one eye and legally blind in the other. In time, though, even his remaining vision will be lost to tissue rejection, surgical deterioration or the effects of aging.

“I kind of remember the blast itself,” Overton told Zenger. “I remember everything going dark. I remember the initial medevac to the first field hospital and then being loaded onto a helicopter and getting medevaced back. Of course, I was totally in the dark throughout that entire process.”

“My next recollection was briefly waking up in Landstuhl, Germany, and then back into a medically-induced coma, checked into Walter Reed [hospital], and subsequently waking up some period of time later after having undergone some extensive reconstructive surgeries.”

Overton remained on active duty for a brief period following his injury, he explained, before being medically retired. Once out of the military, though, he faced a new set obstacles — the bureaucracy of getting his disability claim adjudicated by the Department of Veterans Affairs.

He eventually found “phenomenal” support programs, he said. “But that was a multi-year journey.”

In his work with the Blinded Veterans Association, Overton now helps connect veterans suffering from eye damage with the services available to them from the VA and Department of Defense.

However, he said many blinded veterans can inevitably “slip through the cracks” of a vast bureaucracy.

“We as an organization … have the unique opportunity and great relationships with Defense Health and with different entities, and so we can usually find out when we’ve got [new] ocular trauma individuals, and we try to get there and make sure that we bridge those gaps,” Overton said.

“But, such as myself, we’re not perfect,” he added. “We still miss individuals as well.”

Thomas Miller, a Vietnam War veteran who completely lost his vision after stepping on a landmine while serving with the Marine Corps in 1967, has watched the steady evolution and improvement of the systems put in place to help support combat-blinded veterans over the decades.

After retiring in 1968, he received help from the VA’s only Blind Rehabilitation Center at the time.

Miller developed independent mobility skills at the center and went on to work for the VA, as well as the Blinded Veterans Association. In the years since, though, he said he has also had to keep-up with and adapt to ever-changing technology as accessibility innovations have emerged.

“There’s a myriad of services and benefits that are available through the Department of Veterans Affairs that weren’t there even for the World War II vets, let alone Vietnam,” Miller told Zenger News. “The technology that’s available today, I always have to chuckle about it a little bit.”

“Now we’ve got computers and iPhones and all kinds of devices that give us access to information and material that we otherwise wouldn’t have unless it was recorded,” he said.

He today uses an iPhone to email and communicate and enjoys listening to audiobooks — but he said learning to use such technology was not necessarily “a piece of cake” for older veterans.

“The current generation of war-blinded or visually impaired [veterans] from Afghanistan and Iraq — all these guys are young, and they all used computers and were technology-literate,” Miller said. “But for us older guys, I kind of got dragged into computers kicking and screaming.”

Timothy Hornik is one of those younger veterans who had an easier time adapting to technology.

Serving in the Army from 2002 to 2011, Hornik was deployed to Iraq in 2004 during Operation Iraqi Freedom and was injured by a sniper shot that severed the optic nerve in his left eye. His right eye was the exit point, but military doctors in Baghdad were able to restore some of his sight.

Since then, he has undergone several surgeries. Each has left his remaining sight diminished.

“I’ve always been a high-end tech user,” he said. “So, me learning all of that, that was no problem.”

For Hornik, who now works at the VA, the most challenging obstacle in the wake of his vision loss was “accepting myself and acknowledging that, hey, life’s not that bad, and life will keep moving on.” Dealing with this “internal, introspective stuff” was the hardest part of adapting to a life as an injured veteran, he explained, “but it’s also been the most rewarding once you’re able to figure it out.”

“The Army views — well the military in general — anyone with injury that can’t do their wartime mission is always viewed as ‘broke’ or some other negative term, and you know, you get brought up with that,” Hornik said, adding that he had been in a bad headspace for about four years after his injury.

“There’s not a whole lot of us blind folks out there, especially on the veteran side of things. It is one of the more traumatic and jarring type of injuries you can anticipate because — nothing against losing limbs, but you can still function pretty well without limbs. But you take away sight, or you take away hearing, you’re pretty much screwed … in communicating with the world.”

Severe eye injuries are not the most common cause of blindness or vision impairment in the general population, according to Dr. McGrew of the Eyecare Center, “because the eye is pretty well protected by its position in the skull and below the brow.” However, data indicates that eye injuries have accounted for nearly 15 percent of battlefield trauma sustained in Afghanistan and Iraq.

Additionally, traumatic brain injuries, which affected more than 400,000 service members between 2000 and 2019, have caused visual dysfunction in as many as 75 percent.

Eye trauma and visual impairment among service members is also likely to increase as modern warfare tactics continue to develop, according to Overton at the Blinded Veterans Association.

“[The eye] is the most delicate organ that we can’t protect,” Overton said. “You know, when we think about battle armament and body armor and what we try to do, the best we can do in any situation is a goggle approach … and the ballistics on those just aren’t great.”

The Department of Veterans Affairs now operates 13 Blind Rehabilitation Centers, which include training programs that help veterans adjust to their blindness. The department also operates dozens of clinics to help those with low vision and offers a variety of rehabilitation services.

Technological innovations have also continued to provide many accessibility options, and the use of guide dogs and prosthetics among visually impaired veterans is common. Many veterans are also able to receive support at private facilities in their areas without having to travel.

Still needed, though, is more research into eye injuries, with most vision studies conducted by the National Institutes of Health and the National Eye Institute not specifically focused on eye trauma. The only government ocular trauma research, meanwhile, is conducted by the Department of Defense, and is severely underfunded, according to the Blinded Veterans Association.

More funding for more research could lead to the development of restorative and regenerative treatments that may better preserve or restore the vision of those who suffer eye trauma.

In addition, the Blinded Veterans Association has advocated for increased funding for the Joint Ocular Trauma Task Force, created in coordination with the United Kingdom, and a more strategic approach to eye care, including the establishment of four specialty ocular-trauma centers.

Another major need is community acceptance of blindness and additional mental health services, which are currently “patchwork at best,” the group says. This would help veterans dealing with depression, anger and psychological trauma stemming from their vision loss, Hornik said.

“A larger semblance of community between the veterans themselves, the general blindness community, and more importantly, those who are providing the rehabilitation services for blinded veterans [is needed] because there’s nothing more isolating than blindness,” the Iraq War veteran said. “Communities need to come together on all levels to accept blindness.”

“We’re not going to be able to have people that accept the white cane or dogs or talking devices until they can accept themselves for who they are. This is what they need to move forward.”