The shooting, which has left eight dead, comes amid President Biden’s campaign to push new gun legislation through Congress. 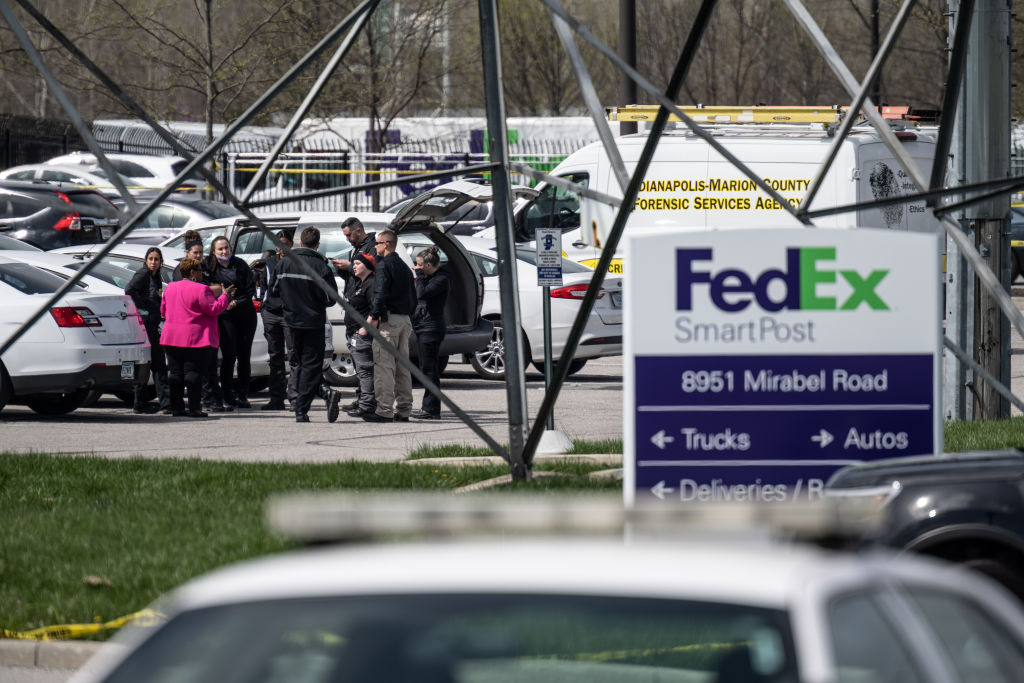 Crime scene investigators speak in the parking lot of a FedEx Ground Facility in Indianapolis on April 16, the scene of a mass shooting that has left at least eight people dead. (Jon Cherry/Getty Images)

The former FedEx employee began shooting in the parking lot of the delivery company’s distribution center near Indiana’s largest airport before continuing into the building, early reports said, and later shot himself dead. He had reportedly been questioned by the Federal Bureau of Investigation last year after his mother told police she was worried her son would “commit suicide by cop.”

In a press conference on Friday morning, Indianapolis Mayor Joe Hogsett told reporters that the authorities did not yet know the man’s motives in carrying out the mass shooting. But he said that the incident was a tragedy for the community.

“Indianapolis was revisited by the scourge of gun violence that has killed far too many in our community and in our country. Although we will learn more from this case in the coming days and in the coming weeks, no piece of information will restore the lives that were taken, or the peace that was shattered,” Hogsett said. “Nothing we learn can heal the wounds of those who escaped with their lives but will now bear the scars, and endure the memories, of this horrific crime.”

“What we are left with this morning is grief,” he said.

Vice President Kamala D. Harris, who was welcoming Japanese Prime Minister Yoshihide Suga to the White House late in the morning, echoed Hogsett’s sorrow that America was once again confronted by a mass slaughter of civilians.

“Yet again we have families in our country that are grieving the loss of their family members because of gun violence,” Harris said. “There is no question that this violence must end, and we are thinking of the families that lost their loved ones.”

He noted it was “just the latest in a string of tragedies, following closely after gunmen firing bullets in broad day light at spas in and around Atlanta, Georgia, a grocery store in Boulder, Colorado, a home in Rock Hill, South Carolina, and so many other shootings.”

“It’s a mass shooting just a week after we met, in the Rose Garden, with families who lost children and dear friends as bullets pierced their bodies and souls in schools, a night club, in a car at a gas station, and a town meeting at a grocery store,” Biden added “And it came just the night before 14th anniversary of the shooting at Virginia Tech, in which a gunman murdered 32 people.”

The president also renewed his appeal from last week for the U.S. Congress to “hear the call of the American people — including the vast majority of gun owners — to enact commonsense gun violence prevention legislation.” He listed universal background checks, a ban on “weapons of war” and further restrictions on high-capacity magazines as priorities for Congress to address.

“Gun violence is an epidemic in America. But we should not accept it. We must act,” he said.

While high-capacity magazines were used to carry out high-profile mass shootings in recent years, including at Pulse Nightclub in Orlando, Florida, in 2016, and the Harvest music festival in Las Vegas in 2017, most gun homicides aren’t carried out using assault weapons.

Besides appeals for Congress to introduce new legislation to regulate firearm ownership, Biden’s executive orders last week made changes to 26 federal programs. They also included grants and support for community violence-prevention programs. Giffords, a group run by former House Rep. Gabrielle Giffords, says such programs have reduced homicides by as much as 60 percent where implemented.

The measures were announced as many U.S. cities have experienced a recent spike in homicides and violence, according to preliminary data collected from a subset of law enforcement agencies and released in March by the Federal Bureau of Investigation. Although firearm homicides have edged higher in the last few years, per-capita gun homicide rates are still below the soaring highs reached in the U.S. in the mid-1970s and mid-1990s, according to the Centers for Disease Control and Prevention.

However, the increasing frequency of mass shootings that have punctuated daily life for Americans over the past 20 years has spurred more vigorous campaigns for gun regulation, in particular within Biden’s Democratic Party.

Among the changes the majority of Americans favored were increasing background checks, banning high-capacity ammunition magazines, a 30-day waiting period, and requiring all privately owned guns to be registered with the police. However, the percentage of Republicans who support stricter gun laws has trended down, with Gallup reporting the lowest support in two decades at just 11 percent.

Biden has praised two bills passed in the House in March.

However, both face an uphill battle in the Senate, where they face opposition from the Republican Party.

Critics and gun-rights advocates have said Biden is moving too far and too quickly to introduce gun control.

Mark Oliva, director of public affairs for the National Shooting Sports Foundation, a firearm trade association, points to the president’s nomination of David Chipman to serve as director of the Bureau of Alcohol, Tobacco, and Firearms as a factor that is most troubling to the industry. Chipman previously served at the bureau for 25 years, and now works as a senior policy adviser at Giffords.

“He is a partisan politician with an agenda, and they are now putting someone who holds an avowed agenda to eliminate gun rights in America in charge of the organization that regulates gun manufacturers and retailers,” Oliva said.

“This is like putting [National Rifle Association chief] Wayne LaPierre in charge of the ATF.”

But Biden has been unmoved, and says that he also wants to see Congress repeal the 2005 Protection of Lawful Commerce in Arms Act, which shields gun manufacturers from lawsuits over people’s illegal use of their weapons, such as murder.

As part of Biden’s plan announced last week, the Department of Justice will also provide sample legislation for both federal and state-level “red flag” gun laws. “Red flag” laws allow family members or law enforcement members to petition a court to temporarily confiscate — or prevent access to — firearms for a person who they consider to be in danger of harming themselves or others.

Democrats have praised the proposal as necessary for public safety. However, Republican legislators and governors have said they will block such laws, which they say violate the Second Amendment and are accordingly unconstitutional.