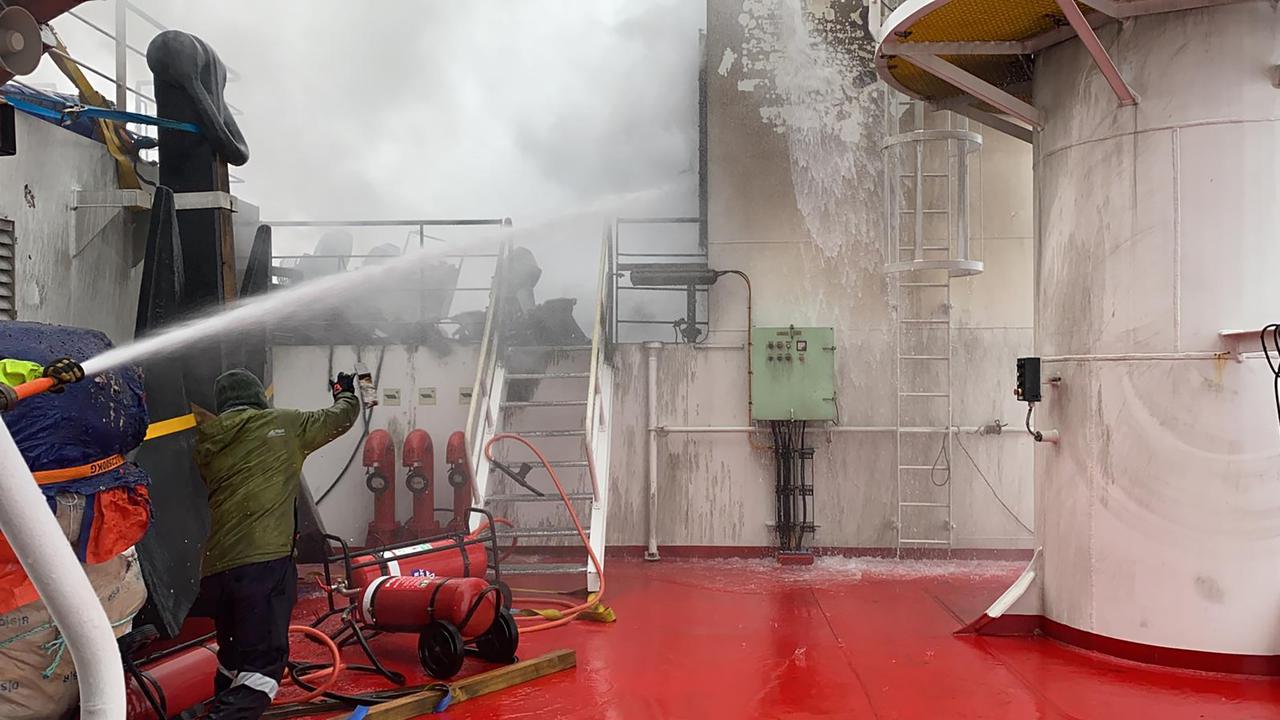 The MPV Everest, which was sailing on auxiliary power after a fire, has docked in Fremantle, WA. (Supplied by The Australian Antarctic Division/AAP Image)

The MPV Everest, sailing on auxiliary power after a fire tore through its port side engine room on April 5, reached Fremantle Port on April 13 (Tuesday) at 5:30 pm after completing 1,700 nautical mile voyage at reduced speed.

The chartered ship was originally supposed to dock in Hobart but was diverted following the blaze, which destroyed two inflatable boats on deck.

None of the 109 people aboard, including about 70 expeditioners, were injured.

Some of the expeditioners have been in Antarctica for almost 18 months, well beyond their scheduled stay, due to coronavirus, which played havoc with transport plans.

“When they left Australia, there was no COVID-19. They’re coming back to quite a different and changed world,” Charlton Clark, operations and safety manager Australian Antarctic Division said.

A support ship was sent from Fremantle to rendezvous at sea on April 13 with the Everest, which had taken a northern route to dodge bad weather in the Southern Ocean.

The expeditioners have had flights out of Western Australia arranged for them over the next few days.

But the crew, who have been operating the ship since October last year, will have to remain on-board or go into quarantine.

“While the expeditioners will be able to leave the vessel and go home to the support of friends and family, the crew will remain stuck in Western Australia, until the future of the damaged vessel is known,” Ian Bray, the coordinator for the Australian branch of the International Transport Worker’s Federation, said.

“We are extremely concerned that the crew will be isolated in quarantine or forced to remain on-board the vessel, far from the help they need, adding to their serious mental anguish.”

The fire — which occurred four days into a two-week journey — is being investigated by the vessel’s Dutch owners, the Maritime Safety Authority, and the Australian Transport Safety Bureau.

The Everest had been charted for this summer’s resupply trips after the delivery of Australia’s new AUD 529 million ($406.68) icebreaker RSV Nuyina was delayed due to COVID. It had completed stops at the Davis and Mawson research stations in Antarctica.

RSV Nuyina is one of the most advanced vessels of its kind and was to be the centerpiece of the Australian Government’s Antarctic Strategy and 20 Year Action Plan. It can carry 117 expeditioners, 1200 tonnes of cargo, and 1.9 million liters of fuel. It will be the main lifeline of Australia’s Antarctic and sub-Antarctic research stations for decades.