In addition to the massive amount of money and materials needed, finding skilled artisans is a challenge. 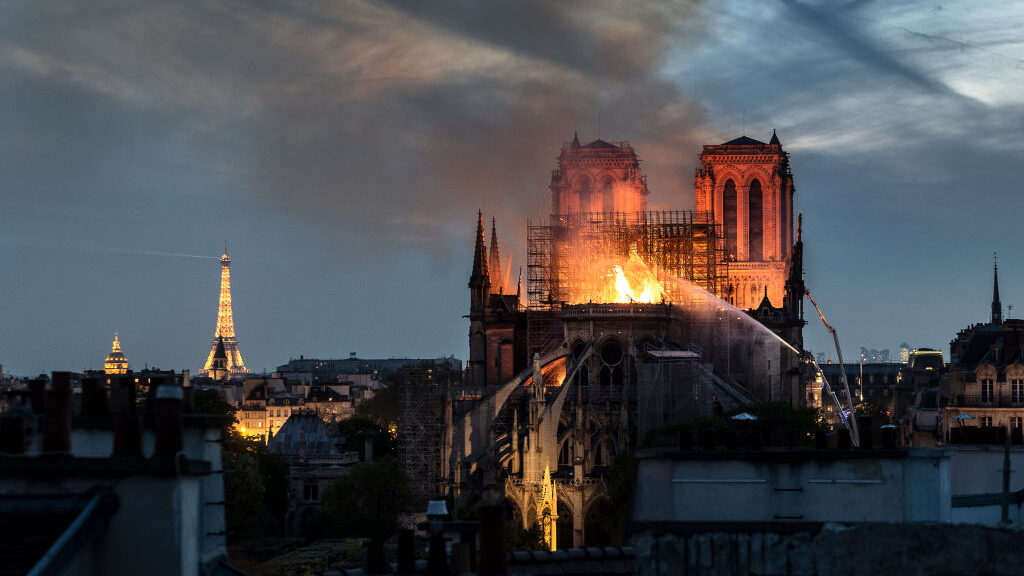 Flames and smoke are seen billowing from the roof at Notre-Dame Cathedral on April 15, 2019 in Paris, France. A fire broke out in the afternoon and quickly spread across the building, collapsing the spire. (Veronique de Viguerie/Getty Images)

The April 15, 2019 fire that tore through Notre Dame de Paris was devastating — in artistic, religious and historic terms. The upper part of the famed cathedral was partially destroyed and the cleanup, prior to any restoration work, has been slow and deliberate.

“We will rebuild Notre Dame even more beautifully, and I want it to be completed in five years,” French President Emmanuel Macron said in a televised address to the nation a few days after the fire. But that hope may be quixotic.

Medieval restoration experts and French officials have called his timeline unrealistic, estimating it could take 20 years to fully rebuild the roof, spire and stone vaulting.

Krupali Krusche, an associate dean at the University of Notre Dame School of Architecture and an expert on historical preservation, estimated when the fire happened that costs could rise to $1 billion.

In the last year, the charred remains of the wooden frame and metal scaffolding around Notre Dame Cathedral has been removed.

The reconstruction of the historic church has been slowed by various factors, including bad weather, lead pollution caused by the toxic smoke of the burnt roof, which may be harmful to visitors and workers on the site, and the coronavirus pandemic, which halted rebuilding efforts for several months.

The rebuilding itself will be an engineering feat. It’s a step-by-step process requiring specific expertise.

The scaffolding, surrounding the boom at the time of the fire, weighed 220 tons. Some 40,000 metal tubes, half of which were over 131 feet high and melted by the heat, were removed in November 2020.

As the melted scaffolding was removed, workers wrapped up the holes in the vaults in an umbrella at the crossing of the transept to keep water out of the area where the roof used to be. They will also continue to consolidate the crossing vault and work on the installation of internal scaffolding about 288 feet high in the choir, transepts and nave.

An important operation that started in March marks the consolidation of the six most fragile vaults by the installation of wooden hangers. The security phase of the building will end in the summer of 2021 and has a budget of 165 million euros ($197 million).

At the same time, the disposal of the remains, the cleaning, and the suction of the four adjacent arches of the crossing transept, which was cleared of the damaged scaffolding, have been completed.

The grand organ, with its 8,000 pipes distributed in 115 games, the largest such instrument in France, was disassembled after miraculously surviving, but it was covered with lead dust that spread throughout the instrument. Some parts suffered from the thermal variations since the fire, especially during the July 2019 heatwave.

It required a thorough cleaning and restoration, which cannot be done onsite, said the Rebâtir Notre Dame de Paris, a French public office charged with the reconstruction. Carried out under the supervision of Christian Lutz, an organologist and consultant for historical monuments, the large organ removal operation, which ended on Dec. 9, involved 11 organ builders.

The restoration project has not started, but two major operations were carried out first.

A site test was conducted on two chapels — Saint Ferdinand and Our Lady of Guadalupe — to define a cleaning and restoration protocol that will be extended to all 24 chapels. And 1,000 oaks will be harvested for the restitution of the arrow, transept and adjacent spans to ensure authenticity.

Half of the oaks will come from public forests — 32 state forests and 70 communal forests — while the other half will come from nearly 150 private forests. The first-centuries-old oaks to be used for the reconstruction of the spire of Notre Dame de Paris Cathedral were selected on March 5 in the forest of Bercé. The wood will then be stored for 12 to 18 months to reach a humidity level of less than 30 percent before being made available to carpenters.

Eight oaks with a diameter of more than 3.2 feet and more than 65 feet long with a specific curvature were cut down to make exceptional pieces for the stool of the spire.

Stone elements were also damaged in the fire.

The original stones were waxed limestone rocks, a geological layer that formed 41 million to 48 million years ago. Starting last summer, elaborate geological studies have been conducted in order to assess the characteristics of stones adapted to the restoration of the Gothic cathedral. New stones that are compatible with the monument are a key part of the restoration.

Stained-glass windows and murals were relatively unaffected by the fire, though many were exposed to fumes and are now covered in dust. They require thorough cleaning with products that do not alter the paintings or the glass. Yet, finding artisans skilled in medieval restoration could be challenging.

“We need to open 100 places in our framing, stonecutting and roofing sections. We will therefore have to train at least 300 additional companions,” said Jean-Claude Bellanger, secretary-general of the Companions of Duty, a brotherhood of craftsmen established in the Middle Ages. “We will have additional resources, thanks to the new law on training and apprenticeship. … Only the best are selected to participate in this type of work where it is imperative to master certain techniques. No less than 10 years are necessary to train a specialist companion.”

Some 340,000 donors from 150 countries have raised 833 million euros ($998 million) — and 98 percent of pledges have either been cashed or resulted in firm legal commitments, according to the Rebâtir Notre-Dame de Paris.

The cause of the fire is still unknown. Theories point to an electrical short circuit or burning cigarette.

Vincent Plumas, spokesperson for the Paris public prosecutor’s office, told Zenger News no new elements have emerged in the case that could be made public.