Rescue Plan Hatched To Save Cape Vulture Chicks From Extinction

Without carnivores at a breeding site in Botswana, there are no bone fragments vital to the endangered bird species. 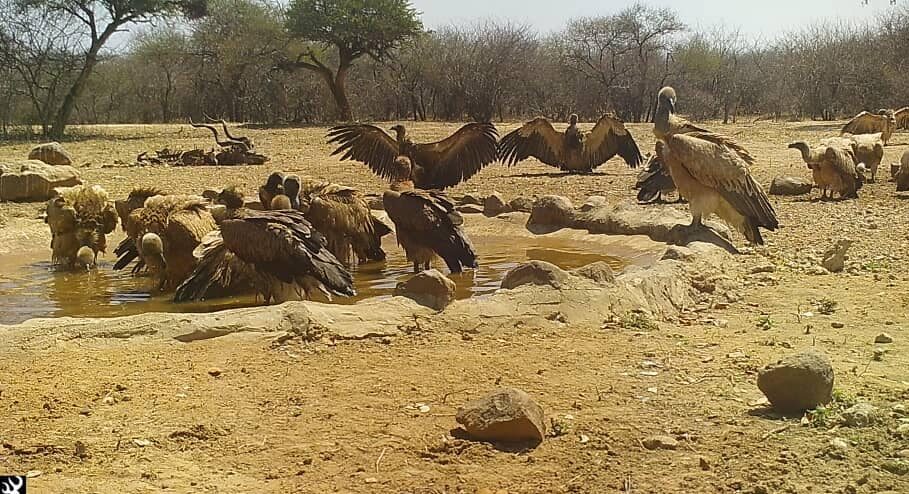 The absence of carnivores in a vulture breeding site in Botswana has prompted a conservation organization to hatch a plan to rescue chicks from starving to death.

Without carnivores to break up dead animals bones, there are no bone fragments for vultures to carry to their nests to feed their chicks and provide much-needed calcium.

Now, Raptors Botswana, a sister organization to Kalahari Research and Conservation Botswana, provides crushed bones to Cape vultures, an endangered species endemic to Southern Africa. The International Union for Conservation of Nature estimates there are about 9,400 left in the world.

The chicks were found at the bottom of Goo-Moremi Gorge, a vulture breeding site, where, unable to fly, they were starving to death. Their wings were deformed due to a calcium deficiency known as osteodystrophy.

“The bone development of the chicks is compromised, sometimes to the point of them being unable to walk, run or fly. The bones are usually fragile as a result of poor calcium content,” said Moses Selebatso, a researcher with Raptors Botswana.

The organization began monitoring the Cape vulture breeding numbers in two locations in 2017 in the Tswapong Hills, where the Goo-Moremi Gorge is located. Three starving chicks were found at the bottom of the gorge.

“We were able to confirm this was due to lack of calcium in their diet,” Selebatso said. “In 2018, we started a pilot project working with the local community at Moremi Gorge, experimenting with how we could get adults to feed off bone fragments. Even though the breeding location is remote, we did manage to get adults eating bone fragments, although on a relatively small scale.”

He said another three chicks with deformed wings were found at the bottom of the gorge the following year.

“After a more thorough search along accessible parts of the bottom of the Gorge, nine more chicks were found with deformed wings. It was then clear that it was a big problem for the breeding colony and worse than we may have first anticipated,” he said. “In 2019, we provided at least 8 kilograms (17.6 pounds) of bone fragments every six weeks to the adult vultures, with a total of 505 kg (1,113 pounds) at the end of the breeding season.”

After the organization’s efforts to provide bone fragments, Selebatso said: “We saw fewer number of chicks with signs of deformities. When we started in 2018 we recorded 12 chicks with deformed wings or legs. Our initial effort in 2019 reduced the number to five, and we recorded only one chick with bone deformities in the 2020 breeding season.”

A study published in 2007 on bone intake by vultures in Namibia states: “Recently, populations of hyenas and other big carnivore numbers have declined, mainly due to human persecution, resulting in a lack of readily available crushed bone for vultures.”

Researcher Lothar Menge and three colleagues reported in the Namibia study that vultures make use of crushed bones if offered to them. They also found that bone intake usually increases during breeding season.

“In a natural setup, vultures depend on small bone fragments that are broken down during feeding by large carnivores, such as lion and hyenas,” said Selebatso. “The Cape vulture breeding sites are surrounded by livestock area, and the large carnivores have been eliminated, killed or pushed into protected areas. This leaves the vultures with meat and intact bones from dead livestock and some wildlife, and therefore unable to get the calcium from the bones.”

He said the biggest challenge the organization had was attracting vultures to the bones in the first place. “We had to provide some carcasses, which meant we had to buy goats and donkeys for this purpose. This option was not very ethical, but also very expensive,” he said.

A waterhole was then developed at the feeding site, which attracted the birds to bathe and have their bones, he said.

“Large nesting numbers this year has meant competition for nesting sites and an overflow to this spot, which is good news,” Raptors Botswana posted on its Facebook page in December 2020.

Other threats to the vulture population indiscriminate poisoning, poisoning by poachers and lead poisoning in Botswana.