Those found guilty will face fines up to $3,270 and a possible two years in prison. 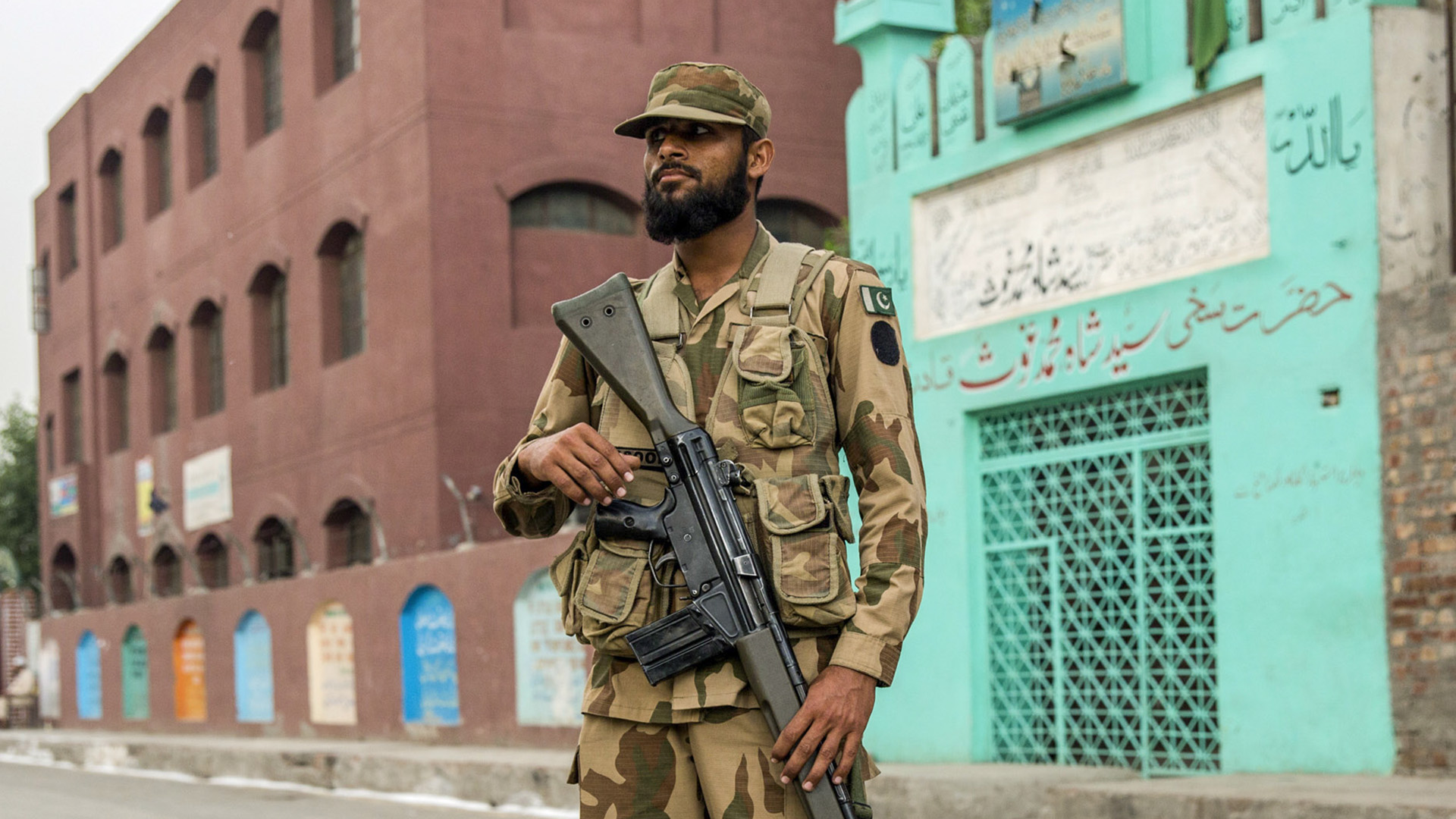 A new law in Pakistan is set to ban criticism of the army, and those found guilty will face fines and a possible two years behind bars. (Daniel Berehulak/Getty Images)

LAHORE, Pakistan — A new law in Pakistan is set to ban criticism of the army, and those found guilty will face fines up to PKR 500,000 ($3,270) and a possible two years behind bars.

The Criminal Law (Amendment) Bill, 2020, passed by the National Assembly Standing Committee on Interior, will see critics of the armed forces tried in civil courts under Section 500A of the Pakistan Penal Code.

Critics of the law see it as the latest attempt to silence dissent in the country, with the state already accused of large-scale censorship.

Tehreek-e-Insaf is the ruling party in Pakistan.

Reporters Without Borders, an international non-governmental organization to safeguard the right to freedom of information, ranks Pakistan 145 out of 180 countries on the press freedom index, maintaining that journalists in Pakistan work “under the military establishment’s thumb”.

In addition to rights groups and sections of the Opposition, condemnation for the law has come from the ruling Pakistan Tehreek-e-Insaf.

Some experts believe the Bill is an attempt by the Pakistan Tehreek-e-Insaf to muster the military’s support when it is under pressure from opposition parties and facing large-scale discontent from the masses after two-and-a-half years of economic crises.

Ayesha Siddiqa, political scientist and author of “Military Inc.: Inside Pakistan’s Military Economy”, called the passage of a law to criminalize criticism of the army “sinister”.

“Despite the existing silencing of dissent, the latest move will further enhance censorship in the country,” she told Zenger News. “It’s a constant struggle, so the push will continue. I don’t see [censorship] going away.”

Siddiqa believes that while Pakistan Tehreek-e-Insaf’s interests are protected by the move to silence critique of the army, the military leadership is also backing the law.

“I hope the Opposition pushes back in the Senate. But if they don’t, it will be disastrous. Though it’s worth inquiring how did it [the law] pass in the standing committee where all parties are present,” she said, underlining that opposition parties are covertly working with the military establishment keeping the 2023 general elections in mind.

Raja Khurram Shahzad Nawaz, the chairman of the National Assembly Standing Committee on Interior, broke a 5-5 tie by voting for the Bill to criminalize “ridiculing, bringing into disrepute, or defaming” Pakistan Army.

Agha Rafiullah, a leader of the Pakistan People’s Party, and Marriyum Aurangzeb and Nadeem Abbas Rebaira, leaders from the Pakistan Muslim League-Nawaz, opposed the law.

The Bill was introduced last year by Pakistan Tehreek-e-Insaf’s Amjad Ali Khan. Its timing raised eyebrows, given that it overlapped with the national uproar over a corruption scandal engulfing retired Lieutenant General Asim Saleem Bajwa.

The former military spokesperson Bajwa, a special advisor to Prime Minister Imran Khan on information and broadcasting at the time, heads the China-Pakistan Economic Corridor (CPEC) Authority overseeing the work on the $87-billion worth financial deals between Beijing and Islamabad.

In addition to censoring critique on the army’s policies, the military leadership is also accused by human rights groups of arbitrarily abducting individuals.

Global rights organizations have condemned the enforced disappearances in Pakistan, which often target nationalists in Balochistan, Khyber Pakhtunkhwa, Sindh, and Gilgit-Baltistan — all areas under the direct control of Pakistan.

In addition to targeting ethnic dissidents questioning or critiquing the state policies, a crackdown was also unleashed on social media voices in 2017, with dissenting bloggers allegedly abducted by law enforcement agencies.

This trend of the army targeting writers and journalists critical of them, even after their removal from mainstream media, has continued. Many observers maintain that the country has witnessed unprecedented censorship since the beginning of the Pakistan Tehreek-e-Insaf’s tenure in 2018.

“In the aftermath of the 2018 sham general elections, even the word ‘rigging’ was banned,” Gul Bukhari, a former columnist with Pakistani dailies The Nation and Daily Times who was abducted in 2018, told Zenger News.

Bukhari said she has never seen the kind of censorship that Pakistan is experiencing today, despite the country having been ruled by the military for around half of its 73 years of independence.

“Right after the election, opposition leaders could not be shown on television. A three-time prime minister is still not allowed to be covered by the mainstream media. This is the extent of fascism,” she said.

She believes the new law is an attempt by the army to muzzle the exposure and criticism of its crimes. “The proposed law is laughable. Members of only one department of the government are being protected from criticism and officially being elevated to the status of a holy cow. No democratic society can allow that,” she said.

“What this junta needs to understand is that if torture, abductions, kill, and dump have not silenced the people of Pakistan, how would another draconian and unfair law silence them?”

Observers also note that the move to ban any criticism on the part of the army officially could backfire and play right into the hands of the critics who accuse the military of wide-scale human rights abuses in the country.

“[The law] reinforces the argument that the establishment is behind the missing persons,” Lieutenant General Talat Masood, a former secretary at Pakistan’s Ministry of Defense Production, told Zenger News.

“Instead of tightening the noose and stifling voices, it would be better [for the military] to allow them to express their views. So, you know exactly how they are feeling.”

This silencing of voices critical of the military establishment doesn’t only target those in the civilian sphere but is also aimed at sections within the armed forces.

In 2019, the military’s Inter-Services Public Relations issued a list of 26 retired army officers who were allowed to speak to the media as defense analysts, barring others. Masood’s name wasn’t on the list.

Other retired officers who wish to appear as defense analysts were asked to contact the Inter-Services Public Relations to obtain a no-objection certificate.

“I was disappointed. I’ve served the army for 40 years. You can look at my career and my contribution. I came to Pakistan [during Partition] on my own, at the age of 16, serving the country ever since. It saddens me that people [in the military establishment] have such warped thinking and are so insecure,” Masood said.

“Different opinions should be welcomed, and criticism should be taken in its stride. Pakistan’s armed forces are powerful; they shouldn’t have anything to worry about.”