The makers of the Indian film “83” have launched a special merchandise line. 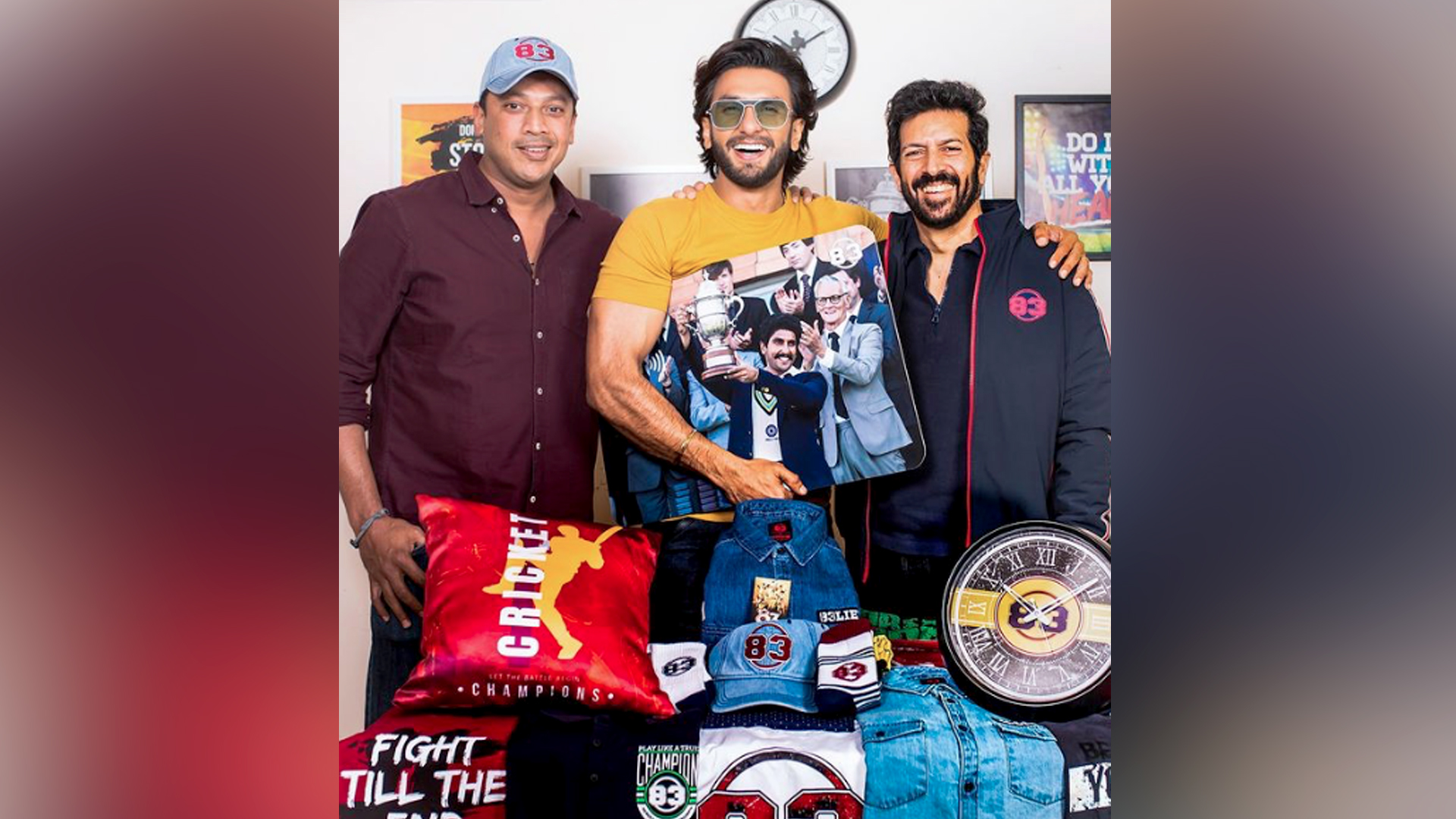 NEW DELHI — In the run-up to the June 4 release of “83”, a film inspired by the Indian team’s victory in the 1983 Cricket World Cup, the producers have launched an exhaustive merchandise line which fuses two of India’s most binding religions — Bollywood and Cricket.

Valued at over INR 20 crores ($2.67 million), ’83 Believe’ is the widest consumer product range launched by any film-based property in India, as per the makers who are focusing on strengthening their licensing and merchandising business.

With an average of 2,000 feature films a year and an insatiable appetite for entertainment, India is one of the world’s largest movie-producing nations. Yet, licensing and merchandising is a vertical that filmmakers haven’t looked at with the seriousness accorded to it by movie merchants in Hollywood or other countries.

“While movie merchandising isn’t new to the Indian entertainment industry, it has always been seen as a marketing tool than a standalone business or a vital revenue stream,” Shibasish Sarkar, group chief executive officer, Reliance Entertainment, told Zenger News.

“What we are exploring with ‘83’ is whether the brand can outlive the film,” said Sarkar.

The movie, one of Bollywood’s most-awaited big-screen spectacles, was due to release in 2020.

Without any buzz or promotion around the film, production houses such as Reliance Entertainment and Phantom Films and tennis player Mahesh Bhupathi’s licensing and merchandising business Swag Fashions Hub put out some products in the market. To their surprise, they were “sold out” over a period.

“Maybe the brand and the lineage [of the 1983 World Cup victory] is powerful,” Sarkar said, sharing his confidence that the merchandise, available across categories such as apparel, home furnishings, furniture, stationery, and more, will continue its journey even when the film goes out of the theaters.

Conceding that this is not a “one-film-centric” plan for Reliance Entertainment, a key player in the $2 billion-plus Indian movie industry, Sarkar said they gave a serious thought towards building on their popular IPs such as “Little Singham” and “Smaashhing Simmba”.

“Merchandising cannot be a subset of the product. It has to be a standalone journey that takes those characters forward,” Sarkar said.

“India is a ‘good market’ for movie merchandising,” Jatin Varma, founder of Comic-Con India, told Zenger News. Comic-Con India, which has clocked a decade, has emerged as the country’s biggest pop culture extravaganza.

“But not everyone has been able to tap into the lucrative merchandising market here in India,” Varma said. “People do not have a long-term vision with their film or franchise, and not everyone invests their time in fan service. This also requires a slight change in mindset where it is not about the lead actor, but more about the character and the story.”

In Indian cinema, movie merchandising has made only sporadic appearances — from the 1980s film “Maine Pyar Kiya” to more recent films such as “Krrish”, “Jodhaa Akbar”, “Ra.One”, “Dhoom”, and the mega-hit “Baahubali” to name a few.

But Hollywood studios, which are used to earning billions with film merchandise globally, continue to bring their products to cater to their fan base in India.

Disney, for example, has a wide range of products across its brands — Disney, Pixar, Marvel, and Star Wars — as well as categories.

For “Frozen 2”, Disney’s consumer products vertical collaborated with 67 brands, making it the highest for an animated film in the country. For “Star Wars: The Last Jedi”, as many as 44 brand association deals were in place.

Makers of the “Baahubali” franchise had set out to rewrite the rules of film merchandising by launching 20-30 items including apparel, accessories, stationery, and figurines.

But the revenue it generated was “negligible”, Arka Mediaworks’ Shobu Yarlagadda, a producer of the film franchise, told Zenger News.

“In India, the market is limited because we have never built on franchises or large stories which have a strong connect with the audience,” Yarlagadda said.

“When you have a franchise like Star Wars going over years and decades, a fan base is built. The audience has to live with it first to want to own a piece of it. From that perspective, there are very few Indian films like that.”

“Baahubali” has turned out to be one-of-a-kind for the Indian entertainment ecosystem by creating a franchise that has gone beyond the movies to build an animated series, a graphic novel and a trilogy novel series, a game, and a Netflix series.

Still, suppose you ask India’s youngsters to pick a Superman or Hulk t-shirt over merchandise inspired by Indian superhero franchises such as “Krrish” or “Baahubali”. In that case, the answer will be the former.

“Emotional connect is something that films have not been able to fully tap into in the country despite the volume of content,” said Yarlagadda.

Shailesh Kapoor, chief executive of consulting firm Ormax Media, believes merchandising cannot just be done for any and every movie.

“You have to pick movies which have characters,” Kapoor told Zenger News. “Even Hollywood doesn’t do merchandising for every film. People want to associate with characters, not movies. Even in a Disney store, everything is sold by characters.”

Besides, several factors work against the development of a merchandise market in the country. Low purchasing power, lack of distribution infrastructure, and the fact that Indian franchises rarely have a steady flow of content, unlike a Marvel Cinematic Universe or DC Universe, pose a roadblock for a market that has a huge untapped potential.

There is also the problem of fake and often much cheaper pirated versions flooding flea markets. But ultimately, as Yarlagadda said, “It is all about creating a connection. If a film or a world is built and lasts a few years, we will be able to build a lot more merchandising.”