VIDEO: Wheel Fast: Giant Tortoise With Injured Legs Given Skateboard To Get About

Endangered Helmuth's 220lb bulk it too much for him to carry, so vets have given him wheels to train with.
By Georgina Jadikovskaall April 11, 2021
Facebook
Twitter
Linkedin
Email 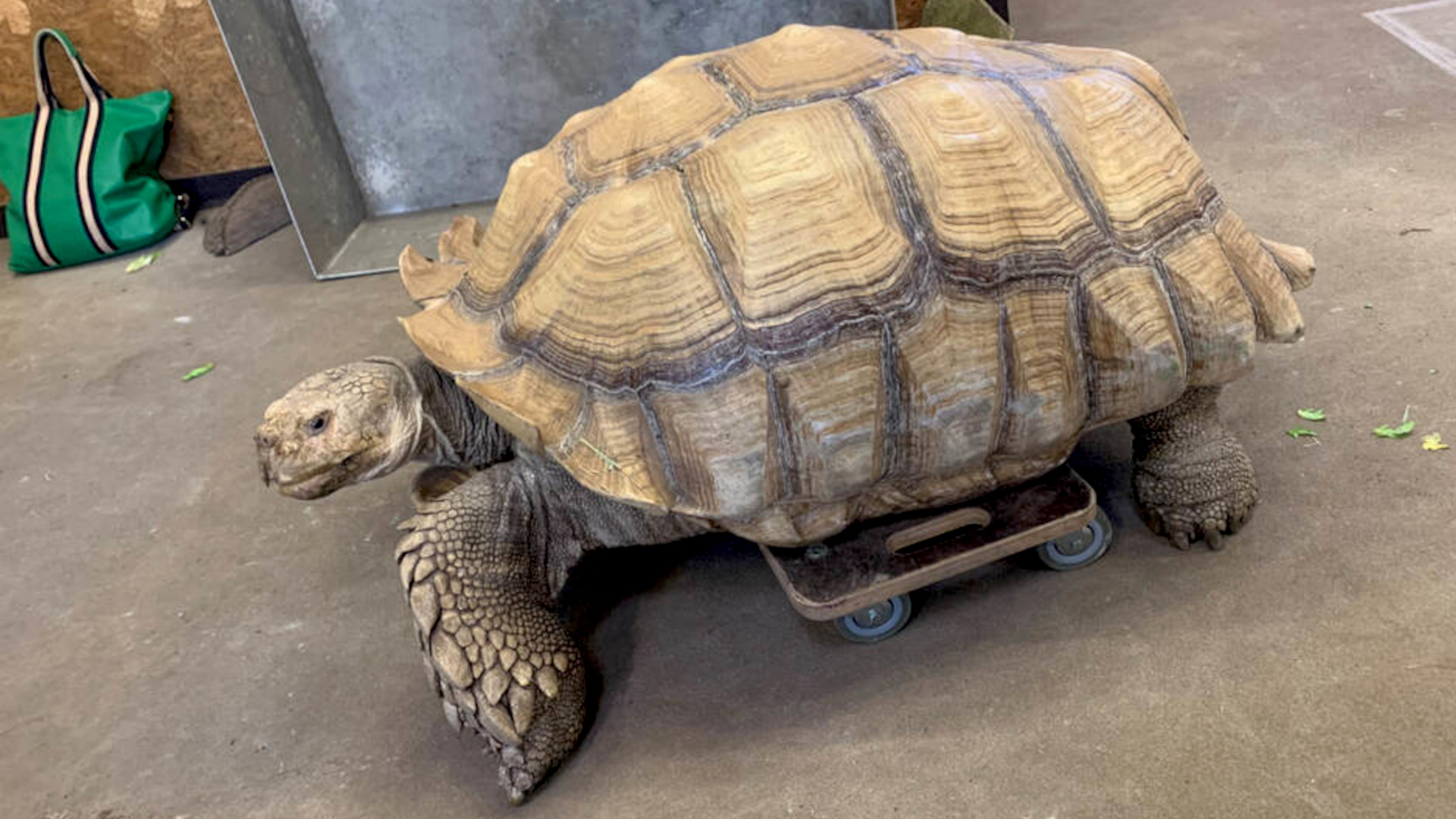 MUNICH — A giant endangered tortoise was seen moving around on a roller board during a physiotherapy session after joint problems left it with difficulties in lifting its massive shell.

Helmuth, 23, has recently been whizzing around the zoo on a roller board due to problems with its front legs. African spurred tortoises are listed as endangered on the International Union for Conservation of Nature’s Red List of Endangered Species.

“Helmuth has problems in the shoulder joints, especially on the right. The diagnosis was established with a CT scan at the Telgte veterinary clinic,” said a zoo spokesperson.

Helmuth, who weighs over 100 kilograms (220 lbs), was given a roller board which he uses to move around and train his muscles to help overcome his joint problems.

“His therapy consists of long training sessions on the roller board once a day. He is also receiving medication,” said the spokesperson.

The board helps Helmuth redistribute his bodyweight properly as his condition makes it hard for him to lift his shell. However, according to the spokesperson, he is used to the training regime and now enjoys it very much.

“You can tell that the training is entertaining for him. When he starts, he moves pretty fast, and he always does an extra lap,” said the spokesperson. “We can already tell that his legs have become stronger again, and we hope that he will soon be even better.”

Zoom Erlebniswelt adventure world employees are hoping that Helmut’s medication and therapy plan will result in a positive outcome.

As per reports from San Diego Zoo Wildlife Alliance, the African spurred tortoise is the largest tortoise found on land. It is 30 inches (76 centimeters) in length and weighs over 100 pounds (45 kilograms). Some male tortoises even reach 200 pounds (90 kilograms).

“It is bred and sold throughout the US. They grow quickly and get extremely large,” states the report. “Many owners find them to be unmanageable and in need of a new home. They are curious, intelligent reptiles with lively personalities, especially when young. It is also called the sulcata tortoise, spurred tortoise, and African spur thigh tortoise.”

The shell is permanently attached to its spine and rib cage; hence it cannot crawl out of it. The shell’s top is called the carapace, and the bottom is the plastron.