VIDEO: We’re Knocking The Stuffing Out Of This Scaredy Cat

Tiger cubs get to grips with cuddly tiger toy as they try out their hunting skills in a heartwarming video. 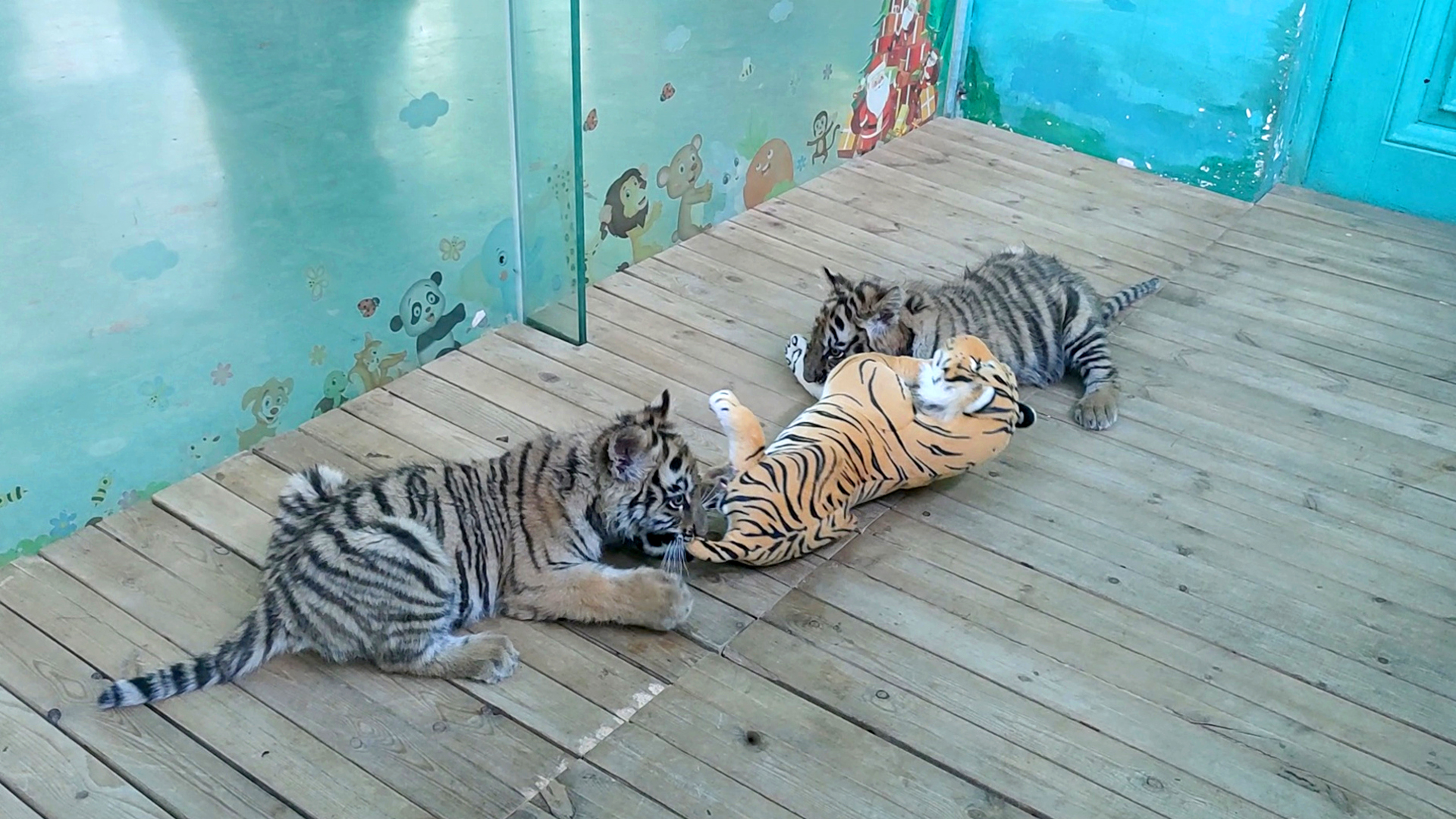 CHANGZHOU, China — Two cute Siberian tiger cubs were shot wrestling with a tiger soft-toy, nibbling its tail and clamping down on its throat in the Yangtze River golden triangle area of the city of Changzhou in the eastern Chinese province of Jiangsu.

The adorable footage was shared on social media by Yancheng Wild Animal World.

The footage shows the endangered cubs biting parts of the soft toy as one even demonstrates its early throat-clamping skills.

“The tiger cubs are siblings and four months old. That they are like human children, full of energy and curiosity,” said a zoo spokesperson.

Yancheng Wild Animal World has the only drive-tour scenic spot in the province of Jiangsu and contains various wild animals such as deer, camels, and lions.

The zoo is open only in spring and autumn.

Seven kilometers (4.35 miles) south of Changzhou, the Yancheng Wild Zoo is located within the ruins of an ancient town, 0.6 square kilometer in area, whose history can be traced back to the Western Zhou Dynasty, approximately 3000 years ago.

As per the Red List of the International Union for Conservation of Nature, Siberian tigers – a specific population of the Panthera tigris Tigris subspecies in far-eastern Russia and north-eastern China – are listed as ‘endangered.

“The Amur Tiger now occurs primarily in Russia, where it has made a spectacular comeback since the 1930s when the population fell as low as 20–30 animals,” said the International Union for Conservation of Nature in a report. “The population is now estimated at 360 tigers, based on a comprehensive 2005 population census.”

Based on track surveys in the snow, this number probably includes around 100 sub-adults and a revision of the Amur Tiger’s Red List category from Critically Endangered to Endangered in 2007.

As per reports from the Russian Wildlife Conservation Society, about 500 Siberian or Amur tigers are left in the wild, with 95 percent of them in the Russian Far East. Within the tiger’s range in Russia, the largest protected area is the Sikhote-Alin Biosphere Reserve, a 400,000 ha (4000 km2) reserve that has been a stronghold for the Amur tiger since its creation in 1935 and which have over 30 tigers today.

“The goal of the Siberian Tiger Project is to collect the best possible scientific information on tiger ecology for use in conservation plans,” states the report. “Through radio-tracking of more than 60 tigers since 1992, WCS (Wildlife Conservation Society) specialists have studied their social structure, land use patterns, food habits, reproduction, mortality, and relationship with other species, including humans.”