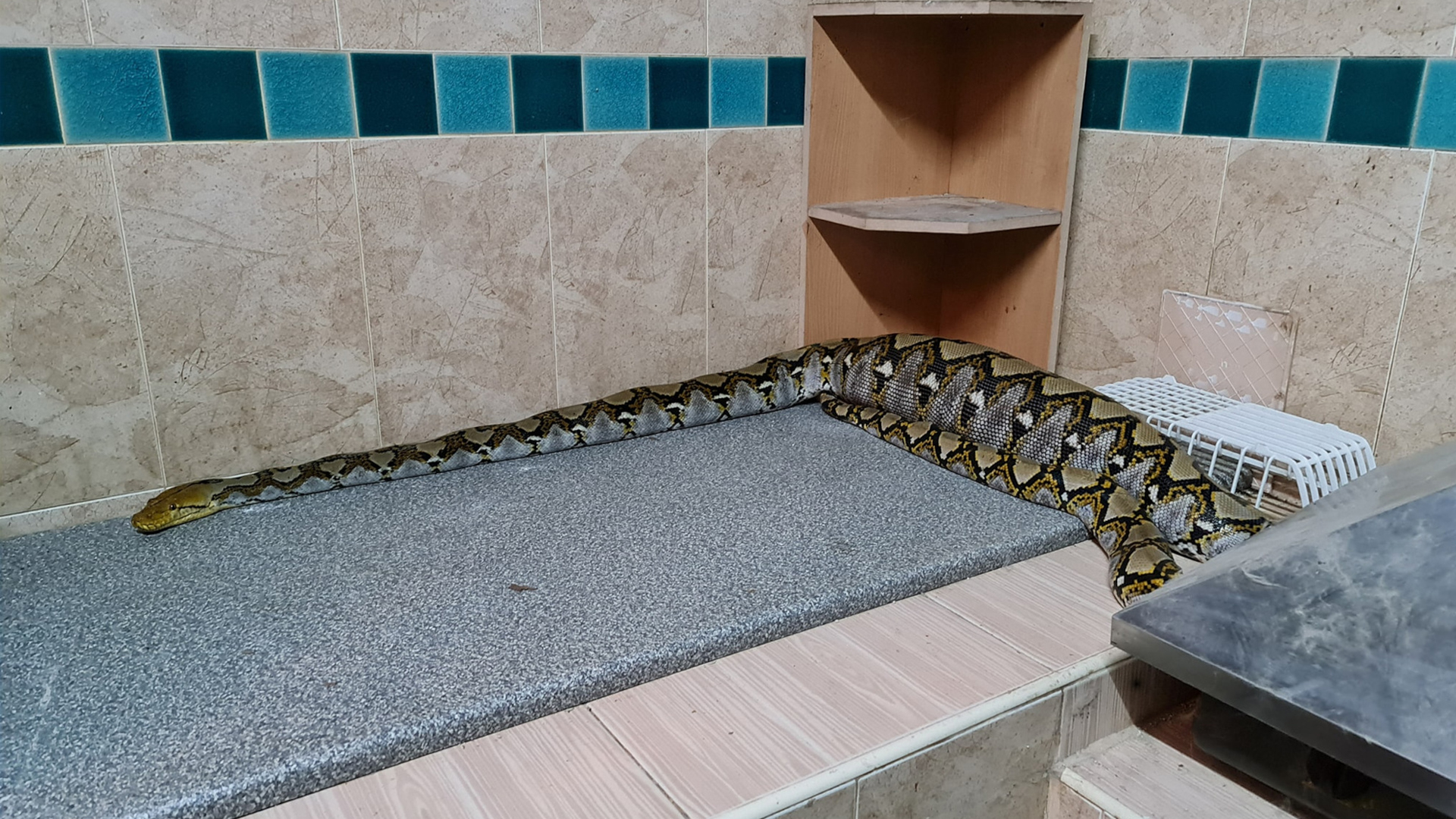 Gracia was looking for the family cat, when she spotted a large python that had eaten it. (Kanchi.Dao/Newsflash)

PARAÑAQUE, Philippines — A Thai family is mourning the loss of their beloved cat after it was swallowed whole by a giant python that sneaked into their home.

Kanchi Nard, the cat’s owner, posted the images on Facebook on April 4.

The cat owner said that her daughter went looking for the cat, named Hurjun, around the house but came across the giant python instead. The girl then alerted her mum and said that she was unable to find the family cat.

Judging by the snake’s bulging belly, the mother realized that the poor cat had been suffocated and swallowed whole by the python.

Images showed the snake with a large lump in the middle of its body, apparently the family’s missing pet.

The mother said the snake was promptly caught by council workers and taken away.

Nard said the family was even sadder when a new outfit for Hurjun, bought by her mother-in-law, was delivered to the home shortly after the cat was eaten.

The Facebook post was widely circulated, and one netizen offered to give the family a kitten soon as their feline was nearly ready to give birth.

As per reports by San Diego Zoo Wildlife Alliance, pythons are found in rainforests, grasslands and savannas, woodlands, swamps, rocky outcrops, desert sandhills, shrublands, depending on the species. Pythons may be active day or night, depending on species, habitat, and most active prey.

“Most pythons seek shelter in tree branches or hollows, among reeds, in rocky outcrops, or abandoned mammal burrows,” states the report. “Two exceptions are the woma and the black-headed python, the only pythons known to create their burrow by digging with the head and scooping out the dirt by curving their neck. Their jaws are countersunk, lower jaw fitting inside the upper jaw, which keeps dirt out of the snake’s mouth.”

Like most snakes, pythons don’t chase after their prey. Instead, they are ambush hunters. They use both sight and smell to locate prey. Pythons also have an additional advantage: most have unique temperature-sensitive “pits,” or holes, along their jaws that can sense the heat of a nearby animal. This helps them find warm-blooded prey even in the dark or among dense foliage.

“The python is a constrictor,” states the report. “It grabs its prey with its teeth, then quickly wraps coils of its body around the prey and squeezes. The python doesn’t crush the prey and breaks its bones, though.”

«Previous Post
VIDEO: We’re Knocking The Stuffing Out Of This Scaredy Cat»Next Post
VIDEO: Are Mew Copying Me? Black Cat Plays At Being His Tabby Pal’s Shadow