Indian State Faces Over 300 Cases Of Forest Fires In April

In just five days of April, Uttarakhand has witnessed 361 fire incidents that have gutted 567 hectares of forest land. 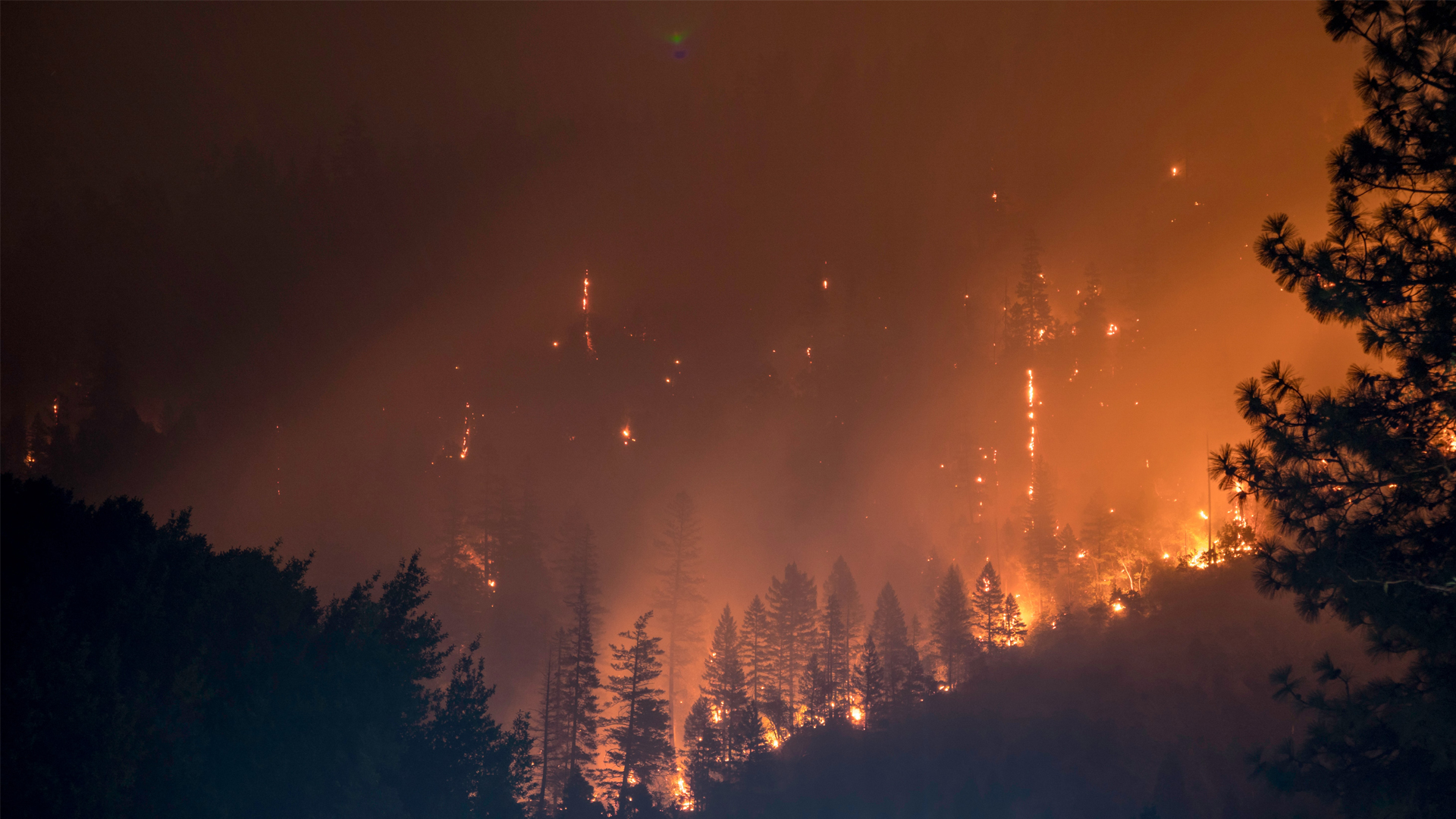 The Forest Survey of India reported 40 active cases of forest fires in various districts of the state on April 9. (Matt Howard/Unsplash)

PUNE, India — The forests have been burning for days in India’s northern state of Uttarakhand — a major tourism destination for Indians and foreigners alike.

In just five days of April, Uttarakhand, home to the mighty Himalayas, has witnessed 361 incidents of forest fires that have damaged almost 567 hectares of forest land, equivalent to over 1,000 football fields.

The state has around 38,000 square kilometers of forests, which constitutes almost 71 percent of its total geographical area.

He also urged residents and tourists to be cautious.

“The state government is making every effort to extinguish the forest fires, but it is also the duty of the public to cooperate in the prevention of forest fires,” Rawat tweeted on April 5. 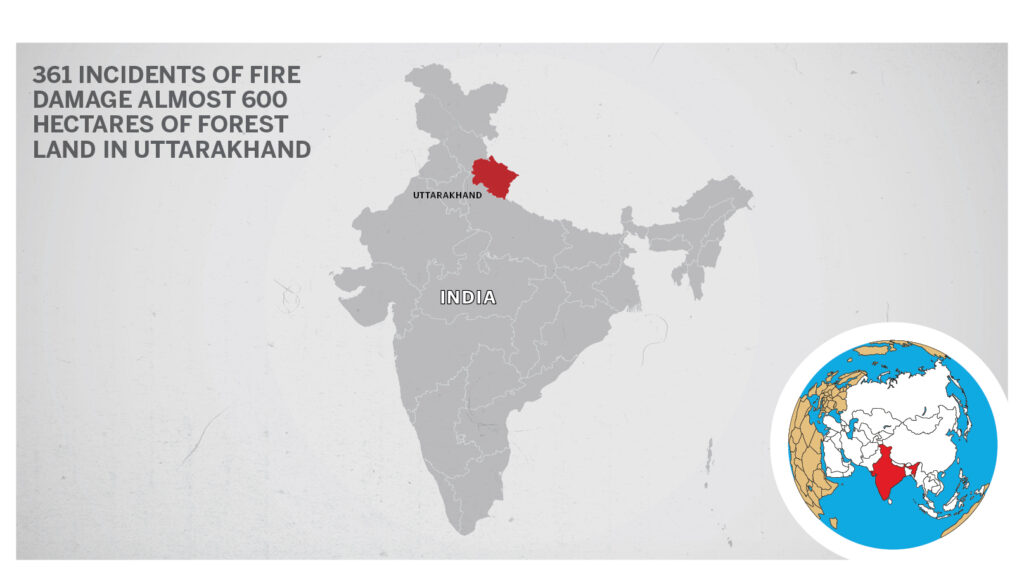 “I request that you do not throw cigarettes or match sticks in the forest, as well as take special precautions while burning waste in the fields and barns.”

“The village area roads go through the forests. With more people commuting, the probability of them throwing burnt stubs of cigarettes in the forest increases.”

As per Khati, their job begins when the forest fires start spreading to the villages.

“As long as the forest department manages to cease the fire within the forest, we do not do anything unless asked for special assistance.”

India’s central government has provided the Uttarakhand government with two MI-17 helicopters for extinguishing the fires. The choppers are collecting water from nearby lakes.

“NDRF teams will also come to the state for help. The Union Home Minister [Amit Shah] has also assured all possible assistance as per the need,” Rawat said in a tweet.

The National Disaster Response Force or NDRF was constituted to tackle “a threatening disaster situation or disaster” under the Disaster Management Act, 2005.

Fire watchers deployed across the state were instructed to monitor the forests for 24 hours. Rawat has also asked the forest department officers and employees not to take leaves during the emergency.

Pandey said the earth’s surface lost moisture early this time due to less rain in monsoon and almost no rain in winters.

“Whether artificial rain would be used or not is the government’s call,” said Pandey.

Pandey’s team is cooperating with the teams the Indian government has deployed to control the fires.

In hilly areas, the surface gets drier faster than plains due to the lower accumulation of rainwater. The fires are caused mainly because of oxygen, fuel load (accumulated leaves), and temperature.

Forest fires or bush fires are a common phenomenon in Uttarakhand. During spring, the state witnesses forest fires, which continue up to almost mid-June.

This year’s situation is considered alarming because forest fires in Uttarakhand reach their peak only around mid-May. There is also concern about the 700 bird species and other wild animals found in the state.

In 2016, forest fires damaged nearly 4,000 hectares of forest cover across 13 districts in Uttarakhand — killing nine and injuring 17, besides damaging the biodiversity and forest ecosystems beyond restoration. This year, four people have died so far.

In March, a fire raged for more than 10 days at the Similipal National Park, a UNESCO Biosphere Reserve in the country’s eastern state of Odisha. “The inferno burnt down eight of the 21 ranges of the Simlipal forest division,” Vanoo Mitra Acharya, a conservation activist, told Zenger News.

A major fire broke out at Karnataka’s Nagarhole National Park and Tiger Reserve on March 4. In December 2020, a massive wildfire broke out in the Dzukou valley that straddles the states of Nagaland and Manipur in India’s north-eastern region.

A 2019 Forest Survey of India report states that between 2015 and 2017, the number of forest fires doubled. “The annual losses from forest fires in India have been moderately estimated at INR 440 crores ($107 million),” states a U.N.’s Food and Agriculture Organization study.

Bush fires and forest fires are of concern in countries such as the U.S. and Australia, too.

In late October last year, significant fires broke out throughout California, leading to the evacuation of more than 200,000 people and the declaration of a state of emergency.

The 2019/2020 bush fire season is considered one of the most devastating in Australia’s history.

Between October 2019 and February 2020, almost 13 million hectares of land were gutted in New South Wales and the Northern Territory in Australia, as per data from Statista. Insurance claims related to bush fires across Australia were valued at $1.4 billion as of January 2020.

The Indian government had come up with a National Action Plan on Forest Fires in 2018 to reduce fire events by informing forest fringe communities and incentivizing them to work with state forest departments.

But Anmol Ohri, founding director, Climate Front India, said forest fires are generally not considered a significant disaster in the country. Even “forest officials tend to take this lightly”.

Ohri believes the government should ensure that forest fires, no matter how threatening, should be taken care of as a disaster.

“Forest fires are seen as a naturally occurring phenomenon, and people do not recognize the amount of threat it carries,” he said. “The government needs to keep a tally and classify the forest fires in terms of threat.”