Expert reptile trapper snared one of the world’s most venomous snakes hiding behind a cupboard. 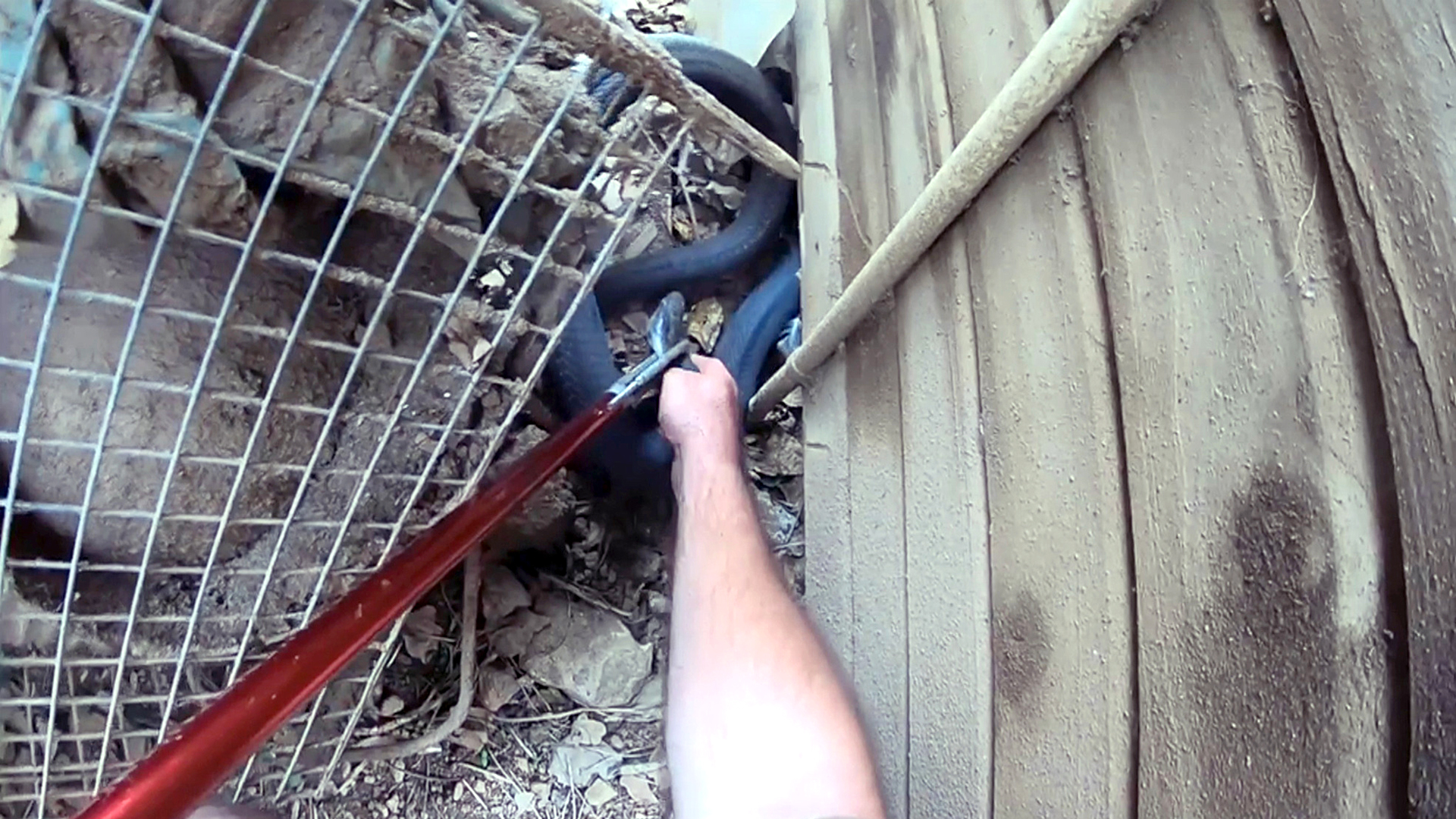 Evans catches a 2.6-meters black mamba that was stuck near two roosters in a chicken coop. (Nick Evans/Newsflash)

Evans caught the venomous snake from the city of Durban in the South African province of KwaZulu-Natal, after a citizen informed him on March 18.

“A homeowner in the Bellair area called me after spotting the black mamba on her CCTV camera,” Evans said.

“The footage shows the 2.6-meter long snake near two roosters, but neither of them was scared. I think the snake was there for a while, eating rats in the chicken coop.”

“This was one of my most thrilling rescues in a while, with a few laughable moments afterward. I was scared while I was trying to catch the snake, but adrenaline was pumping, and it was challenging,” said Evans.

“I got frightened when an electric fence shocked me, and my friend and research partner Dr. Cormac Price, who was with me, thought the snake had bitten me.”

Evans, who talks about snakes in schools and local communities, said Covid-19 had affected his educational work, but nothing has changed regarding his call-outs.

“Covid-19 hit, and I haven’t done my educational work for months. Only now, I am starting to get some requests again,” he said.

The snake catcher also said that black mambas are his favorite snake, “They have an evil reputation, but they are terrified of people.”

The giant snake he ever caught was a four-meter (13-foot) python at home.

The black mamba, one of Africa’s most feared and respected snakes, inevitably evokes reactions of fear, respect, or awe — often merely when mentioned, as per the website of Kruger National Park.

Black mambas are known for their large size, quickness, and highly potent venom. They have coffin-shaped heads and are graceful, athletic snakes. Black mambas live in sub-Saharan Africa and are one of the continent’s most dangerous snakes, as per the South African National Biodiversity Institute.

“Black mambas are shy but aggressive, and if cornered, the snake may rear up and threaten with an open mouth and a slightly expanded or flattened neck (or hood) before striking. Black mambas can bite, injecting its deadly neurotoxic venom, which causes difficulty in breathing within half an hour,” SANBI states.

“They have a specialized organ known as the vomeronasal organ, or the Jacobson’s organ, which is involved in the snake’s chemical communication and hunting prey. The organ processes stimuli and helps the snake detect what is in its environment and where potential prey is. They often use their eyesight, mainly for detection of motion, and sudden movements will cause them to strike.”The black mamba, just like other snakes, can move without legs. A recently discovered evolutionary trait that black mambas possess, which helps them move, is their scales. A study at the Georgia Institute of Technology shows that the scales on snakes have evolved as hooks to create more friction to help drive the snake forward.

«Previous Post
Suez Canal Authority Seeks $1 Billion In Compensation For Ever Given Crisis»Next Post
VIDEO: Amelia, The Bear, Pops Out Of Hole In Snow After Months Of Hibernation