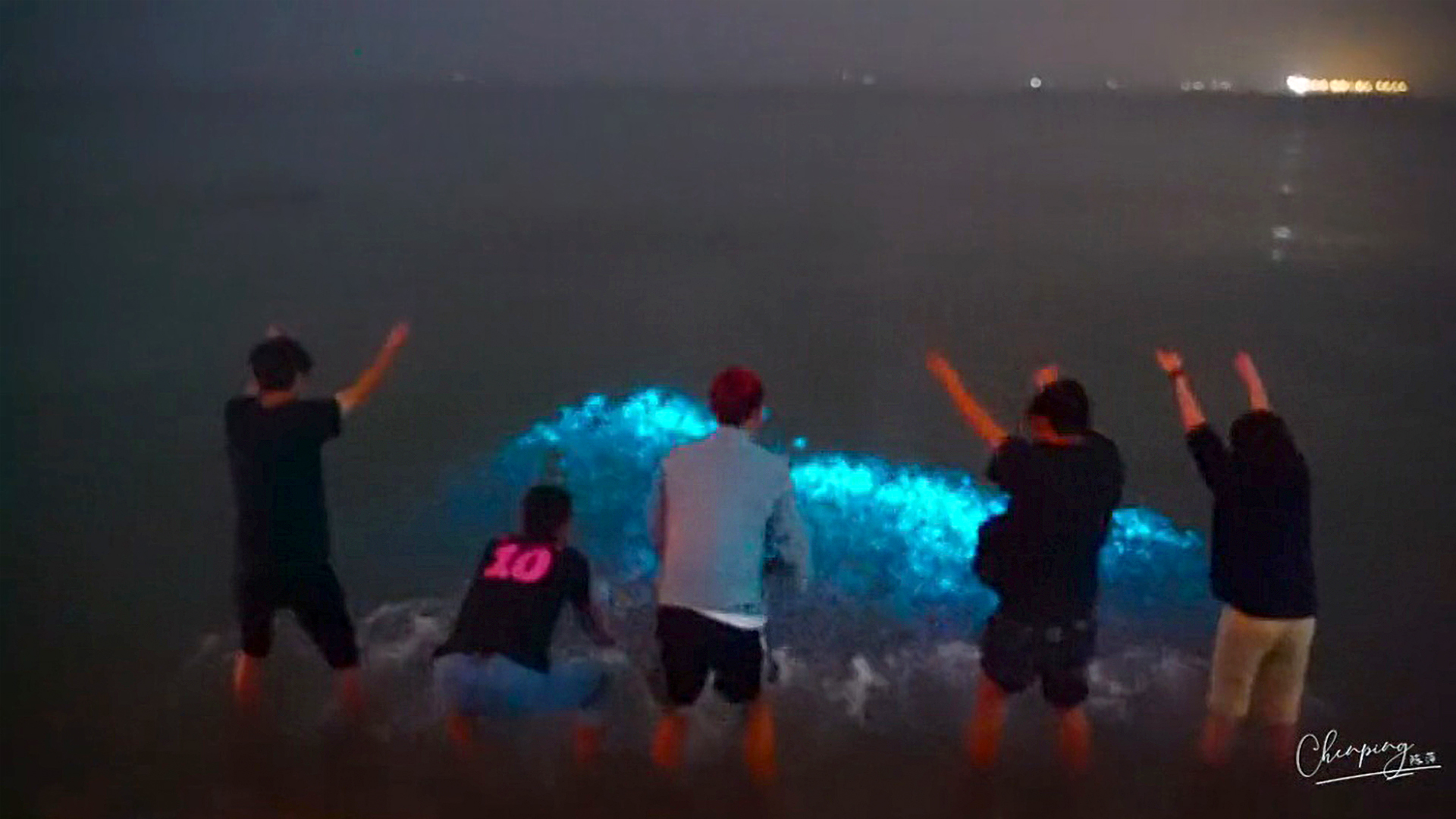 Residents observing the phenomenon along the lake. (mtx1220/AsiaWire)

The ‘blue tears’ phenomenon took place at Yundang Lake in Xiamen in the south-eastern Chinese province of Fujian on March 29. Citizens widely shared the footage on the social network Douyin, also known as TikTok.

The fluorescent effect in the water is caused by Noctiluca scintillans, also known as sea sparkle, a marine species of dinoflagellate, single-celled eukaryotes, that exhibits bioluminescence when disturbed.

“Single-celled organisms known as Noctiluca scintillans—a type of dinoflagellate phytoplankton—is responsible for the glow. But despite the beauty of these ‘blue tear’ blooms, when these bioluminescent organisms aggregate or grow into very high concentrations, they can form massive ‘red tides’ that can harm marine life and create dead zones,” as per the National Aeronautics and Space Administration.

The phenomenon makes it appear like fluorescent blue lights are in the water, shining brightly from beneath the surface.

Citizens of Fujian said it was the first time they had seen the spectacle in Xiamen and shared images on social media.

In the first video, a group of people is seen disturbing the water with their hands and throwing pebbles as onlookers gasp and say, “wow.”

The second video shows the blue sea sparkle rippling across the surface when the water is disturbed by wind and movement.

“Blue tears” appear throughout the world and are often found along the coast, in estuaries, and in shallow areas that receive lots of light, helping to grow the phytoplankton they feed on.“Scientists typically study such blooms by boat, but their vast size makes it difficult to map their full extent. However, scientists now have a powerful tool — satellite monitoring — to help them keep an eye on red Noctiluca scintillans blooms found in the East China Sea,” states NASA.

As per Serious Science, the “Blue tears” is a beautiful phenomenon, but it may also cause “red tides”. Many of these dinoflagellate phytoplankton species are toxic. During this period, sea animals that feed on dinoflagellates become contaminated due to the accumulation of high amounts of toxins from dinoflagellates.

“The sea sparkle belongs to the group of non-photosynthesizing dinoflagellates since they are carnivores. They excrete ammonia as a by-product of their metabolism and is harmful to other organisms. If the numbers of sea sparkles are high, this may have unpleasant consequences – ammonia ions dissolve in water and may cause blossoming of the other algae.”

«Previous Post
Lathmar Holi: Zooming In On The Angles Of Caste And Misogyny In India’s Twin Villages»Next Post
We Just Can’t Ketch Up: Pandemic Triggers Shortage Of Tomato Sauce