Zoo officials agree that adult male Himalayan black bears are unsafe around bear cubs and should in the care of the mother bears. 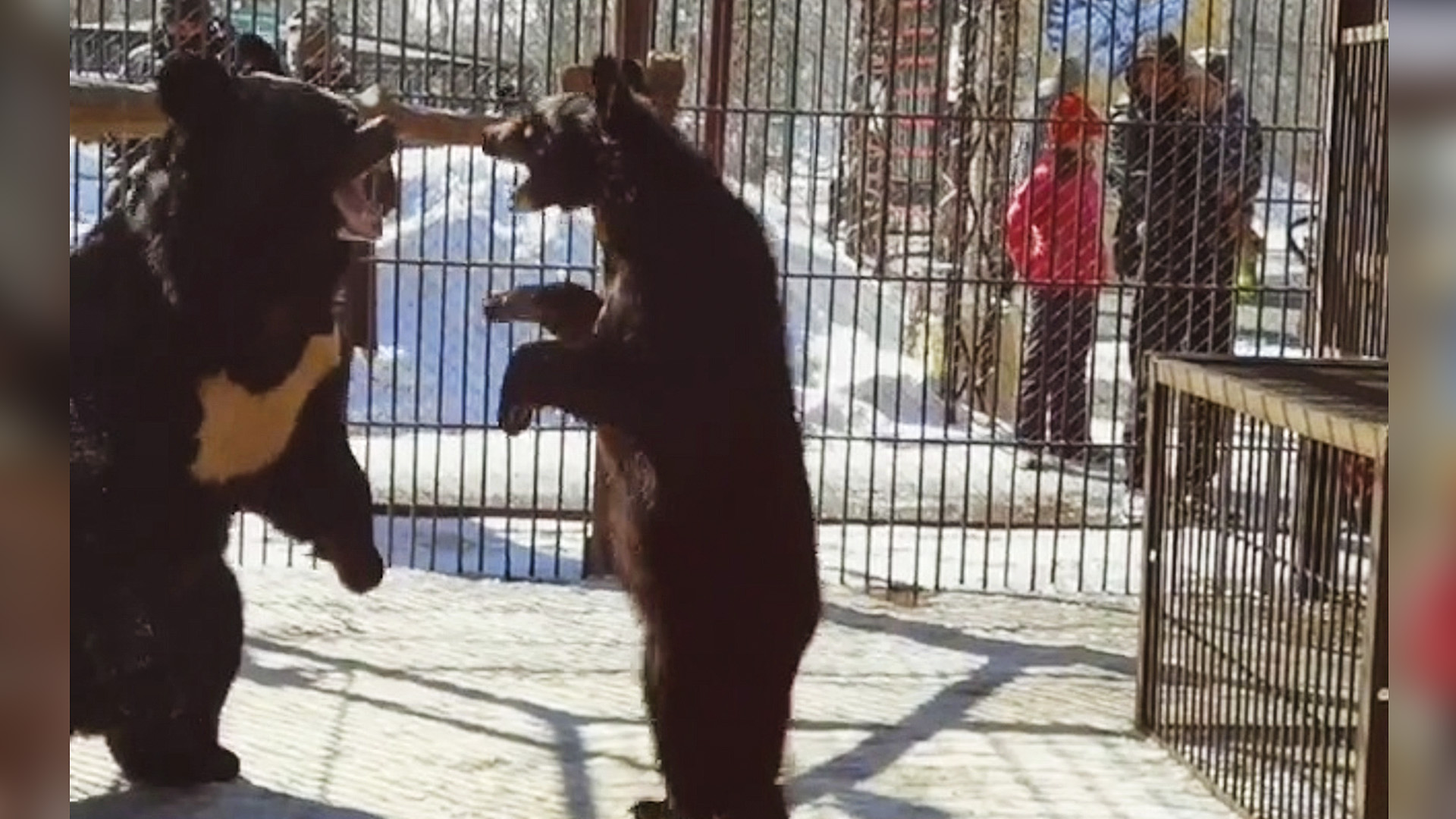 Himalayan black bears, Zhorikovich (the little one) and Zhora (the bear's father) at the Barnaul Zoo, Russia. (Barnaul Zoo/Newsflash)

BARNAUL URBAN DISTRICT, Russia — These images show two vulnerable Himalayan black bears kept in cramped and barren cages in a Russian zoo as the younger bear risks being badly mauled when sparring with his dad.

The footage was shot at Barnaul Zoo, in the city of Barnaul, in the south-central Russian region of Altai Krai, and was shared online, with people thinking they the two bears to be playfully fighting in a cage.

In the wild, cubs would be raised by the mother away from the father, who is a danger, especially for older males. Still, in the cramped and confined cage, the father and son are forced together and increasingly engage in these sparring activities that look like harmless fun – but it is dangerous to keep black bear fathers too close to their offspring.

The reality is, however, that in the cramped cage, there is little opportunity for them to avoid each other, meaning that the giant bear, called Zhora, a male, and the small bear, who is called Zhorikovich and is Zohra’s son, are forced to be together. Zhorikovich turned 1 in January this year.

Oxana Vasilieva, a spokesperson for the zoo, said that adult male Himalayan black bears “are unsafe around bear cubs” and that this is why they should “remain exclusively in the care of the mother bears.”

The mother bear’s name is Dasha, and she is well aware of the potential for conflict and will often step in between her cub and his father, but she is not seen in the footage on this occasion.

Vasilieva added that it was not possible to accommodate the mother in this case because of a lack of space.

“The bear’s parents live like a couple, but the mother does not leave her cub in the care of the father and does not even let him look in his direction,” the spokesperson said. “The father knows his obligations very well and stays as far away from Dasha and Zhorikovich as possible.”

Vasilieva said the little bear cub is very smart, and when his mother is not looking, he wants to play with his father.

“If the father starts to prove that he wins these games, the child immediately starts screaming, the mother comes quickly. The father, as always, argues with the mother.”

Vasilieva said that despite the risk, at the moment, both parents are playing their role in raising Zhorikovich.

“These bears are fed on porridge and dried fruit, and Dasha chooses fruit for the little one, and she eats only porridge, but Zhorikovich also wants fruit from his father.”

“In 2018, the Kremlin passed a law prohibiting cruelty to animals, guided by what is called the principles of humanity,” said Mimi Bekhechi, PETA vice-president. “Yet somehow this grotesquely inhumane imprisonment of bears in cramped, barren concrete cells, unable to experience any normal life, goes on.”

“The stress and frustration bears feel when forced to spend months and years reduced to beggars causes them such anguish that they try to cope by doing the only thing they can: pace back and forth, over and over again.Forcing naturally solitary animals into a situation where they are crammed together with others leads to heightened aggression and chronic anxiety.

“We urge President Putin to make good on those principles of humane treatment by banning the practices of keeping wild animals in cages, using them in circuses, and otherwise cruelly exploiting them for financial gain,” Bekhechi said.

This is primarily due to humans encroaching on their natural habitats. Other problems, also linked to humans, include forest fires, the wood industry, and poaching, despite a ban on hunting them since 1977. These issues have led to their habitat shrinking. The bears also suffer from a high newborn mortality rate.