Ambushes against foreign drivers by unknown insurgents has been likened to crossing into hell.
By Kelvin Ogome April 9, 2021
Facebook
Twitter
Linkedin
Email 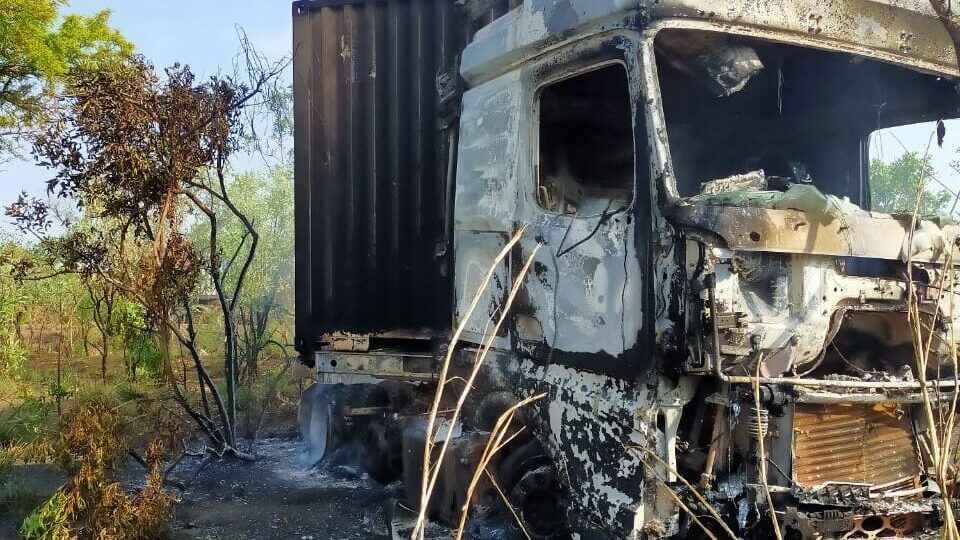 A damaged truck left at Nimule South Sudan after it was torched by Sudanese insurgents. (Kelvin Ogome/Zenger)

For more than a week, truck drivers from Kenya, Uganda and Tanzania have staged a strike, protesting the lack of security along the border-crossing highway.

On April 4, two truckers were stoned, killed and burned beyond recognition along the Juba-Yei highway in a spate of attacks that killed nine drivers from Kenya and Uganda. Their trucks were vandalized and torched by unknown insurgents who emerged from the bush.

“It was gruesome. I saw a new truck which was behind me being stoned. I had to speed off. It is so sad that my colleague died and was torched,” Ngon said.

“I have been here since Thursday, my mileage allowance is depleted. The food sold in Elegu cannot sustain thousands of us stranded here. We have been forced to go without food,” said trucker Juma Boy.

“This is the third time we are experiencing such attacks, but this time it is too much,” said Boy, who has been ferrying petroleum from Kenya to Juba for the last 10 years “We have no interest in Juba land politics, why are they targeting us?”

Entry to South Sudan has been likened to crossing into hell after a series of attacks against foreign drivers ferrying cargo to Juba.

The Long Distance Drivers and Conductors Association of Kenya, known as LODDCA, and the Kenya Transport Association, known as KTA, have set down their tools and pitched camp at the Elegu border, demanding security before they will cross over.

Although the motives for the attacks are unknown, truckers claim that anti-government rebels and civilian officers who oppose South Sudan President Salva Kiir Mayardit are targeting truckers in a bid to sabotage services in the entire republic.

Foreign truckers have issued a notice demanding peace and insisting on security measures from the South Sudan government.

Antony Mutua, LODDCA chairman, has demanded the government of Kenya immediately suspend all activities with South Sudan until security is restored and an apology is made for the killings of drivers.

“We are annoyed by the killings, we are saddened as LODDCA, and we demand that our Kenyan government immediately suspends cross-border operations with South Sudan,” Mutua said.

The Koboko Member of Parliament Margaret Baba Diri has called on authorities to take action.

“The Sudanese are leading a peaceful life in Uganda. We don’t kill them. This issue is very painful. South Sudan should act immediately,” she said.

In South Sudan in 2016, pro-government troops who had worn a battle against rebels in the capital, Juba, went on a four-hour rampage in an area of the city inhabited by foreigners. They killed a number of foreigners, particularly Americans, raped women and shot and killed a foreign journalist.

In the last 12 months, more than 1,000 civilians, government security officers and rebels have been killed, mostly in ambush attacks.

“Some abuses may constitute war crimes or crimes against humanity. All sides restricted access to United Nations, ceasefire monitors, and aid workers. Since the conflict started in December 2013,” the report states, “more than 4 million people have fled their homes, with 2.1 million taking refuge in neighboring countries,” the report states.

«Previous Post
Farmers From Australian State Repeated Victims Of Crime»Next Post
For Many African Refugees, Uganda Is The Hoped-For Route To The West