The home of Darwin's studies is now threatened by an endless tide of rubbish washing up on the beaches.
By Ana Lacasa April 8, 2021
Facebook
Twitter
Linkedin
Email 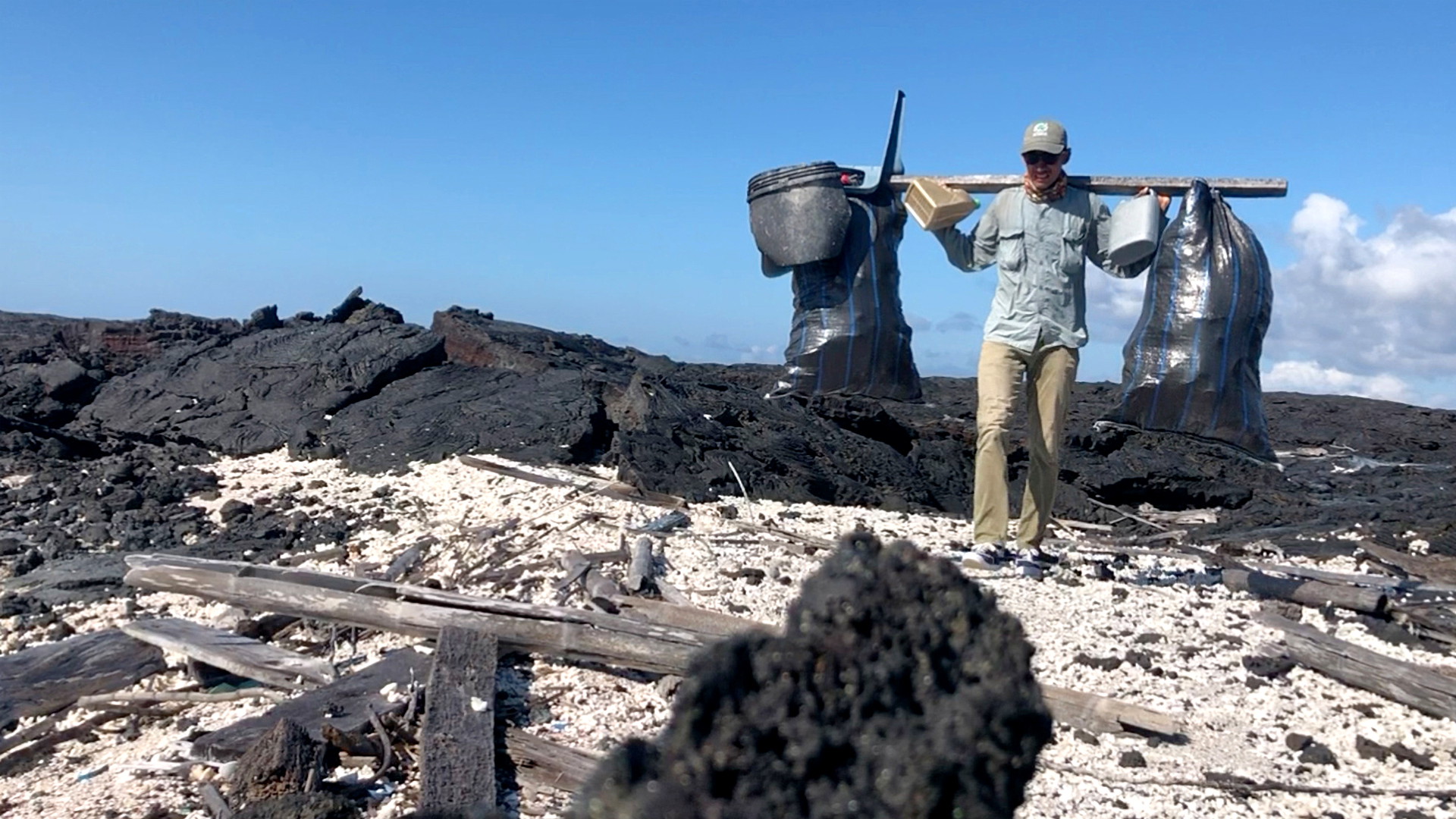 GUAYAQUIL, Ecuador — Several tons of rubbish were collected by volunteers, park rangers, and anglers who worked for a month to clean up the Galapagos Islands National Park.

The National Park is home to many rare and fantastic species. If the plastic is not removed, it runs the risk of being ground down and broken up and eventually being eaten by animals, often leading to a painful death.

The group of 18 people worked for a month in the volcanic archipelago that was made famous by Charles Darwin, in particular, worked in the islands of Genovesa, Pinta, and Santiago, in Ecuador and collected in one week alone 2.1 tons of garbage.

This was the second phase of the cleaning process done by the authorities.

“To select the intervention places we were based on the historical information we have, the evidence for the last years allows us to know the place with more impact of oceanic garbage,” said Galo Quezada, park ranger in charge of the clean-up activity.

The first one took place in February and collected 2.5 tons of rubbish. The next expedition will take place in April.

In the second phase, which consisted of a week traveling around those areas, the workers checked around 22 kilometers of coast, where the team collected, classified, and registered the garbage.

The information gathered during those trips will be added to the database of the program of Coastal Cleaning and Marine Garbage management of the direction of the National Park of Galapagos.

After the workweek, the garbage was taken to the island of Santa Cruz, collected in 277 bags, including 18,177 plastic bottles from different places.

The garbage will be sent to the autonomous government of Santa Cruz to be managed.

The cleaning program always has three trips in the year. The first one took place in February when 2.5 tons of garbage was collected. 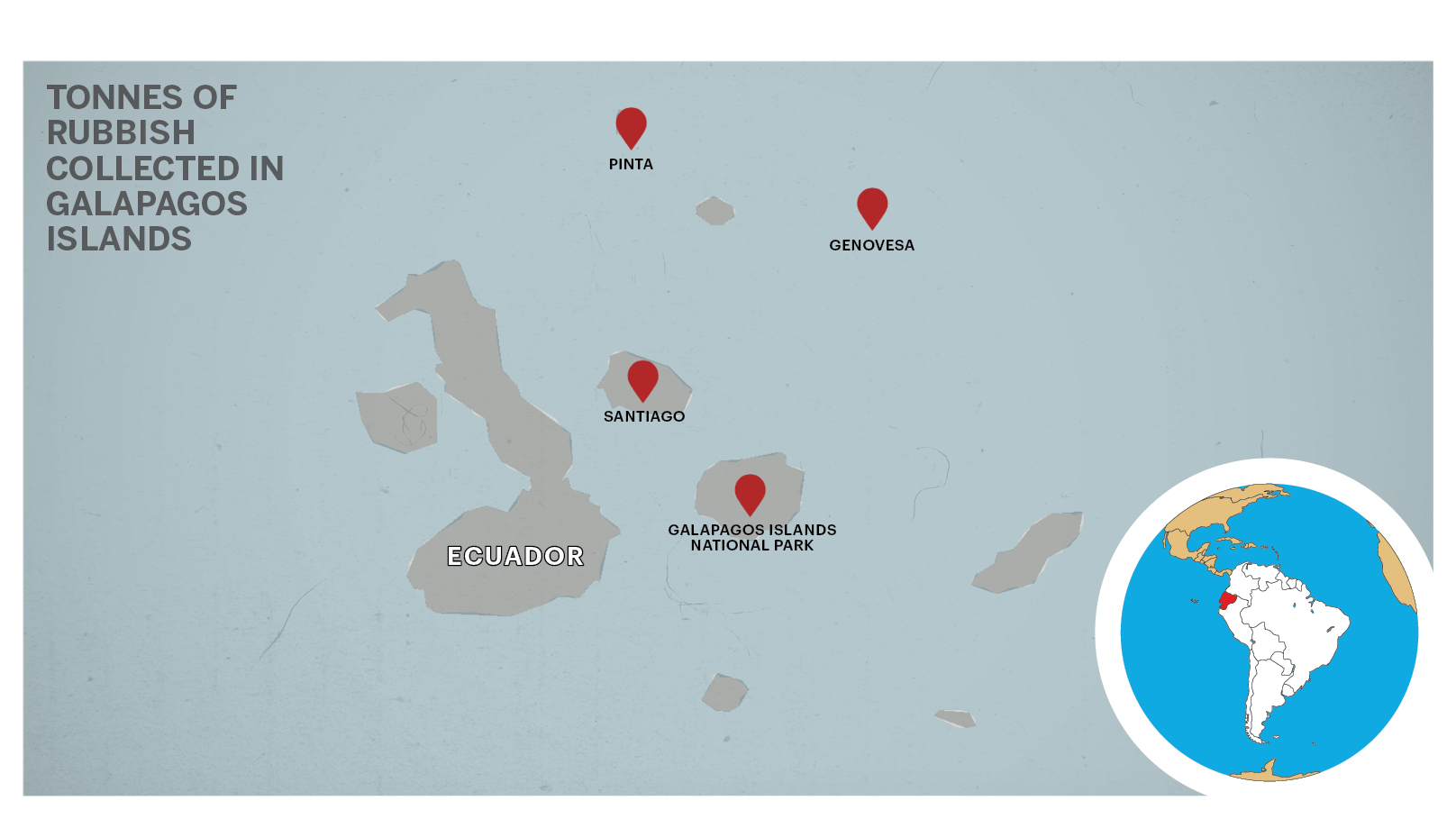 The waste material thrown into the sea worldwide is the reason for the rubbish turning up on the Galapagos Islands. It is eventually turned into microplastic, one of the biggest threats for iguanas, tortoises, birds, and fish that are endemic from the island, used by the British scientist Charles Darwin for his theory of species evolution.

The garbage reportedly arrived on the island thanks to the marine currents.

The solar radiation and salt of sea degradants the bottles and other plastics, when crashing to the stones of the coast, are turned into microplastic that is later eaten by the animals living there.

“Ecuador has a strong position against the marine garbage as it is one of the more urgent environmental problems in the last years, not only nationally but also internationality,” said Marcelo Mata, Minister of Environment and Water of Ecuador.

Mata participated in the Talk of High Level towards a new Global Agreement about Marine Garbage and Plastic Pollution organized by the United Nations’ Program for the Environment.

“These coastal cleaning activities make it possible to significantly reduce the accumulation of floating garbage in coastal and subtidal areas, which has a direct impact on the protection of marine fauna,” the National Park said in a press statement. “For the Environmental and Water Authority, this initiative strengthens the conservation management of the islands and their wildlife and will also benefit the health of marine ecosystems and their natural balance.”