Meat Up: Taco Varieties Abound, But Carnitas Are The Most Popular 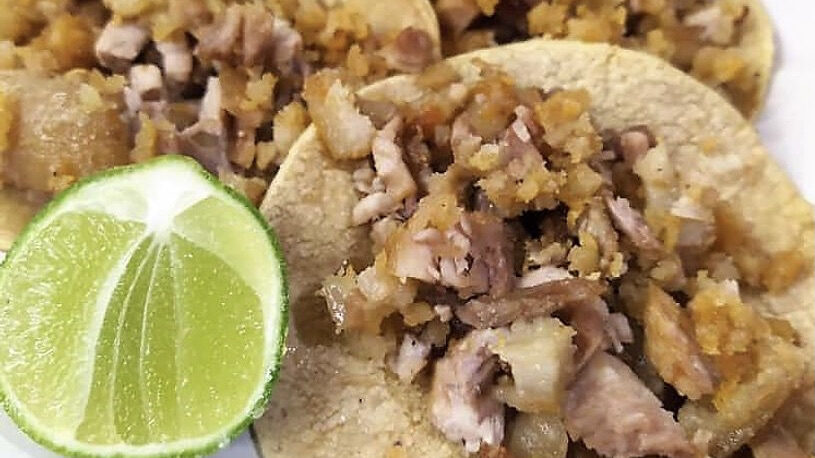 Michoacan-style carnitas tacos are one of the many taco variations that exist in Mexico. (Taquería Don Chelo)

Tacos are one of Mexico’s dishes with the most variety. Among the many kinds of tacos — pibil, canasta, barbacoa — one of the most popular is the Michoacan-style carnitas tacos.

“I have been in the taco business for 50 years. Michocan-style carnitas tacos are but one of the different kind of tacos that we offer here,” said Humberto Saucedo Valdés, owner of the Don Chelo taqueria in Boca del Río, Veracruz. “Michoacan-style carnitas consists of variations such as lean meat, mixed meat, skin, leg and rib tacos. I serve each taco with one or two tortillas, depending on how the client wants it.”

However, a taco is only as good as what tops it.

“A carnitas taco must be served with cilantro and chopped onion,” said Saucedo Valdés. “The salsa depends on each customer. I offer them salsa verde and ranchera, as well as a pico de gallo made with red onion, lime and habanero pepper. The perfect taco is eaten using only one hand.”

Mexican cuisine has earned international recognition, as it is one of the few cuisines declared as Cultural Heritage of Humanity. Tacos are probably its most visible dish.

To celebrate the rich history of the carnitas taco, in 2019, the Mexican state of Querétaro created the world’s largest carnitas taco, measuring 102 meters. They needed more than half a ton of carnitas.

For the best carnitas, Saucedo Valdés says the correct way to prepare them is to have pork meat of excellent quality, lard, and add orange juice, cola, milk and two garlic bunches. The cooking takes about two and a half hours, and its aroma is liable to make anyone’s mouth water.

Although it is a dish sold in many popular taquerias, most people prefer to eat them at the many taco stalls in Mexico’s streets and avenues. Before the COVID 19 pandemic, people would congregate and eat their fill.

“I can eat up to 15 tacos,” said Horacio López Villanueva, a taco lover in Veracruz. “My favorites are ribs, skin and mixed tacos, with a healthy topping of chopped onion, cilantro and salsa verde. However, the perfect taco must be accompanied by an ice-cold Coca-Cola.”

López Villanueva prefers street stalls over traditional taquerias, as he feels they offer a better quality of meat and salsa.

“The most important part on how to make a good carnitas taco depends on the meat’s preparation. Therein lies the success of a taco stand. However, salsas are also extremely important. Good salsa and excellent meat are the secrets to success,” said López Villanueva.

Maciza — lean meat — is the most popular version of carnitas, although many prefer it mixed with liver and fried skin (surtida.)

How to prepare it

In a saucepan, place the lard over medium heat until it is completely liquid and begins to boil. Add all the pork cuts and cook for an hour. Add the salt, onion, garlic bunches, sliced oranges, juice, cola, and milk, and cook for an additional hour.

Remove the pork pieces and drain the excess lard. Finely chop the carnitas and serve them on tortillas. Add cilantro and onion to taste. Add lime and salsa to taste.